Crocodiles’ ancient ancestors may have walked on two legs 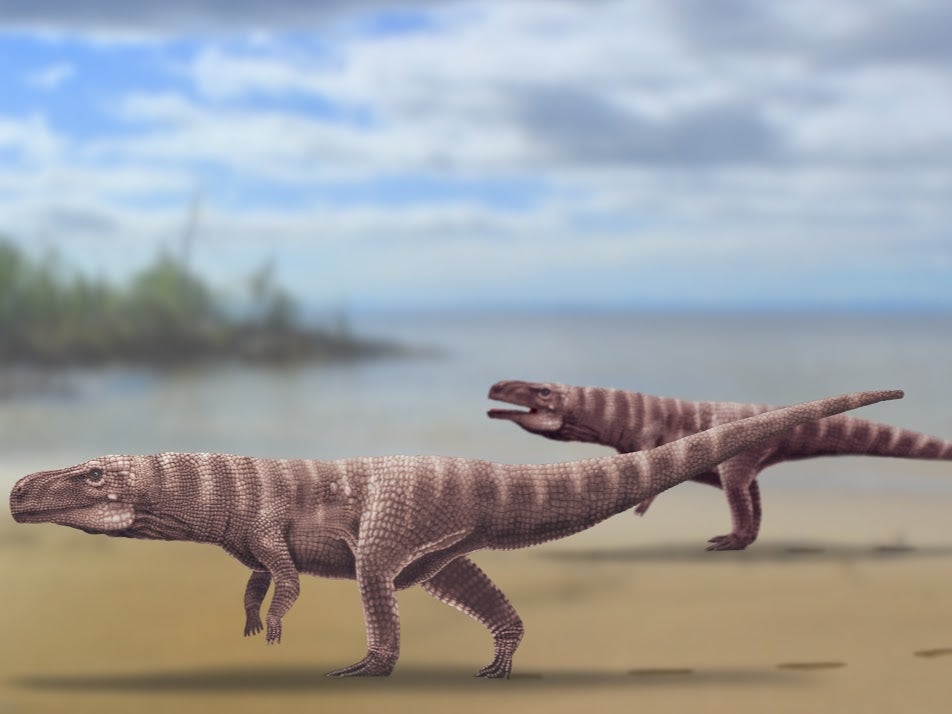 Researchers identified a series of 9-inch-long prints as belonging to an extinct ancestor of the modern crocodile. The animal appeared to walk on two feet. Anthony Romilio, The University of Queensland, Brisbane, Australia
SHARE

More than 100 million years ago, an ancestor of today’s alligators and crocodiles wandered through present-day South Korea on its hind limbs, scientists announced June 11 in the journal Scientific Reports. The researchers identified a series of 9-inch-long prints as belonging to an ancient crocodylomorph, a group that includes living crocodilians (alligators, crocodiles, and other similarly-sized reptiles) and their extinct relatives. The tracks were all created by the animal’s back feet, indicating that it had a two-legged gait.

“Here in one site we have the first really definitive evidence of bipedal crocodiles,” says Martin Lockley, a paleontologist at the University of Colorado Denver and coauthor of the new findings. “These animals are always walking in a narrow trackway, one foot in front of another, [and] never have any front footprints.”

The footprints, which were discovered near Sacheon City along the southern coast of South Korea, initially puzzled researchers. When Lockley visited his colleagues last November, they discussed whether the odd tracks might have been left by a giant pterosaur. The researchers had previously speculated that the flying reptiles were responsible for other poorly preserved tracks found in South Korea; by walking upright while on land, the pterosaurs may have kept their wings from becoming mired in the muck.

However, Lockley suspected that the new prints had been created by a very different sort of creature. Overall, the tracks reminded him of much smaller ones he’d seen from sites in North America, Europe, and Africa. Scientists previously attributed these 1 to 3-inch prints to petite crocodylomorphs about the size of housecats that lived during the Jurassic Period, about 200 million years ago.

When Lockley and his colleagues visited the site, they were able to examine numerous footprints that formed 17 different paths, or trackways. “The foot structures were very, very well preserved,” Lockley says. “You can see every detail of the pads on the foot clearly.” On one track, the heel area showed well-defined impressions of scales resembling those typically seen in modern crocodilians.

The shape and structure of the new prints, which dated to the early Cretaceous, closely matched those left by the cat-sized crocodylomorphs. Their larger size, however, hinted at a crocodylomorph that reached up to 10 feet in length. And there was another crucial difference: Unlike its more ancient cousins and modern-day crocodiles, this crocodylomorph did not trot along on all fours. The narrow trackways it left behind suggest the animal moved in a straight line, similarly to a human, rather than waddling along on four widely-splayed feet.

“These things probably patrolled the lake shoreline looking for dead fish or…animals that they could hunt,” Lockley says. “But they weren’t like modern crocodiles; they weren’t adapted to living in the water.”

The new findings also indicate that the poorly-preserved large tracks that had mystified his team before were made by a bipedal crocodylomorph rather than a giant pterosaur, he says.

The researchers make a compelling case that the new tracks were created by an ancient crocodile relative, says Anthony Fiorillo, a paleontologist at Southern Methodist University in Dallas who was not involved in the work. “The tracks are beautiful; there is no question about that,” he says.

It’s possible that the newly described crocodylomorphs laid down their tracks while swimming rather than walking on two feet, says Fiorillo, who has published research describing a set of tracks in Mongolia created by a crocodylomorph that likely used its feet to “punt” along the bottom of a shallow waterway. Modern crocodiles have also been observed using their hindfeet to punt through the water. However, Lockley and his team argue, these tracks are typically less neat and complete than the ones they examined.

Lockley and his colleagues gave the prints the name Batrachopus grandis. The descriptive names assigned to ancient footprints are separate from species names bequeathed on fossilized bones, such as Tyrannosaurus rex. “If we’re really lucky, we’ve got the whole foot skeleton and we can compare them to see if they fit like Cinderella’s shoe,” Lockley says.

Even when they cannot be matched to a particular kind of dinosaur, footprints are still a valuable window into prehistoric ecosystems. “Bones just tell us who was at the dance; the tracks tell us the behavior, what they were dancing,” Fiorillo says. “So tracks are very important, but there’s a lot of ambiguity to it.”