These ancient, swimming reptiles may have been the biggest animals of all time

England's ichthyosaurs have changed the course of paleontology again. 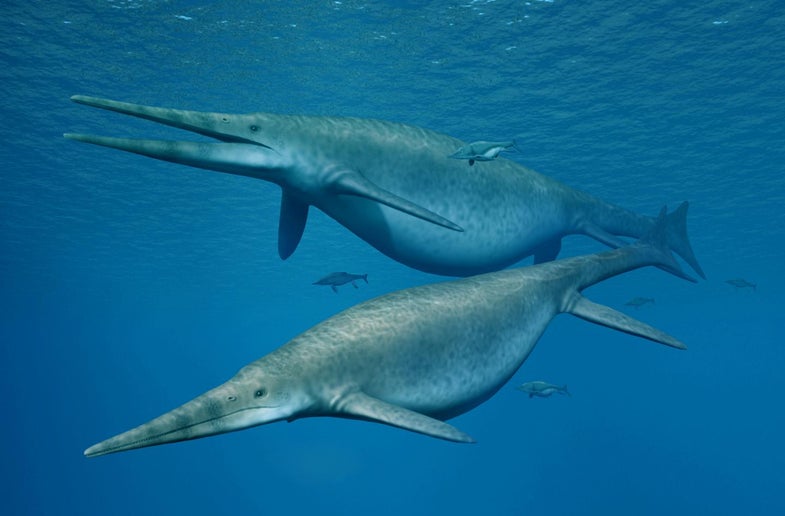 In 2016, Paul de la Salle was walking along the beach in the British town of Lilstock when he came across a rock that looked suspiciously bone-like. Specifically, a 205-million-year-old fragment of bone, possibly belonging to the jaw of a long-extinct ichthyosaur.

De la Salle is an amateur fossil hunter, so he knew to call experts Dean Lomax and Judy Massare to confirm the hunch. And it turned out to be quite the find: The three-foot-long piece of jawbone de la Salle eventually assembled from the Lilstock beach may have belonged to a creature as much as 85 feet long. Their research, published this week in PLOS ONE, would put the giant ichthyosaur above even the blue whale, commonly agreed to be the largest animal ever to have lived on Earth.

Ichthyosaur comes from the Greek words for “fish lizard,” but ichthyosaurs were neither fish nor lizards (nor dinosaurs, for that matter). Like modern day whales, they evolved from terrestrial creatures that did an about-face and returned to the sea, from whence all life on Earth once sprang. Unlike whales, the ichthyosaurs’ ancestor was not a mammal but a reptile, and it made its watery homecoming sometime during the early Triassic period, back when whale ancestors were still scurrying around on land laying eggs. But once there, the creatures developed the streamlined body and powerful, paddle-shaped fins of a dolphin, along with the marine predator’s toothy beak. And though they were reptiles and not mammals, ichthyosaurs gave birth to live young and were likely warm-blooded.

Lomax, of the University of Manchester, measured the Lilstock fragment—a bone of the lower jaw called the “surangular”— and quickly understood that this was something special: “I wasn’t entirely sure how big the estimate would turn out to be until I saw the specimen in person,” Lomax says. He and Massare, a professor and marine reptile expert at the State University of New York at Brockport traveled to Alberta’s Royal Tyrrell Museum of Paleontology to compare the new find to the largest ichthyosaur specimen previously known. The Lilstock surangular was approximately 25 percent larger than the matching bone in the museum specimen. (That behemoth, now dethroned as the largest of the giant ichthyosaurs, is just shy of 70 feet.)

The discovery not only changes our understanding of the ichthyosaur’s range of sizes, but gives a new explanation for unidentified bones uncovered in Gloucestershire in the 1850s. Those fragments were so large that scientists at the time assumed they must belong to dinosaurs; something massive and land-based, like a stegosaurus or a sauropod. But Lomax, along with Massare and de la Salle, posit that these bones are also ichthyosaur jawbones. No one had ever imagined the delicately delphine ichthyosaur could approach the size of the giant beasts that walked the ancient earth, or that these giants persisted for so long—the newest specimen dates to the Late Triassic, meaning giant ichthyosaurs existed until the mass extinction at the end of the Triassic.

England’s limestone cliffs are studded with the petrified history of the ichthyosaur. Long before Paul de la Salle took his long walk on the beach, a pair of young siblings on the other side of England’s jutting southwestern foot found a skull embedded in the crumbling, white cliffs. It was 1810 and the country was in the early stages of what would become full-blown fossil mania. One of those siblings, then 12-year-old Mary Anning, later returned to excavate the rest of the skeleton: a fan of ribs furled around the 60 vertebrae of the spinal column. It would turn out to be the first ichthyosaur specimen ever recovered.

The Annings lived in the town of Lyme Regis, and supplemented a meagre income by selling fossils to collectors and tourists. Anning’s parents and her brother Joseph hunted for bones among the cliffs, but it was Mary who turned it into a career, venturing along the unstable cliffs with her dog, Tray. At a time when women were not often educated—let alone encouraged to become scientists—Mary Anning taught herself geology and paleontology. She often illustrated and classified the specimens she found, though she rarely earned a byline in the scientific journals where male naturalists described her finds.

Anning is perhaps most famous for unearthing the first complete plesiosaur skeleton, a specimen so large it caught the attention of Georges Cuvier, who went on to formulate some of the earliest theories about extinctions. Her discoveries are also thought to have informed Darwin’s thinking on evolution, along with countless other scientists far more famous in their time than Anning. Nevertheless, in 2010, 200 years after she first came eye to eye with the ichthyosaur in Lyme Regis, Mary Anning was named one of the ten “most influential British women in science” by the British Royal Society.

Anning’s ichthyosaur was described by Everard Home in 1814 as an enigma somewhere between lizard and fish, a full 17 feet from nose to tail. Anning’s life, too, was a strange mix, her success and the eventual respect she earned from a handful of British paleontologists countered by lifelong poverty and an early death. Her ambition was outsize to the age she was born into, but her story, exhumed, continues to grow in import. In 2015, more than two centuries after Anning’s ichthyosaur came to light, Lomax and Massare named a newly identified species after the pioneering paleontologist: Ichthyosaurus anningae. And her work continues to inform the inquiries of scientists today. “I’ve spent the past decade tracing her footsteps, examining the many specimens she collected,” Lomax wrote. “She was an incredible woman.”