Pumped storage hydro once propped up coal and nuclear power. Now it's essential for a clean, growing grid. 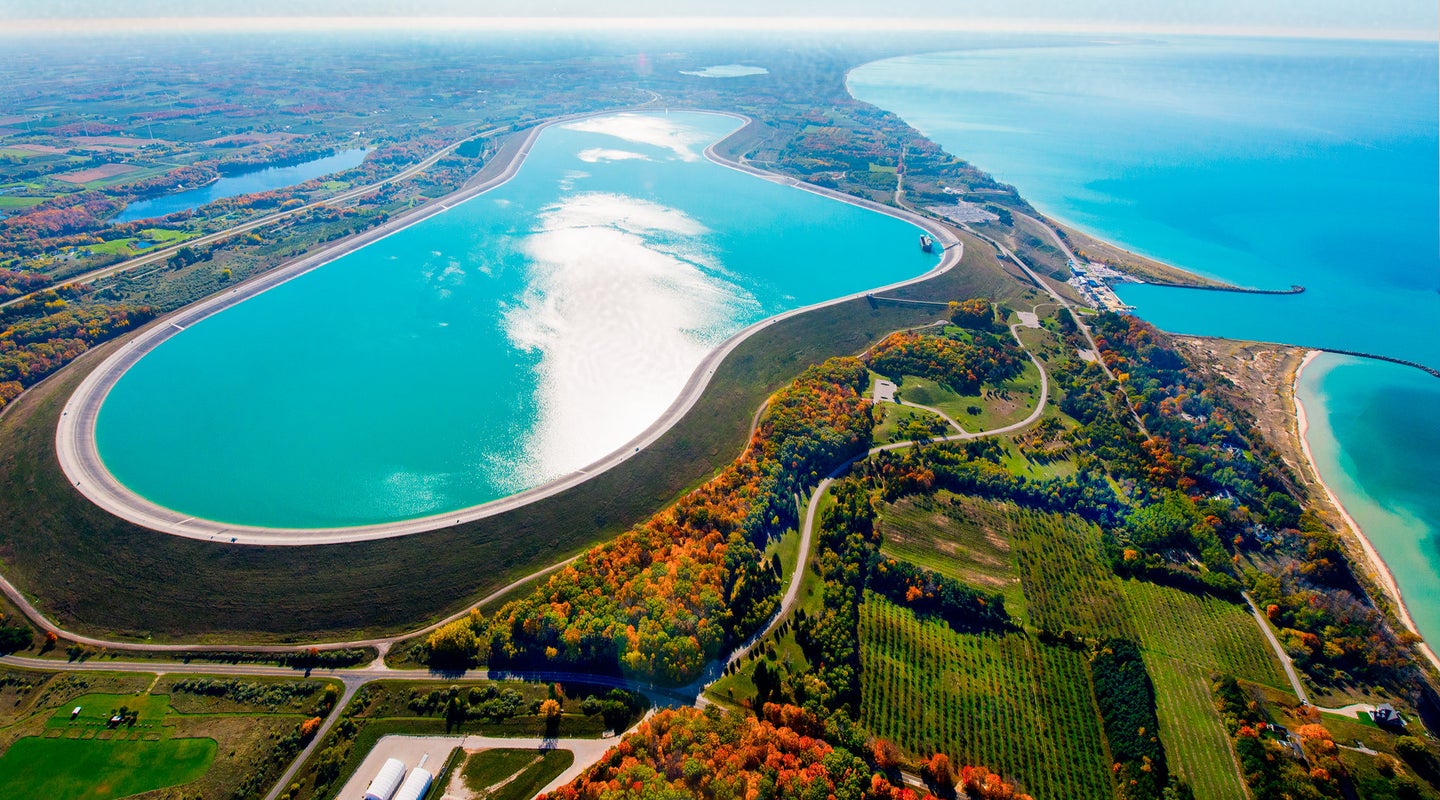 The Ludington Pumped Storage Plant in Michigan was the largest facility of its kind when it opened in 1973. Today, however, the US has fallen behind other countries like China in pumped storage capacity and innovation. Consumers Energy
SHARE

Along the golden hills of the eastern Columbia River Gorge, the 338 turbines of the Shepherd’s Flat Wind Farm twirl with the breezes, churning out enough electricity to power 200,000 Oregon homes.

Like other parts of the US rushing to transition away from fossil fuels, the Pacific Northwest’s grid is increasingly reliant on wind farms like this one, in addition to solar arrays. That’s great when the wind blows and the sun shines, but as anyone who has walked the drizzly streets of Seattle can attest, you can’t always count on that. To guarantee a smooth, carbon-free supply of electricity despite this variability, the grid requires enormous amounts of energy storage, and projections indicate that the region needs up to 10,000 megawatts of backup reserves to meet 100-percent renewable power goals.

Further down the Columbia River Gorge, about a hundred miles east of Portland, Oregon, a 650-acre facility from Copenhagen Infrastructure Partners and Rye Development could help make up some of that looming storage deficit by tapping a century-old technology called pumped storage hydro.

Originally used to hold power from coal and then nuclear plants, pumped storage hydro taps surplus energy from the grid to push water from a lower reservoir up to a higher one. When utilities need the power back, flows are released through a hydroelectric turbine, generating electricity. Some designs use a natural water body for one or both of the reservoirs (called “open loop”), while others circulate water between a pair of standalone reservoirs (called “closed loop”).

Existing pumped storage hydro accounts for about 95 percent of America’s 23,200 megawatts of energy storage capacity. But as power consumption and blackouts escalate, more such projects, big and small, will be needed to support grids across states.

If built—the project has to receive one final permit before construction can start—Copenhagen and Rye’s Goldendale Energy Storage Project would be the largest development of its kind in the region, capable of cranking out 1,200 megawatts of electricity for up to 20 hours, equivalent to about 500 wind turbines running at full speed during that period. By contrast, the lithium-ion batteries coming online all around the country rarely supply more than 100 megawatts of electricity for more than four hours—any more and they’re no longer cost-effective. Pumped storage hydro systems are only limited by the size of the reservoir.

The project, which is expected to come online in 2028, would also be one of the first new pumped hydro systems built in the US in decades. Construction in other states has long been stalled by high capital costs, environmental concerns, and competition from other storage technologies. But with renewed urgency for decarbonization, pumped hydro could be poised for a comeback.

“It aligns with a low-carbon future,” says Stephanie Lenhart, a researcher with the Energy Policy Institute at Boise State University. “That’s really what’s invigorating this technology that was developed to help coal and nuclear plants.”

Unlike the many newfangled energy storage schemes out there, pumped storage hydro has been around for a long time. In fact, in 1929, Popular Science covered the country’s first such plant, a “10-mile storage battery” just off the Housatonic River in New Milford, Connecticut. The author marveled that the plant, still in operation today, could store more energy than all the automobile batteries in the country at the time.

Today, there are more than 22,000 megawatts worth of pumped hydro capacity in the US, which compares to about 9,000 wind turbines spinning at full speed. The majority of those systems were built in the 1970s and 1980s to stash excess nuclear power.

Depending on the rate of renewable-energy growth, that capacity could more than double by 2050, according to the US Department of Energy’s 2016 Hydropower Vision Report. In just the past year, the Federal Energy Regulatory Commission has granted preliminary permits for more than 30,000 additional megawatts of pumped hydro capacity, including a multi-billion dollar proposal by the power-starved city of Los Angeles to add the technology onto the Hoover Dam.

While it’s too soon to say how many, if any, of those projects will actually get built, the surge in permits could indicate that the market is changing to value energy storage, pumped hydro included.

“For the first time in a while we’re really seeing a lot of focused interest on new pump storage development,” says Alejandro Moreno, the Acting Deputy Assistant Secretary for Renewable Power at the US Department of Energy. “We’re hearing from regulators that they see the value in these assets.”

There are other signs that the technology could be making a comeback in the US. With the national spending bill passed at the end of last year, Congress put a billion dollars over the next five years towards research and development in the energy storage field. And last year, an unlikely coalition of hydroelectric energy companies and environmentalists even said pumped storage hydro development is one place they see eye-to-eye, especially when it comes to closed-loop designs and the possibility of retrofitting existing dams.

Most classic pumped storage hydro systems, like the one in New Milford, are open-loop, meaning that water pumped through the system is diverted from rivers and other natural sourcess. Goldendale and other recent proposals adopt a closed-loop approach, which avoids the need for costly and environmentally destructive dams. The newer design also expands the number of sites suitable for pumped hydro to wherever a lower reservoir can be connected with a higher reservoir (see map below).

Though the future is still an open question, there may be a lot of interest in smaller (think less than a gigawatt) projects that could be scaled up over time, says Brennan Smith, who manages the Water Power Technologies Research Program at Oak Ridge National Laboratory, which is sponsoring research to make pumped hydro cheaper and more versatile. These include new designs that harvest energy by pushing water underground and using the resulting pressure to spin a turbine—a technique that could be used in places as flat as the Texas plains.

New designs have also made pumped storage hydro more adaptable to different grid demands, says energy researcher Lenhart. “It’s always been very flexible in terms of when it can provide power, but it’s an even more diverse technology than it used to be.”

Even with all this action, American development in the sector is nothing compared to other countries. China, for instance, currently has around 40,000 megawatts of pumped hydro capacity and 20,000 more in the works, including the largest project ever currently under construction in a cave north of Beijing.

With all the innovation, pumped hydro still faces financial and political obstacles in the US, Smith says. The systems are expensive and can take up to a decade to build, making it hard to attract investment. And while the new designs promise to help, geographical limitations and environmental impacts remain. Goldendale, for example, has met opposition from the Yakima Nation and environmental groups concerned that the project would threaten culturally significant sites and nearby golden eagle habitat.

Pumped hydro also has to compete with increasingly cheap lithium-ion battery storage, which can be installed anywhere and provides the kind of short-duration backup the market currently values. Even as more of America’s grids are powered by wind and solar, Moreno says, “long-duration storage is much less likely to get built if you don’t have financing mechanisms that provide some certainty and revenue.”

Yet Lenhart argues that at a certain level of renewable penetration—around 80 percent, depending on the mix of sources—the short-duration storage provided by batteries will be inadequate to support the grid. There are other emerging technologies that can provide energy storage over long durations, such as flow batteries, which rely on giant tanks of electrolytes to provide emergency power, or green hydrogen, which generates carbon-free fuel from spare renewable energy and water. But pumped hydro is the only long-duration option available right now—and it has a hundred-year history to back it up.

At that point, Lenhart says, we may need the capacity and consistency pumped hydro can offer during windless doldrums, through the night, or both at once. “If we don’t do something now to start investing in this,” she says, “we won’t have it when we need it.”

James Dinneen is a science and environmental journalist from Colorado, based in New York. Read more of his work on his website.