Do you have as much self-control as a Goffin cockatoo? 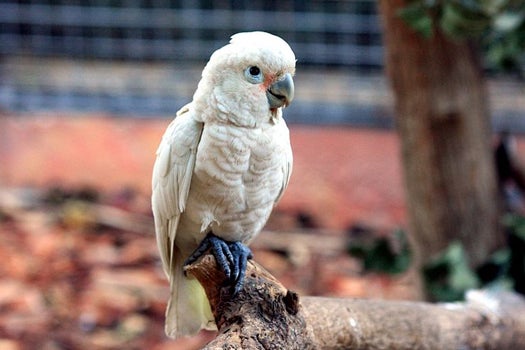 Could you hold a cookie in your mouth for a minute without eating it, if you were promised something even more delicious in exchange for the wait? Most animals can’t control their impulse to gobble up the food in front of them. Humans, primates and corvids (a family of hoarding birds such as crows and ravens that already save food for later) can all delay delicious gratification for a minute or longer, but most animals can’t wait more than a second or two. New research from the University of Vienna suggests that cockatoos also can also be trained to resist instant gratification for something more tempting down the road.

A study on an Indonesian variety of parrot, the Goffin cockatoo, in Biology Letters this week is the first to show that a non-hoarding bird possesses a significant amount of self-control. Cockatoos have already shown themselves to be smart cookies, displaying mad dance skills and the ability to use tools. 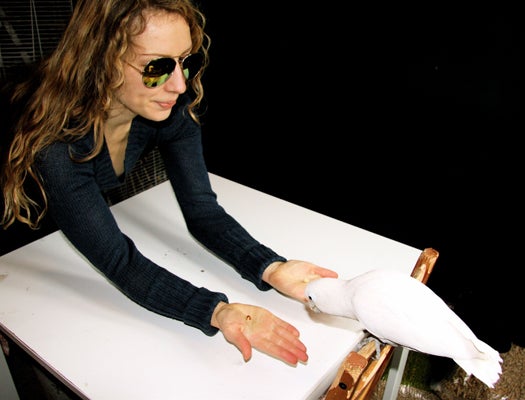 A total of 14 cockatoos were trained to keep an inedible object in their mouth and return it to the researcher’s hand in exchange for a preferred reward (a nut or a piece of meat). Next, the researcher held two hands out, one with an initial food item (a tasty pecan) and one with a greater reward, either more pecans or a more delicious cashew. The cockatoo had to pick up the initial item, while the reward hand stayed within sight but out of reach. After the delay, they could trade for the better food.

The Goffins weren’t able to last the full five minutes that corvids are capable of, yet they were able to resist temptation for an impressive 80 seconds. Delayed gratification shows a higher level of cognition because it requires not only impulse control, but the ability to perform the cost-benefit analysis of is waiting worth it?

“While human infants or primates can hold the initial food in their hands, one should also consider that the birds were able to wait, although they had to hold the food in their beaks, directly against their taste organs while waiting,” says Alice Auersperg of the Vienna Goffin Lab. “Imagine placing a cookie directly into a toddler’s mouth and telling him/her, he/she will only receive a piece of chocolate if the cookie is not nibbled for over a minute.”

Delayed gratification studies with human infants are complicated for other reasons. Famously, a psychology study in the 1970s promised children they could have two marshmallows if they could resist the temptation to eat the first one for fifteen minutes. Further analysis has suggested that strategic thinking rather than self-control may be at work: Children who don’t trust that the second marshmallow will actually appear will eat the one marshmallow immediately rather than risk getting none at all.

That effect probably wasn’t at work here with a group of lab-raised cockatoos. The Goffins were more interested in upgrading the quality of their treat, not the quantity, and had more impulse control when it came to exchanging for a better reward than for more of the initial reward.

“Like corvids and some primates, [Goffins] acted much like economic agents,” the authors write, “flexibly trading-off between immediate and future benefits relative not only to the length of delay, but also to the difference in trade value between the currency and the item on auction.”