The Triassic die-off is one of 5 mass extinctions on Earth in the past 542 million years. We all know a gigantic asteroid is to blame for wiping out the dinosaurs–but what wiped out the animals that came before them? A changed climate, brought about by devastating volcanic eruptions, may have cleared the way.

New research strengthens the argument that more than 200 million years ago, massive volcano eruptions spewed gargantuan amounts of noxious gas into the atmosphere, causing catastrophic global warming and acidification of the oceans.

About 76 percent of the life forms on Earth perished, in a terrible die-off known as the Triassic-Jurassic extinction event. It wasn’t as bad as the Permian-Triassic Great Dying some 50 million years prior, but it was bad enough that half the species living on this planet disappeared. With plenty of new ecological niches to fill, dinosaurs took over the Earth for the next 135 million years.

Scientists have suspected that mega-volcanism and resulting climate change may have played a role in all this, but it was difficult to show correlation. Now researchers have the tightest link yet: A new date for the End Triassic Extinction at 201,564,000 years ago, exactly the same time as a massive outpouring of lava across all the land.

“This may not quench all the questions about the exact mechanism of the extinction itself. However, the coincidence in time with the volcanism is pretty much ironclad,” coauthor Paul Olsen, a geologist at Columbia University’s Lamont-Doherty Earth Observatory who has been investigating the boundary since the 1970s, said in a statement.

This happened when all the land on Earth was connected in a megacontinent. The titanic eruptions caused a rift in this continent that ballooned into the Atlantic Ocean. Now, evidence for the cataclysm can be seen in North America, South America and Africa. Olsen took a chunk of rock from the Hudson River Palisades, a few hundred yards from the New Jersey side of the George Washington Bridge. Below, a basalt deposit near a retirement home in Clifton, N.J., shows the lava flow in gray and sedimentary rocks–signaling the extinction–in red. 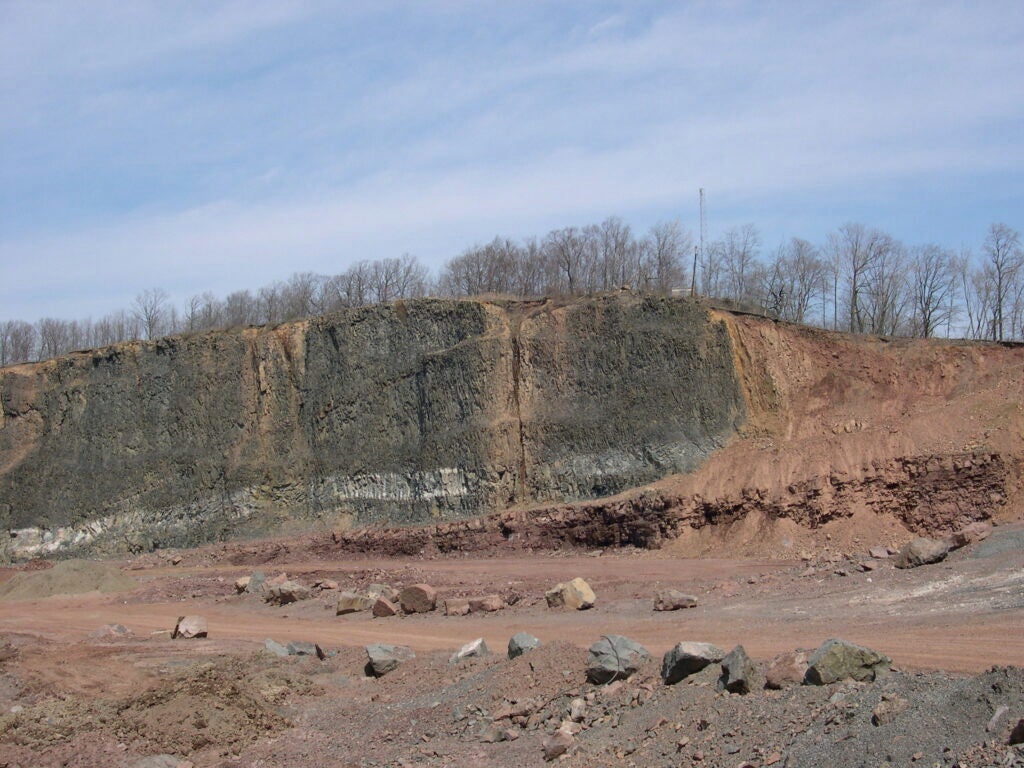 In Clifton, New Jersey, a massive basalt flow (black rock on left) from the time of the End Triassic is exposed in a former quarry, now located behind a retirement home. Reddish sedimentary rocks signaling the extinction itself lie to the far right.

The team was not looking for fossils per se, but evidence of changes that set the stage for dinosaurs. They were able to date sedimentary deposits with great precision, matching them to certain kinds of crystals found in ancient lavas. This technique set new constraints on the die-off, and found it matches right up with the evidence of volcanism.

The actual mechanism of death is not as clear, however. Climate change is the most likely culprit, caused by massive belchings of sulfur, carbon dioxide and other toxins into the atmosphere. Acidic oceans, which would have hampered the ability of many creatures to produce their shells, is another possible explanation. The study appears today in Science.