The Army Corps of Engineers is nearly out of options for keeping a section of the upper Mississippi River flowing. 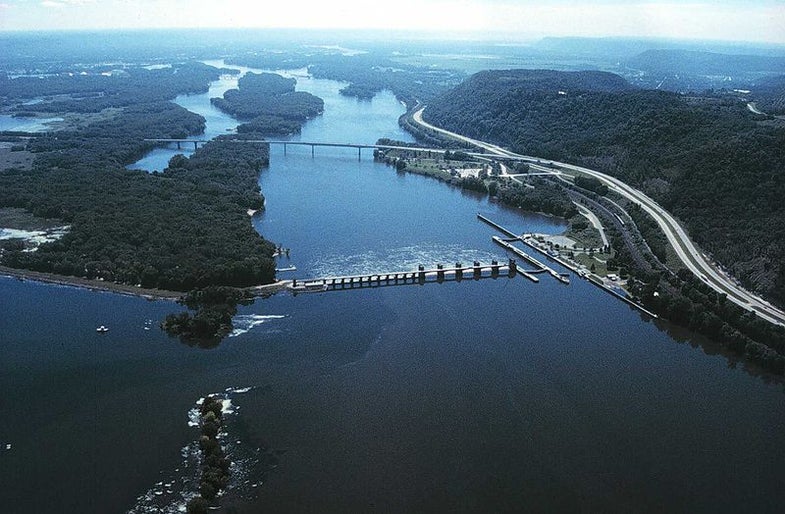 Rain or shine, the battle of the Mississippi rages on. The vital shipping lane that supports middle-American economies from the Upper-Midwest to New Orleans is once again in dire straits as the Army Corps of Engineers struggles to control Big Muddy–this time by making it deeper. Wracked by the worst (and longest) droughts in memory, the Midwest and the river are critically short on water, so short that the shallowest stretch of the river between Cairo, Ill. and St. Louis could become unnavigable in the next month, and the Corps of Engineers is just about out of geoengineering options to mitigate the problem, NPR reports.

The Army Corps of Engineers has been building and managing the complex and sprawling system of levees, locks, dikes and spillways along the length of the Mississippi River for decades now, bending the river–which periodically wants to change its course, top its banks, and otherwise be, you know, a natural flowing body of water–to its will. Meanwhile, human development along the river offers the Corps a smaller and smaller envelope in which to err.

Usually when the Corps of Engineers finds itself in a jam along the Mississippi the culprit is heavy rainfall and flooding, which test the strength of decades-old levees and dams designed to keep the river in (as they did as recently as 2011). But right now, the Corps is scrambling to deal with precisely the opposite–even after tapping reservoirs all along the Upper-Midwest, there’s simply not enough water to be had. With options dwindling, the Corps is once again trying to engineer its way around a natural calamity, calling into question whether or not our continued meddling with the natural flow of the Mississippi is simply digging us a bigger hole in the long run.

Right now, the Corps is quite literally digging a hole. Barges on the Mississippi in southern Illinois are heaving rocks out of the river in an attempt to dredge two more feet of depth through the shallowest stretch–enough to keep traffic flowing at least through the end of January. The good news for the Corps right now is that the Midwest has had some rain in recent weeks, and if it can get through this month the river should rise again (historically, the Mississippi’s water level bottoms out in January and begins rising again in February and through the spring). But past performance is not always an indicator of future results. If the river doesn’t begin rising again soon, the stretch between Cairo and St. Louis could become unnavigable for shipping vessels in the coming weeks, cutting off shipping in the Great Lakes region from the lower Mississippi River and its access to the shipping ports of New Orleans.

So the Corps of Engineers has to go on digging, dredging, and ultimately praying for rain–a reminder that our attempts a geoengineering have a come a long way, but that they currently can take us only so far.