The condition often kills patients within a few years. 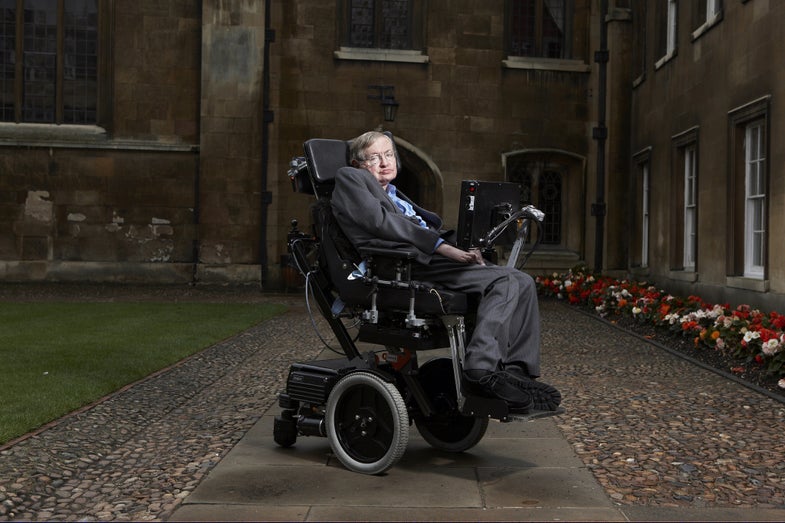 Stephen Hawking, who passed away at the age of 76 last week, was a world-renowned physicist. He will forever live inside our history books, synonymous with theories that helped us understand the universe’s beginnings and how black holes behave.

But Hawking is not only noteworthy for his prolific physics work: For over 50 years he lived with amyotrophic lateral sclerosis, or ALS. The disease (which in the U.K. is called motor neuron disease, and in the U.S. commonly referred to as Lou Gehrig’s disease) typically runs its fatal course more swiftly.

Because we use our muscles for walking, eating, speaking, and of course breathing, people with the disease often come to rely on wheelchairs, feeding tubes, and ventilators as their condition progresses. On average, a person newly diagnosed with ALS lives just two to three years.

But Stephen Hawking lived for 55 years following his diagnosis. What made him such an outlier?

Doctors and researchers can’t really know for sure. But they do know that the course of the disease is highly variable. According to Scientific American, researchers have also known for some time that there are actually multiple variations of the disease: Progressive muscular atrophy primarily affects the lower motor neurons, primary lateral sclerosis affects the upper ones, and progressive baldor palsy affects the face, tongue, and muscles we use to swallow. (Though all of them do, in the end, tend to affect every motor neuron to varying degrees.)

Most people with ALS eventually succumb to respiratory failure or dehydration and malnutrition—often a result of weakening and deterioration of those particular muscle groups. A feeding or respiratory tube can prolong life when the disease strikes these vital muscles, but that equipment is expensive, and requires round-the-clock maintenance and care. Hawking was fortunate enough to have access to this medical support, which helped him survive.

Hawking was also diagnosed with the disease when he was just 21 years old, which is a good 20 or 30 years younger than is most typical. Researchers have found that people diagnosed in their teen years often live for decades. This variation of the disease, which is known as juvenile-onset ALS, usually progresses at a slower pace; the deterioration of the nerves is not as rapid and doesn’t extend as far, especially with regard to the breathing and eating muscles.

The fact that Hawking’s mind remained sharp is another point of note, though a little less straightforward. Some people with ALS experience dementia, or at least have such difficulty interacting with the world around them as to limit their intellectual engagement. But thanks to a computer that allowed him to write a few words a minute using the movement of his cheek muscles, Hawking authored books and papers and gave countless lectures until shortly before his death. Whether or not this cognitive ability contributed to his longevity is unclear. There haven’t been any long term studies evaluating how cognition affects ALS. One study from 1999 found that people with frontal lobar dementia (which some estimate occurs in about 50 percent of people with ALS) had a slightly lower life expectancy (about 11 months) than those without.

The truth is, Stephen Hawking never knew how much longer he would have to live. He publicly noted on several occasions that this uncertainty gave him an added incentive and hurry to continue his life’s work. Perhaps one way to view Hawking’s life is as such: You never know how lucky or unlucky you will get. Hawking never knew how much time he had—but then again, none of us do. He will be remembered not just as a massively influential astrophysicist, but as a reminder to make the best of the time you’ve got. And for anyone grappling with a diagnosis of ALS or another potentially terminal illness, he will always offer hope of a long life, richly lived.