Found: Peptide In Humans’ Brains That Keeps Us Alert And Happy

A new study explores the relationship between narcolepsy and depression. 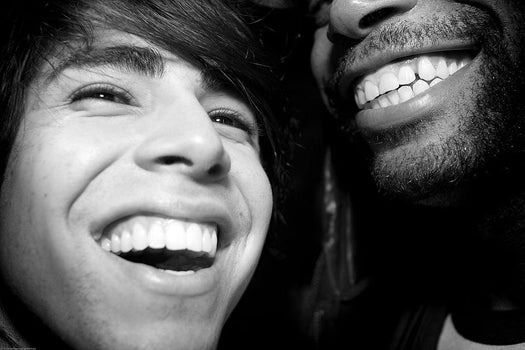 Everyone wants to figure out the the secret key to happiness. Maybe it’s power, or money, or a social thing. Or maybe it’s related to watching adorable chimps see the sky for the first time. Or, like most things, it could just be in your head.

This has implications for both depression treatment and the study of narcolepsy, as the sleep disorder and depression often go hand in hand. The study, from last week’s Nature Communications, looked at the release of two peptides (chemical compounds with two or more bonded amino acids) in the brain — MCH, or melanin-concentrating hormone, and hypocretin. Hypocretin levels increase when we’re waking up, while MCH levels increase during the onset of sleep.

To examine the relationship between hypocretin, depression and narcolepsy, researchers followed eight epileptic hospital patients whose brains were already being monitored by implanted electrodes. They measured the release of hypocretin and MCH while the patients watched TV, talked to hospital staff and their families, underwent clinical testing and slept. The patients rated their moods every hour in a questionnaire.

Some drug companies are working on using hypocretin antagonists in sleeping pills, but this study suggests that that would affect people’s moods as well. Along with previous research, the results “suggest that hypocretin administration will elevate both mood and alertness in humans,” according to senior author Jerome Siegel, a UCLA psychiatry professor who studies sleep.