A new "consensus statement" on sports concussions deals with protective equipment and sports rules, among other things. 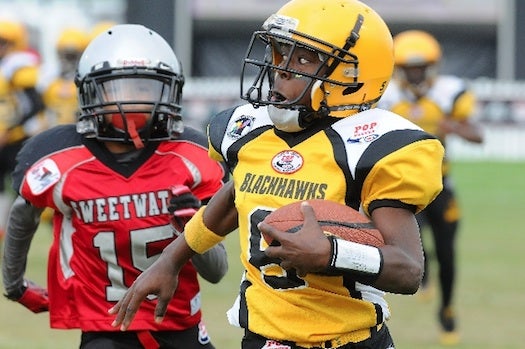 Kids play football at a White House-sponsored event. Helmets and mouth guards are important for protecting against some injuries, but don't prevent concussions, a new consensus document found.
SHARE

Existing helmets and mouthguards protect athletes’ teeth and faces, but not their brains, according to a new international document.

That’s one of several findings from the latest “Consensus Statement on Concussion in Sport,” which was signed off by several major international sports organizations, as well as researchers from Australia, North America and Europe. Meant to summarize doctors’ most up-to-date knowledge about concussions, the consensus statements—this is the fourth one since 2001—have guidelines for everybody from peewee players to weekend warriors to professional athletes.

There’s no good clinical evidence that helmets and mouthguards prevent concussions, the consensus group, which gathered in Switzerland last November, found. Studies do show that the equipment protects from facial and head injuries, such as skull fractures, but players should be careful not to play more dangerously because they believe they’re being protected from concussions, the group says.

Some sports should consider changing rules when there’s clear-cut evidence that something in the sport causes many concussions, the statement says. The document offers soccer as an example, where arm-to-head contact accounts for half of concussions.

Any player diagnosed with a concussion shouldn’t return to the field to play for the rest of the day, the statement recommends.

In general, these consensus statements are aimed doctors and other health professionals who may check up on athletes during or after games. This time, however, the authors also developed a guide for parents, coaches and other non-professionals to help them determine when a player should see a doctor.

“It’s really important to recognize injury that might have occurred,” Willem Meeuwisse, one of the document’s authors and a physician specializing in sports at the Hotchkiss Brain Institute in Canada, tells Popular Science. “That’s why we made this pocket guide.”

The International Olympic Committee, FIFA, the International Equestrian Federation and the International Rugby Board all officially back the current Consensus Statement on Concussion on Sport. Those organizations underwrote the costs of bringing international scientists together for a conference in Switzerland last November to write the statement. They had no hand in policy, Meeuwisse says.

The NFL has not officially backed the statement, but Meeuwisse says he wouldn’t yet expect it to, as the statement has just been published. In previous years, international sports organizations have taken the consensus statements and adapted them to the sports they specifically govern. Meeuwisse guesses that adoption process can take a year or two.

The British Journal of Sports Medicine is publishing the new consensus statement in its April issue. The statement is also available for free online.