They left whales in the evolutionary dust. 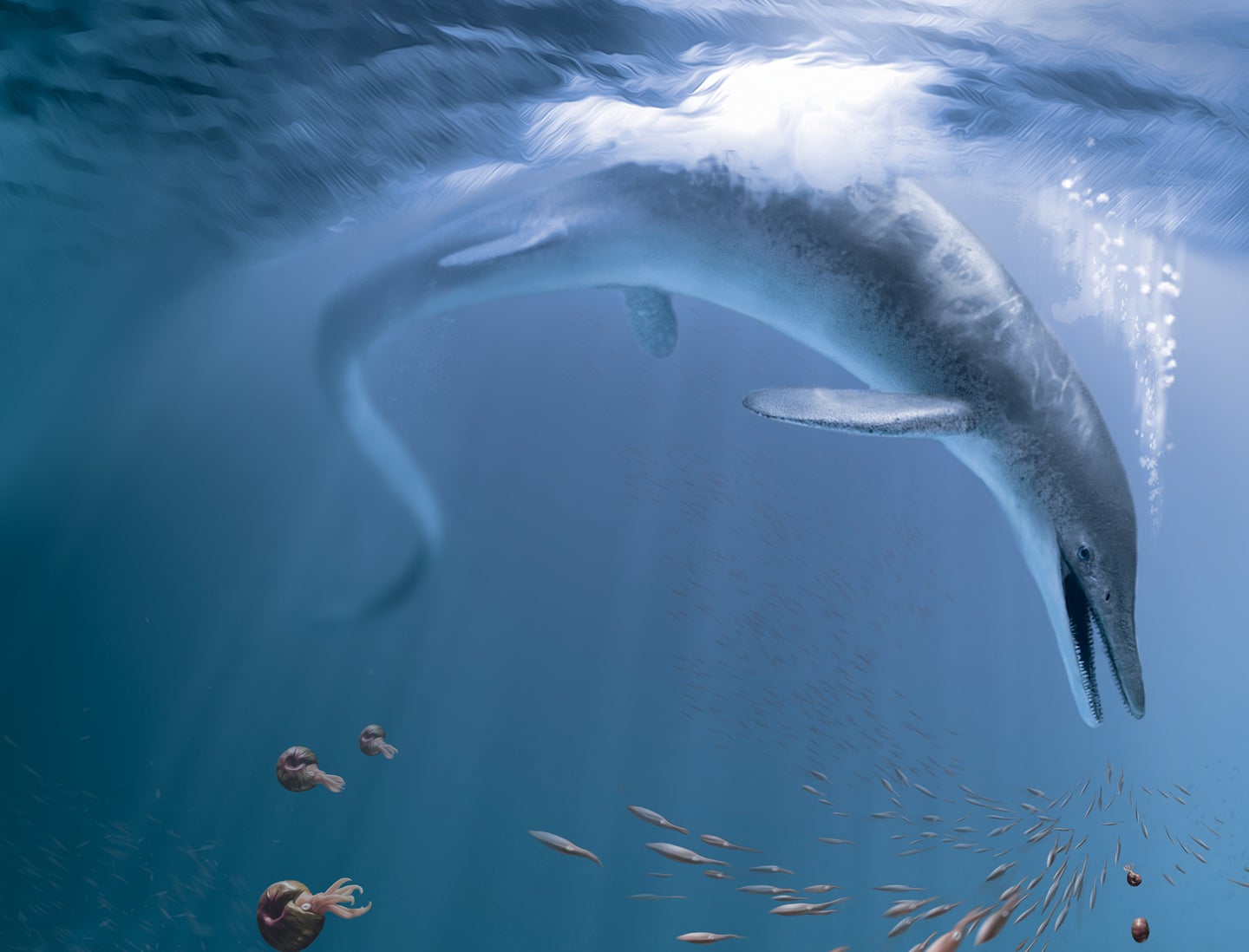 A life recreation of C. youngorum stalking the Nevadan oceans of the Late Triassic 246 million years ago. Stephanie Abramowicz, courtesy of the Natural History Museum of Los Angeles County
SHARE

About 246 million years ago, a marine reptile roughly the length of a humpback whale patrolled the seas over present-day Nevada.

This ichthyosaur wasn’t just remarkable because of its massive size, according to scientists who recently analyzed a partial skeleton recovered from the Augusta Mountains. The new species notably lived just a few million years after the very first ichthyosaurs—which were roughly dog-sized—appeared in the fossil record. This means these swimmers supersized themselves much more quickly than whales did, according to research reported on December 24 in Science.

“​​This fossil combined with the [other] fauna that we’re finding in Nevada is a true testament to how resilient life is, and how fast evolution can proceed if the environmental conditions are right and the opportunity is there,” says study coauthor Lars Schmitz, a paleontologist at the W.M. Keck Science Department of Claremont McKenna, Scripps, and Pitzer Colleges. “Even after a massive extinction event where the entire world is in turmoil, life can diversify really, really fast.”

Ichthyosaurs first arose 249 million years ago and hunted the world’s oceans for the next 150 million years before going extinct. Their streamlined bodies, flippers, and large eyes gave them a slightly dolphin-like appearance, Schmitz says. Indeed, ichthyosaurs shared a few similarities with cetaceans—whales, dolphins, and porpoises. Both groups evolved from land-dwelling animals that returned to the sea, developed similar body plans including powerful tails to propel themselves through the water, and in some cases grew to enormous sizes.

The ichthyosaur fossil that Schmitz and his colleagues analyzed includes a skull more than 6 feet long, as well as parts of the right arm, spine, and shoulders. The new species, which they named Cymbospondyus youngorum, had a long snout filled with pointed teeth and a slender body.

Based on the size of its skull, the researchers estimated that C. youngorum would have reached roughly 58 feet long and weighed just under 50 tons. “This one is much larger than all the other ichthyosaurs that lived earlier and at the same time, so [it’s] essentially the first giant in the oceans,” Schmitz says.

The remains of several other large ichthyosaurs around 33 feet in length have also been discovered near the C. youngorum specimen, he adds. Bulking up likely came with several advantages; in the oceans, larger animals tend to be efficient hunters, are protected from other predators, and can more easily regulate their body temperature.

The researchers compared C. youngorum to other ichthyosaurs of varying ages and anatomical traits, and identified two “pulses” of rapid growth early in the group’s evolutionary history. “It really helped us to understand that body size for ichthyosaurs evolved super fast,” Schmitz says.”

[Related: This ancient millipede was as big as a car]

“Ichthyosaurs hands-down win in terms of getting to that size so early,” says Benjamin Moon, a paleontologist at the University of Bristol in England who has also studied ichthyosaur evolution.

C. youngorum and its neighbors are all the more striking because they arrived on the scene not long after a mass extinction—one that wiped out 81 percent of all marine species around 252 million years ago. Many of the phytoplankton and algae that fuel today’s marine food chains had yet to evolve, raising the question of how the ecosystem supported such large predators.

To find out, the researchers surveyed the wealth of known fossils from C. youngorum’s Triassic ecosystem, including smaller ichthyosaurs, fish, and squid-like ammonites. The team used a computer model to investigate whether there would be enough energy to sustain C. youngorum, assuming the fossils added up to a representative picture of the ancient food chain.

Somewhat surprisingly, Schmitz says, the researchers found that the ecosystem preserved in the fossil record was “stable and well functioning” enough to support a large number of beefy marine reptiles. One clue may lie in the fact that there aren’t many fish fossils in the area. “We’re cutting out several steps in that food chain, so [there’s] more direct transfer of energy up to the top levels,” Schmitz says.

The next step, he says, will be for researchers to explore whether body size has changed over time in similar ways among other groups of extinct and living animals that have returned to the water, including plesiosaurs and turtles.

“It’s very neat, what they’ve done with trying to reconstruct this ecosystem,” Moon says. “That’s interesting from the point of view of saying that there’s enough food there to support these animals getting big and having diversity.”

Another question for future exploration is the extent to which other variables such as temperature might also have influenced the ichthyosaurs’ growth spurt, they say.