Nazi-Bred Cows Are Too Ferocious To Farm 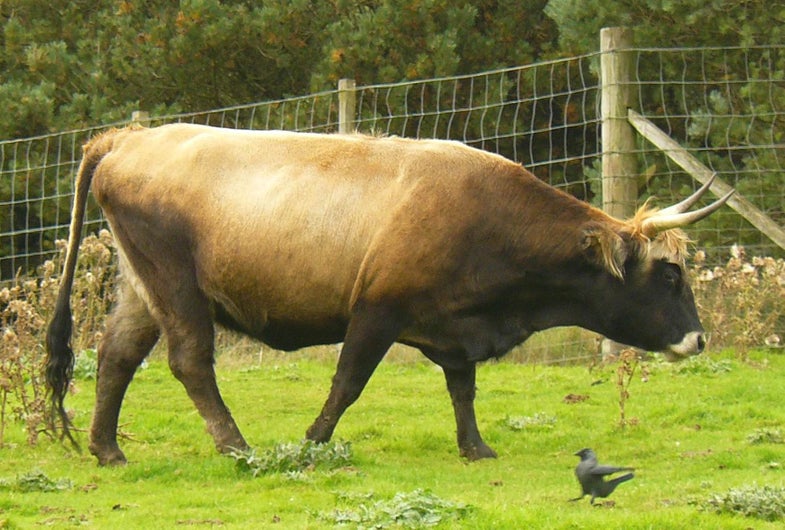 In the 1920s and 30s, the Nazis tried to resurrect cows’ wild ancestor, the aurochs, for hunting purposes. By crossing the various cow breeds that descended from the aurochs, German scientists hoped to create a beast that was similar in shape and ferocity to the original aurochs. The result was the Heck breed, which is physically not all that similar to its ancient ancestor—the cows are smaller and beefier—but they do appear to have inherited the aurochs’ bad temper. A herd of the beasts in the U.K. has now proven unmanageable.

Farmer Derek Gow imported 13 Heck cows to the U.K. in 2009, intending to raise a small herd to graze on conservation lands. Unfortunately, as the Guardian reports, Gow has now had to cull his herd of 20 Heck cows down to six after many of the cattle began, well, raising heck.

The aurochs went extinct in the 1600s due to disease, habitat loss, and hunting. Some conservationists hope to one day bring back the aurochs by breeding many different types of cows together. (Sound familiar?) The idea is that different breeds inherited different traits from the aurochs; by crossing those breeds with each other, researchers might be able to put those traits back together into a beast that’s genetically, physically, and behaviorally similar to the aurochs. The idea is one of several controversial “de-extinction” experiments researchers have proposed.

Let’s just hope that, if the project ever grows hooves, the scientists keep those diabolical cows away from small children.