How Well Does Scotch Age in Zero Gravity? A Distiller Launches Some to Find Out

Ardbeg, makers of extremely peaty Scotch whisky, has launched samples of its product into space. Not as a gift from... 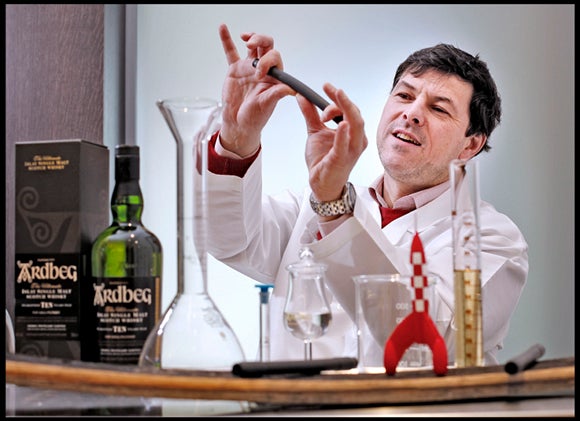 Ardbeg, makers of extremely peaty Scotch whisky, has launched samples of its product into space. Not as a gift from Earth to extraterrestrial races, nor even as a refreshment for human astronauts — no, the idea is to study how whisky ages in zero-gravity conditions.

Scotch gets a lot of its flavor, and all of its color, from aging in oak barrels for decades on end. Precisely what happens in those barrels, on a chemical level, is a very complex and not-entirely-understood process. There’s been a lot of analytical science devoted to it, and efforts to get the benefits of aging much faster — but this is the first time to my knowledge that it’s been aged in space.

The whisky was given room by a company called NanoRacks on a cargo ship that launched in October, but Ardbeg kept the experiment under wraps until head distiller Bill Lumsden announced it today, at the Edinburgh International Science Festival. NanoRacks, which is in the business of providing space for experiments on the International Space Station, launched a sample of unaged whisky mixed with charred oak and will compare the space-aged whisky with control samples aged on Earth for the same two-year period.

The Register quotes Michael Johnson of NanoRacks as saying, “By doing this microgravity experiment on the interaction of terpenes and other molecules with the wood samples provided by Ardbeg, we will learn much about flavours, even extending to applications like food and perfume.”

Personally, I’m a little dubious as to whether gravity or its absence has much effect at all on the aging of whisky and its flavor molecules — sending Scotch into space seems faintly gimmicky, especially since it is rather unlikely that orbiting whisky will turn out to be an easier, cheaper, better way to make great liquor than the traditional Earthbound method. I asked Ty Tyler, liquor scientist, whether he agreed.

I, too, look forward to tasting the Ardbeg before pronouncing judgment.