The company is worried about future shortages of a petroleum by-product that's a major ingredient in modern rubber tires. 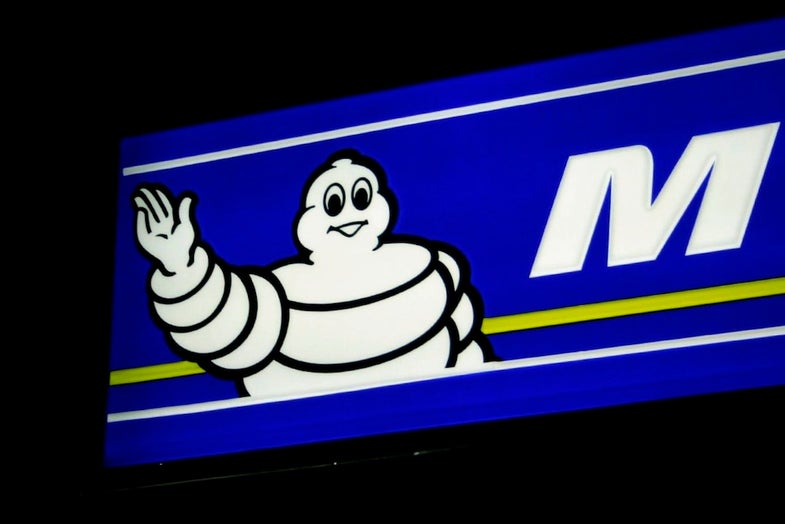 The Michelin Man’s familiar rolls may get a material makeover in the next decade. French tire company Michelin, supported by a subsidy from France’s Environment and Energy Management Agency, will spend $71 million (52 million euros) over the next eight years researching whether it’s feasible to make tires in part from plant-based materials, the U.K.’s The Guardian reports. Tires are normally made with a combination of natural rubber from rubber trees and synthetic rubber made from petroleum by-products.

The company and other tire and chemical companies are worried about rising prices for their favorite petroleum by-product, butadiene, The Guardian reports. Increased interest in shale gas is behind the expected butadiene shortage, as energy companies shift focus from oil to gas.

Tire companies have also sought to replace the some of the oil that goes into tires with plant-based alternatives, to improve the tires’ performance. Japanese tire company Yokohama has replaced a small percentage of the oil that goes in its tires with orange oil and Goodyear announced last year it’s researching soybean oil for tires. Such alternatives aren’t necessarily better for the environment than regular oil, however. For example, Yokohama “has no idea” whether its orange-oil supplier is particularly environmentally friendly, Popular Mechanics reported in 2012. The oil replacement was about performance, not about the state of the Earth.