Documenting The Lives Of Tigers

A new book offers an intimate look at the endangered cat. 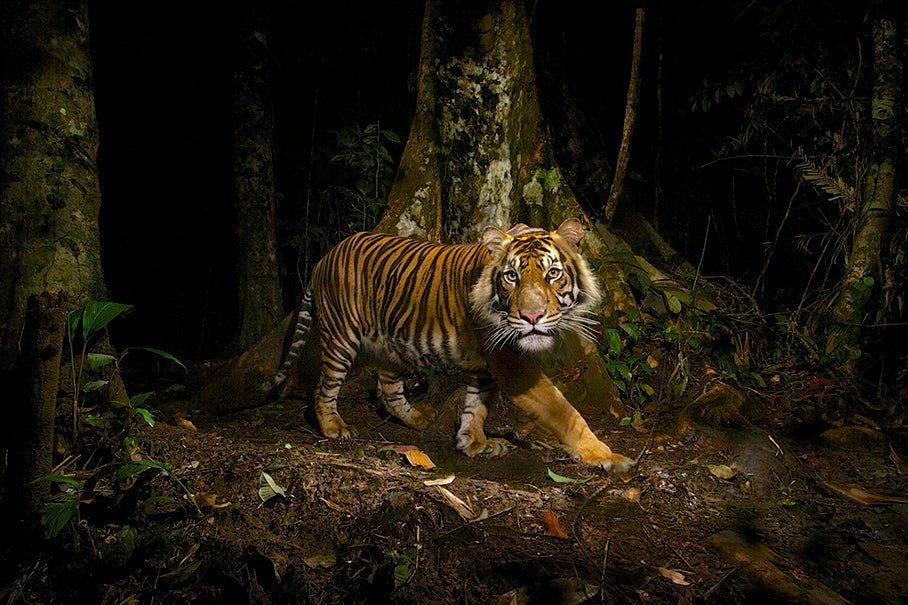 This fall, National Geographic award-winning photographer Steve Winter published a book with Sharon Guynup called Tigers Forever. The images and stories that comprise the book come from three different National Geographic stories Winter worked on, and more than 60 interviews conducted by Guynup. Guynup accompanied Winter in the field for a few locations, but also wrote based on details from her own experiences studying tigers, as well as daily rundowns from Winter via satellite phone.

Winter captured these intimate images of tigers using camera traps—a method he developed when he was photographing snow leopards years ago. He thought, “how do you do a story about an animal that you’re never going to see.” The answer was the camera trap, which he has been modifying over the years with National Geographic. 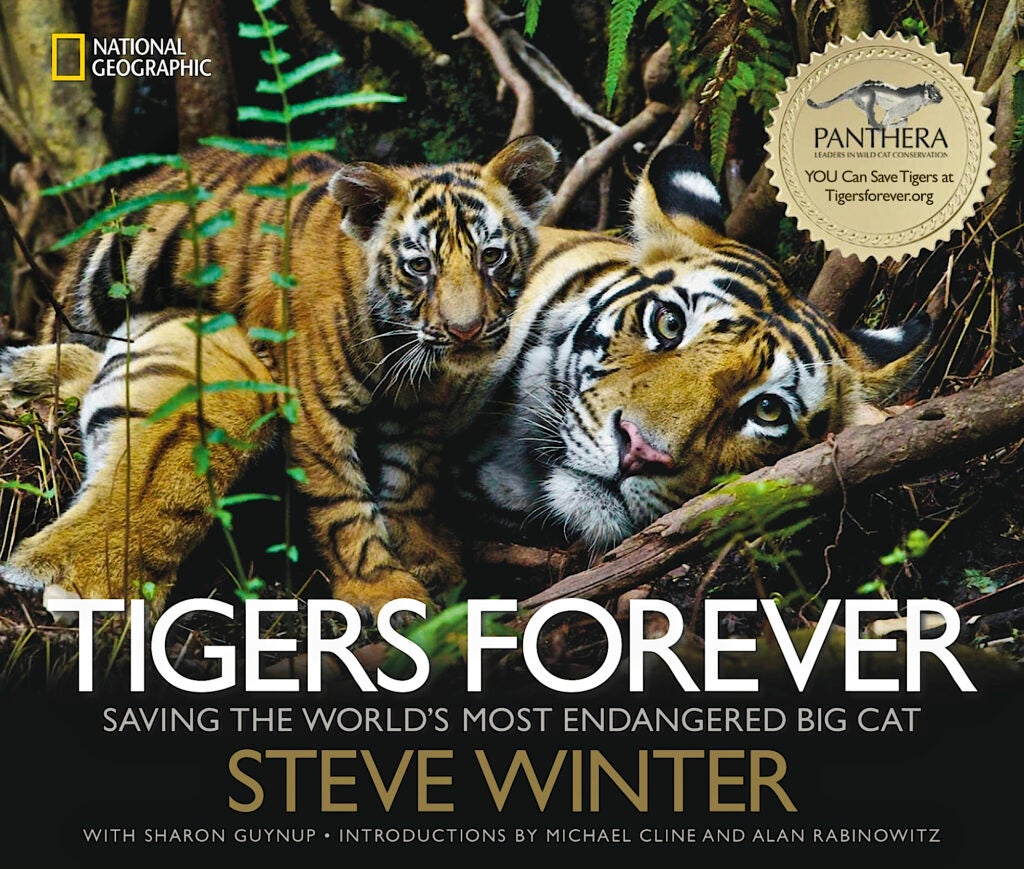 Before the tiger wanders into the infrared trigger’s domain, Winter spends time setting the scene with lights to mimic beams of sunlight—many of the animals he photographs are most active at dawn and dusk. Some tigers aren’t always pleased by the intrusion. One tiger, which Winter dubbed Smasher, grew very adept at crushing a camera trap and pulling out its cords until it stopped flashing and making sound.

Winter began his career as a photojournalist. When he began photographing wildlife, he realized that making nice animal portraits was doing a disservice. Portraits fail to show the animals’ full stories. Since then, he’s been trying to capture the full breadth of the threats, problems, and solutions that surround tigers and other wild animals. There are only 3,200 wild tigers out there now, and with the forces working against them (poaching, habitat encroachment, and more) the book could leave readers feeling as though the situation is quite dire.

But Winter and Guynup are optimistic. Ttigers are a productive species—females can give birth to 15 cubs over their lifetimes, and given a safe place to hunt and access to food, they have the opportunity to thrive.

“In many circumstances, conservation is like fighting a war,” Guynup says. “And it’s our job as journalists to tell the story.” 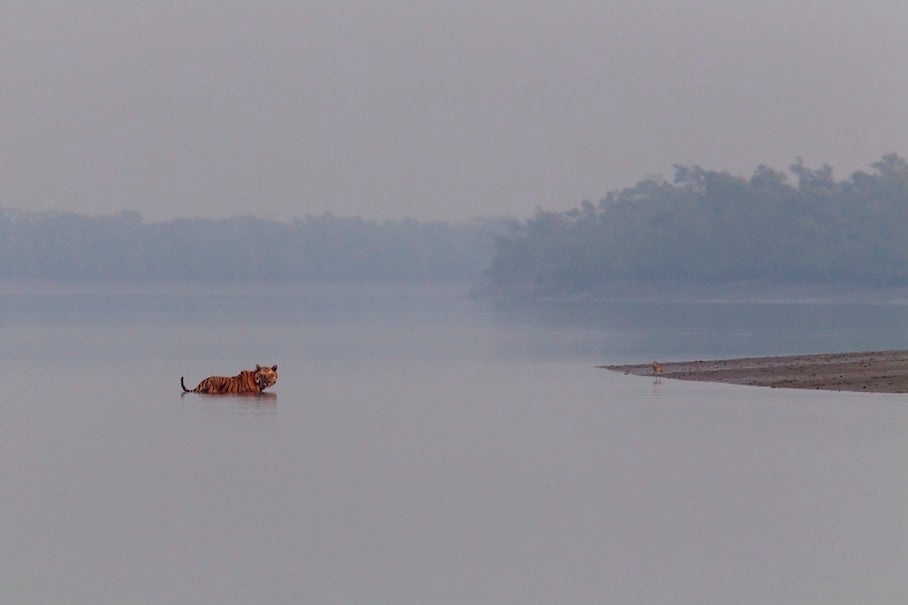 In Tigers Forever, Winter covers a lot of ground. The book takes readers from Myanmar to India to Sumatra and Thailand. In this photo, a male tiger crosses the Bay of Bengal channel in India. 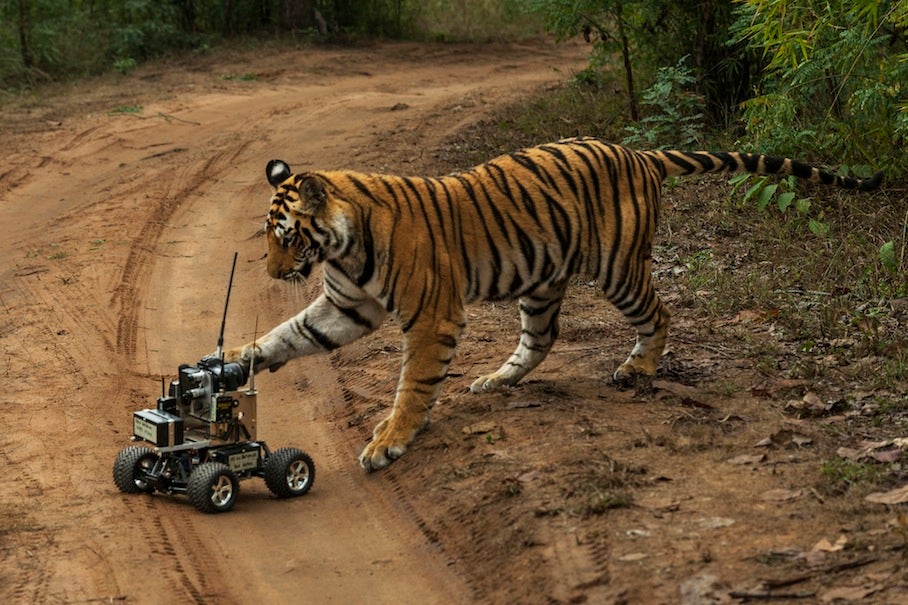 A tiger cub plays with a “camera car.” The car was built by National Geographic’s photo engineering department. The male cub stalked and then swatted the contraption. 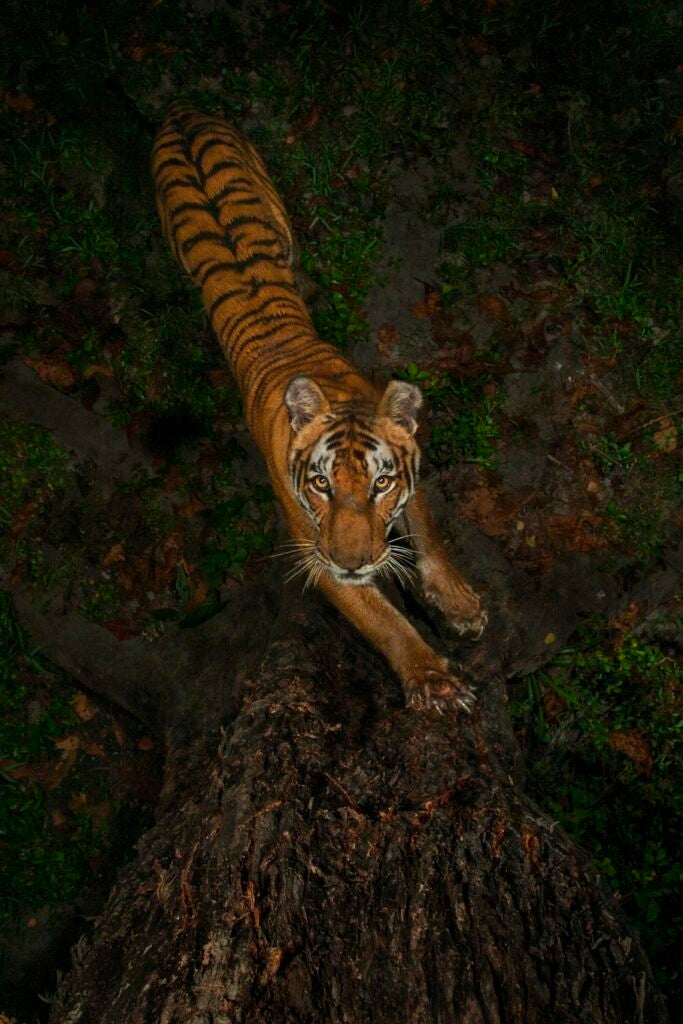 Tigers, like house cats, mark their territory by scratching trees. This tiger was caught in the act by a camera mounted on the tree, 15 feet above the ground. 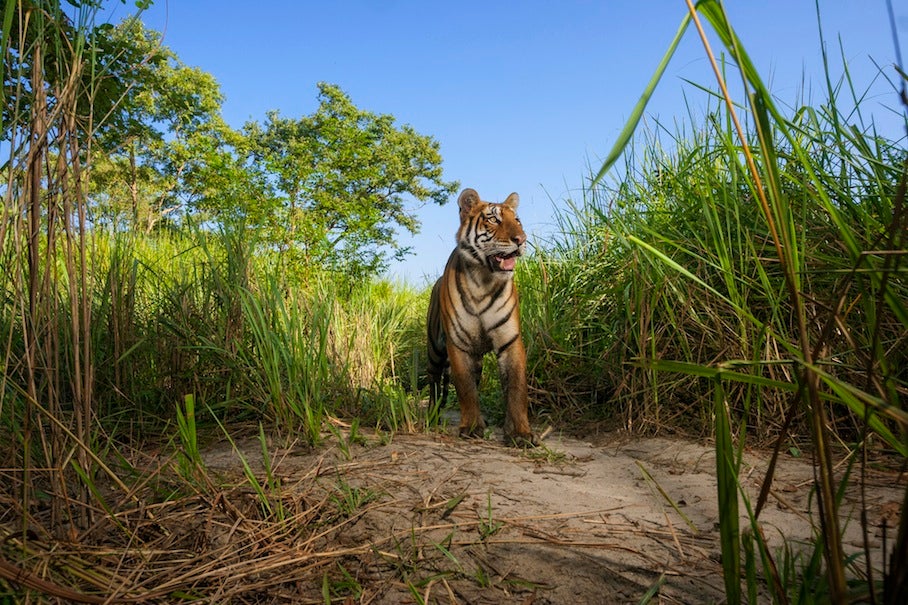 The flash caused this cub to look from side to side as the camera fired. 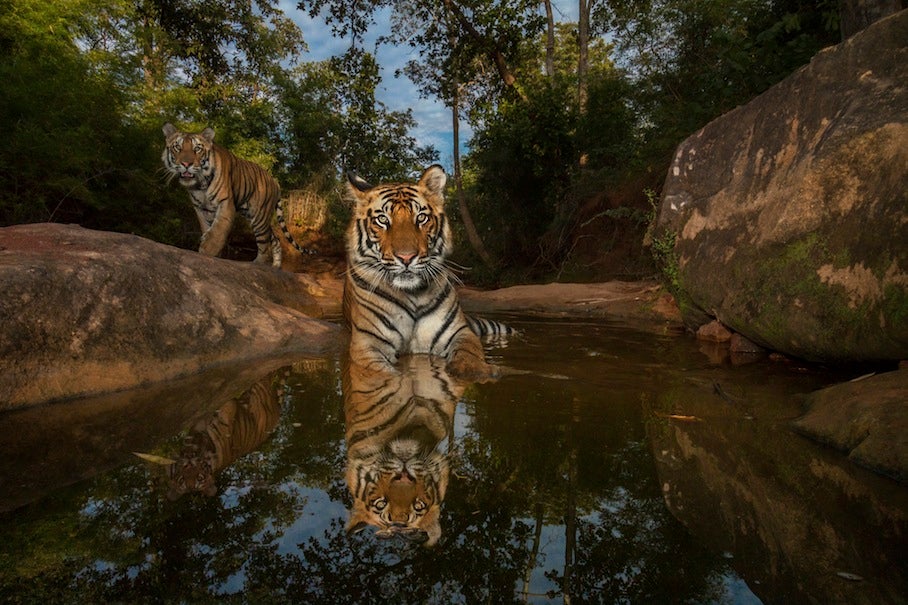 These 14-month-old cubs cool off in Bandhavgarh National Park in India. 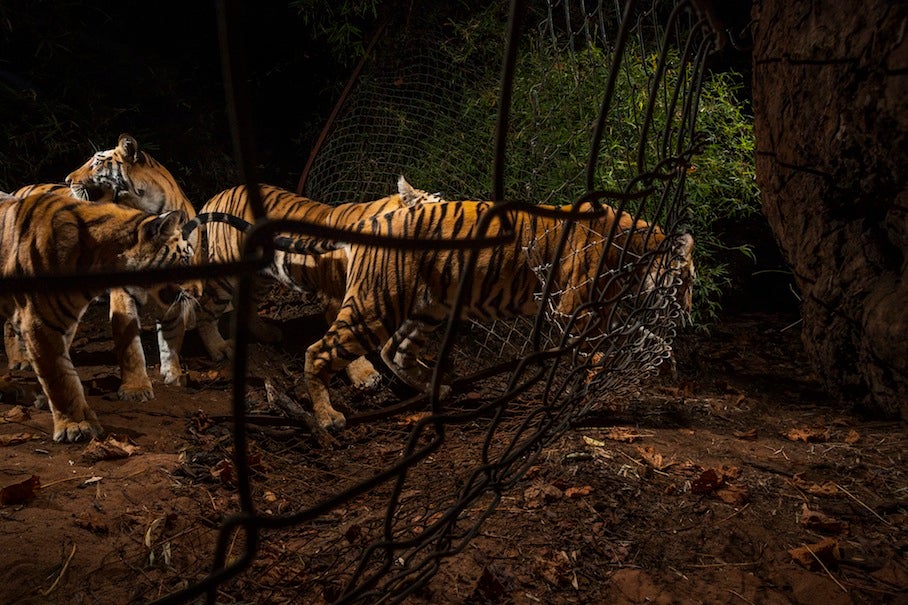 This mother and her cubs leave the national park through a broken fence. The tigers frequently stray from the park and into human settlements nearby. 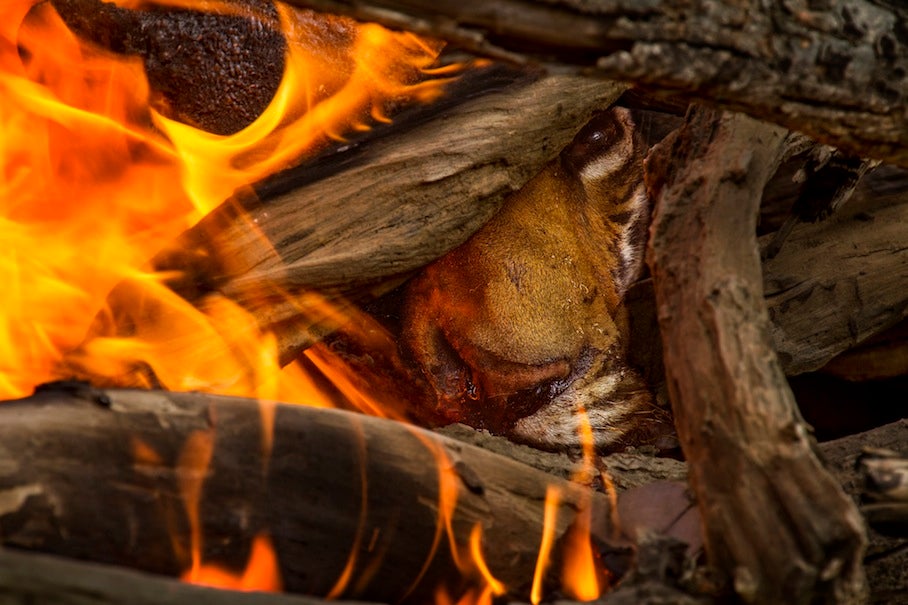 This female got into a fatal fight with another tigress. Shrinking habitats means tigers are forced to encroach on others’ territories. Park guards cremated this tiger to keep her body from entering the illegal traditional medicine trade. 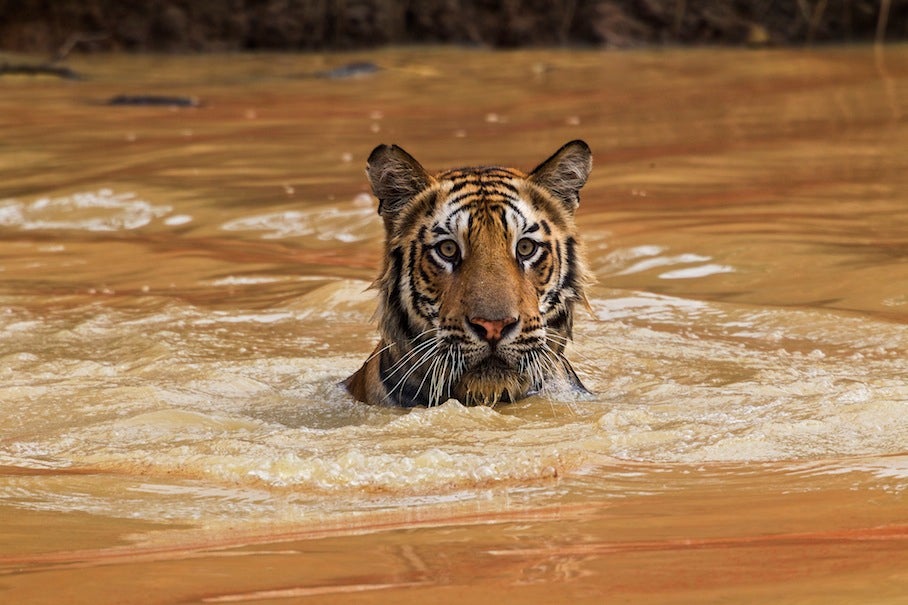 This cub also spent some time cooling off the in water. The intense look on his face is caused by a deer spotted on the shore—potential prey. 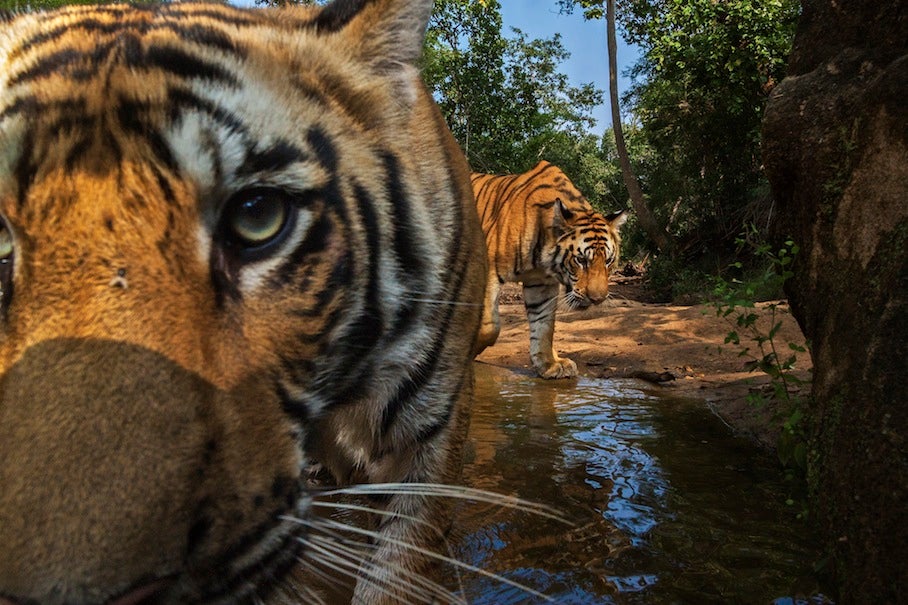 These cubs got a little too close to the equipment. The tiger, which Winter dubbed Smasher, did his best to destroy the camera trap. 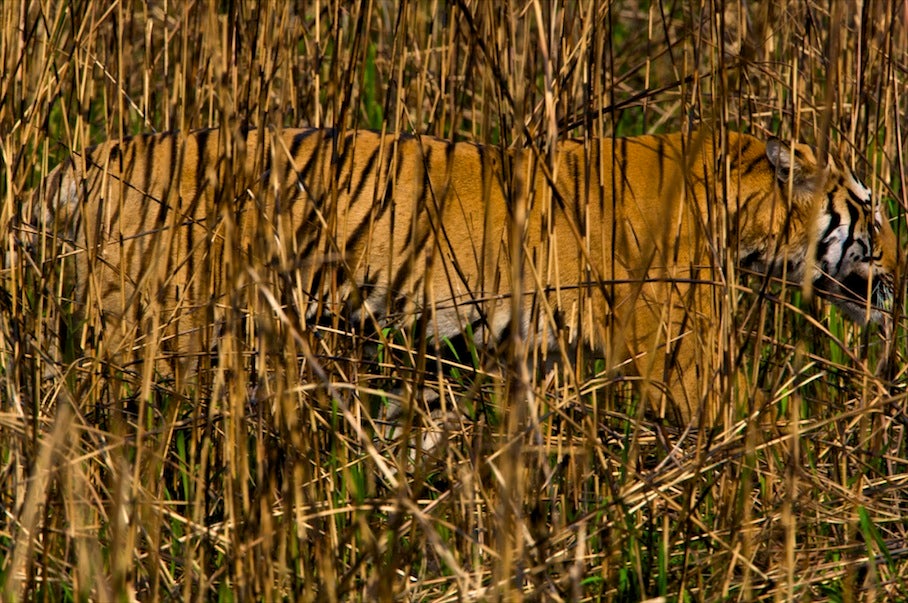