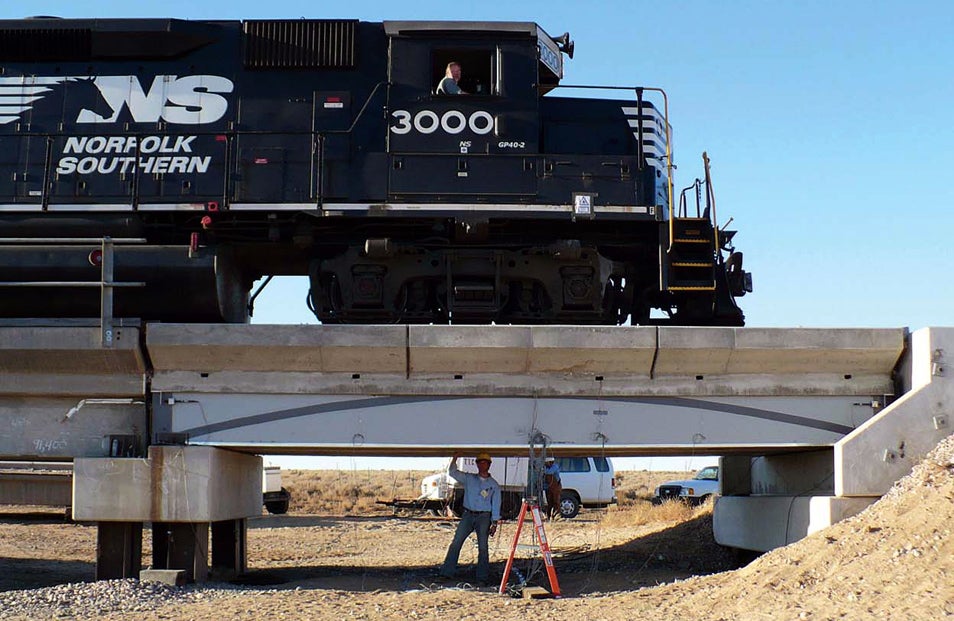 John Hillman stands under a test bridge made with his composite beams, which get their strength from a concrete arch inside.

Hillman Composite Beams
$500,000
Time: 12 years
Prototype | | | | | Product
Last November, John Hillman stood beneath a bridge built with prototype plastic-and-concrete beams of his own design. Then he signaled for his team to release a nine-million-pound coal train. “You can do all the calculations you want; you can do tons of lab testing. But at the end of the day, you run a heavy-axle coal train over the bridge, and that pretty much tells you whether or not it’s gonna hold,” Hillman says. It didn’t budge. 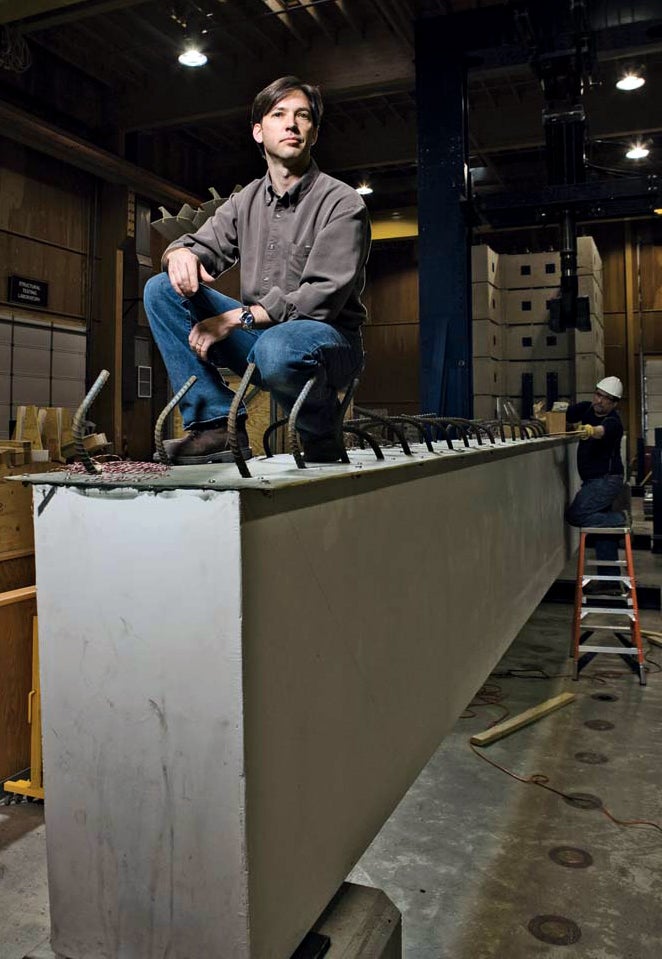 The rebar sticking out of Hillman’s beam is anchored in the concrete arch inside. It attaches the beam to the roadway slab above

In most concrete bridges, beams stretch between columns to support the roadway above and are made from poured concrete with steel rebar inside. But thousands of beams will soon need to be replaced as bridges are repaired and upgraded in the wake of the Minneapolis bridge collapse last summer. According to the Federal Highway Administration’s 2007 National Bridge Inventory, one in four bridges is either structurally inadequate or no longer meets current standards. The tab to upgrade them could exceed $200 billion. Hillman’s beam promises a cheaper, longer-lasting option for both repairs and new construction.

The concrete in a standard bridge beam absorbs vertical pressure, called compression, while the steel is tremendously resistant to tension, the force of the beams being stretched between columns. As a structural engineer, Hillman knew that arches are the ideal shape for resisting compression. So he figured he could create a stronger, lighter beam by simply casting the concrete in the shape of a four-inch-thick arch rather than a solid column. A strip of steel across the bottom of the arch absorbs tension, and a shell made from fiber-reinforced plastic and shaped like a traditional beam adds strength and corrosion-resistance.

In 2000, Hillman patented his idea and received a $340,000 federal grant to bring it to life. Along with $160,000 from composite and steel suppliers, he had enough to build a prototype. He approached Dennis Mertz, a bridge expert at the University of Delaware, who liked the idea so much that he offered Hillman access to the university’s manufacturing and test facilities. Then Hillman began the years-long process of testing steels and composites and perfecting the beam’s manufacturing.

The beam he’s created can handle 3.5 times its load limit before giving way (the standard target is around 2.5). And it weighs about 3,300 pounds before the concrete arch is poured onsite—a tenth the weight of a conventional beam, so it’s cheaper to ship. Even with the arch in place, it’s a third as heavy, so crews can install it with lighter-duty cranes. Hillman estimates that the beam could save 15 percent on the cost of a bridge.

Ian Friedland, the technical director of bridge and structure R&D for the Federal Highway Administration, acted as a sounding board for Hillman. “What he has done really pushed the envelope in a lot of areas,” Friedland says. “Finding the best way to use these materials, finding an efficient way to fabricate them, and then actually demonstrating the idea.

By the end of this year, drivers will be crossing two new bridges built with Hillman’s beams, a 58-foot span in Chicago and a 31-footer in New Jersey. Hillman will probably stand underneath that one as well, just to reassure himself. “Even to this day, I always have doubts that it works,” he says. “As a bridge designer, you’re not allowed even one failure.”