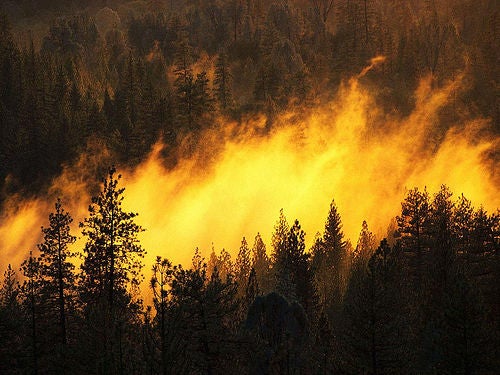 What exactly killed the dinosaurs? One of the most popular theories holds that the extinction event was driven by an asteroid collision. Evidence for the theory can be found in a thin layer of iridium in what’s known as the K-T boundary, a (similarly thin) layer of sediment in the ground which marks where the surface of the Earth was 65 million years ago. Iridium is common in asteroids and not common on Earth. Its presence in the sediment would indicate an impact and release of the material. What happened next is still a matter of debate.

Did the collision kick up a tremendous cloud of dust and debris which ultimately blocked out the sun? Or start a massive forest fire whose CO2 release literally cooked life to death? The latest hypothesis, according to a new paper in Geology, posits that the asteroid collided with Earth in the Gulf of Mexico, directly into a huge oil deposit. The fuel would have vaporized instantaneously, then caught fire in the atmosphere, sending a giant ball of flame around the planet.

The evidence for the theory comes from the discovery of microscopic spheres of carbon in the K-T boundary. These droplets, known as cenospheres, are found only when hydrocarbons like oil are burnt. The spheres appear in eight of the thirteen excavated sites cited in the paper, and only in the K-T boundary. Whether the fire was solely responsible for the extinction is difficult to say; it is likely that a combination of factors were in play. This new development, however, could prove to be a key component in the whole picture.