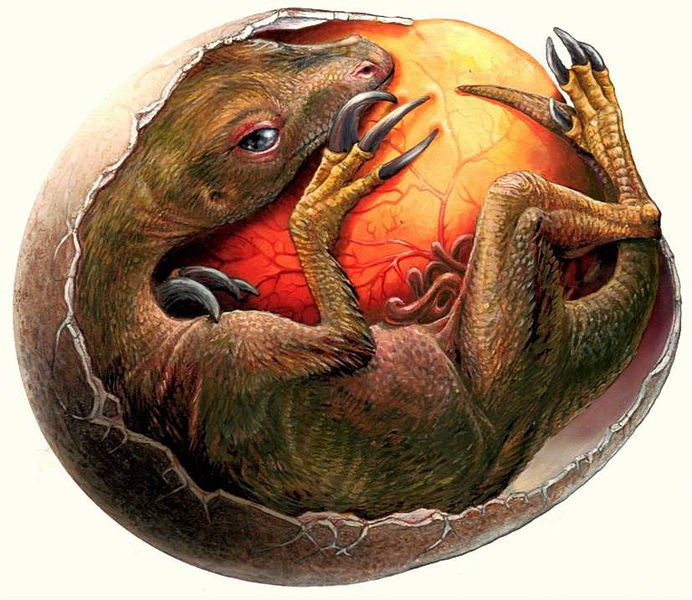 Paleontologists have excavated a plethora of feathered dinosaurs in China over the past few years have, but none of those dinosaurs had feathers like this. Scientists examining a news specimen of the dinosaur Beipiaosaurus have found imprints of a proto-feather that looks like the missing link between primitive downy feathers and the modern feathers seen on birds.

Additionally, Beipiaosaurus belongs to a recently discovered and poorly-understood group of dinosaurs called therizinosaurs. The specimen with the feathers is also the first Beipiaosaurus specimen found with a skull, which will provide important evidence about the relationship between therizinosaurs and other dinosaurs.

“Feathered dinosaurs are known by the bucket now from northern China,” said Mark Norell, Chairman and Curator of the Division of Paleontology at the American Museum of Natural History in New York, “but this is the first intermediary between feathers of Tyrannosaurs like Dilong and the feathers of more birdlike dinosaurs.”

The feather, described in a January 12th paper in the Proceedings of the National Academy of Sciences, consists of a ridged central shaft flanked by tufts of feather. Simple downy feathers consist of just the tufts, while modern feathers sport far more complexity with hard branches shooting off from the central shaft.

Julia Clarke, a paleontologist at the University of Texas at Austin who specializes in the evolution of birds, called the feathers “interesting” and “striking”, saying “The new specimen provides further evidence of these filament-like feather precursors in non-avian theropods that we predicted from evidence from how feathers develop in living birds.”

Thomas Holtz, Director of the Earth, Life and Time Program in the Department of Geology at the University of Maryland, speculated that the feathers could have been used for display, to keep the dinosaur warm or to help keep the dinosaur’s eggs warm while brooding. However, Holtz added that the skull of the specimen interested him far more than the feather.

Norell echoed that sentiment, mentioning that therizinosaurs continue to vex paleontologists with their weird bodies. Therizinosaurs are related to meat eating dinosaurs like Tyrannosaurus rex and Velociraptor, but are themselves herbivorous. Additionally, therizinosaurs have highly specialized hands and feet, both with giant claws similar to a tree sloth. Because of that radical body form, paleontologists have had a hard time figuring out where to place therizinosaurs in the evolutionary tree. Holtz and Norell both mentioned that this new specimen, with its intact skull, might help fix some of that confusion.

And while the place of therizinosaurs will continue to be debated in paleontological circles, it seems that the debate over the evolution of bird feathers can be put to rest.

Said Norell, “It is what we expected, but it’s always good to find things that confirm that what you were doing was right.”