Is this the future of air combat?

A revolution is under way in aerial combat. Tomorrow's fighter pilots may be ceding the skies to robots 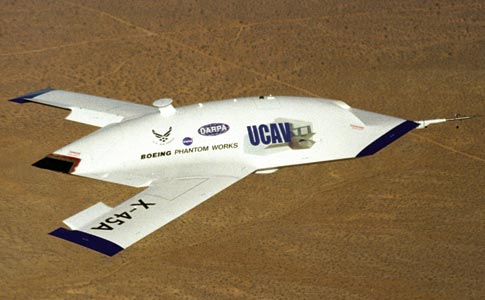 X-45A prototypes snap smartly onto the runway centerline after attacks on simulated mobile missile launchers. Although the two programs are not yet competing for dollars, they are certainly jockeying for position as military planners grapple with the ever changing nature of armed conflict. If recent wars in Bosnia, Iraq and Afghanistan–all bombing-intensive campaigns that saw minimal air combat–are any indication of what the future holds, then powerhouses like the F/A-22 will see little of the type of action they excel at, their highly trained pilots never engaging in tricky close-range combat. Rather, less expensive vehicles that can loiter above battlefields for hours, armed with a menu of instantly deployable bombs, will serve commanders much more effectively.

On the other hand, if future adversaries include the likes of China or some remnant of the former Soviet Union–countries with potential access to modern fighter jets–the UCAVs will have to prove their effectiveness against these sophisticated weapons. Robotic fighters still have a long way to go. After all, designers have only a few years’ experience with their more basic predecessors, unmanned aerial vehicles such as the remotely controlled Predator and the fully autonomous Global Hawk, which focus on the far simpler tasks of surveillance and reconnaissance.

Still, autonomous robots such as the Stingrays are beginning to proliferate worldwide, like so many tiny furry mammals scampering among the clawed feet of the dinosaurs.

At Laage Air Base, just south of Germany’s chilly Baltic coast, the country’s first squadron of very F/A-22-like Eurofighter Typhoon jets is gearing up. This is the former East Germany, and the rows of bunkers that once housed its MiGs and Sukhois sit empty, their doors scabbed with rust, a vivid reminder that the airplanes the Raptor and Typhoon were designed to shoot down vanished years ago. Most of our current adversaries haven’t invested in fighters at all. Instead, they’ve bought surface-to-air missiles.

And therein lies the biggest challenge to face next-gen fighter jets in their quest to secure their future. Late last year, civilians in the office of Defense Secretary Donald Rumsfeld leaked a plan to slash Raptor production to 179 airplanes from 381–already a step down from the 750 the Air Force originally wanted. The problem, aside from the unexpectedly high cost of each aircraft and significant program delays, is that the Raptor, like Europe’s Typhoon, was conceived and designed back in the 1980s to defeat the thousands of missile-bristling supersonic fighters that the Soviet Union and its satellites held on hair-triggers. The program’s opponents argue that such a threat no longer exists, as the empty bunkers at Laage demonstrate.

USAF chief of staff Gen. John Jumper, leading efforts to save the airplane from more cuts, flew the F/A-22 in January and sings its praises: “The F/A-22, some say, is built to dogfight old Soviet-era airplanes,” the combative commander has said. “Well, yeah, it does that with one hand tied behind its back, but it also does a whole lot of other things. No one doubts that the Raptor would be utterly dominant in combat. The operational testing conducted last year included a series of mock combats with F-15s. “We never got close to them,” Lt. Col. Craig Fisher of the 64th Agressor Squadron said in a videotaped interview. “It was very much an unfair fight.” That, of course, was the idea. Stealth makes the Raptor hard to find, and the F/A-22 sees better than any predecessor. Its smoothly contoured nose contains “active, electronically scanned array” (AESA) radar: The radar beam is steered electronically, rather than by a moving antenna, so it shifts instantaneously from target to target-identifying the type of each aircraft along the way. A data link connects all the Raptors in a flight, so every airplane can see what every other airplane sees. A Raptor pilot can have missiles launched before the opposing pilot has a clue what is happening.

But even in air-to-air combat, technological and tactical changes may have already made the tremendous acceleration and agility of the F/A-22 and the Typhoon less important. The nature of air war has changed, and close-range visual combat might never happen again. The proliferation of new, incredibly agile short-range missiles now makes visual-range combat extremely dangerous, and long-range air-to-air missiles have improved significantly, allowing slower fighters to more easily shoot down opponents. As a result of these factors, fighters in recent conflicts have mostly dropped bombs in support of forces on the ground. This is why the F/A-22´s cousin, the F-35 Joint Strike Fighter, which specializes in ground-target attack, sailed through Rumsfeld´s review. But the F-35 won´t be much of a pilot´s airplane. It doesn´t fly as fast or as high as the F/A-22. Like most stealth airplanes, it has a smaller radar image from the nose and tail than it does from the side, which makes it crucial to steer the airplane so that it presents its least visible aspects to hostile radars. This is done by computer, so for almost all of the time the airplane is over hostile territory, it will be on autopilot. Yet despite the F-35´s supposedly costing half as much as the Raptor, it is a year and a half late and $7.5 billion over budget, raising concerns that it will be just another capable but expensive manned fighter.

Meanwhile, Jumper and other Air Force leaders have pushed the Raptor not only as a fighter but as an invulnerable precision bomber that could knock out missile sites, “kicking the door down” for slower B-2 bombers and F-35s. But although Jumper “shot down” a lot of junior officers in F-15s, nobody knows whether even he can win this fight. The bottom line is that the F/A-22 was designed for air combat, and there are less expensive airplanes that can drop bombs. And soon there will be planes that can do it automatically.

For now, the UCAVs have yet to perform some very basic tasks, such as plugging into a fueling tanker in flight, sharing airspace with other military and civilian airplanes, or landing on an aircraft carrier. Until they do, the big money in the U.S. and elsewhere will remain budgeted for manned fighters, and there´s no doubt that thousands more will be built.

But it may not be long before UCAVs overcome their limitations. In early February, the Boeing pair took off from Edwards, circled over the Mojave Desert, automatically attacked a simulated missile site, and returned to their orbits. Minutes later a second missile site, unknown to the UCAVs´ computers, advertised its presence by sending simulated radar signals, and the UCAVs attacked it, too. The ground-based operator´s only job was to OK the release of weapons.

Much more testing is needed-testing that will involve half a dozen much larger prototypes, due to start flying in early 2007. Next up are three Boeing X-45Cs and Northrop Grumman´s X-47B prototypes, all being developed as part of a $4-billion program launched last year by the Defense Advanced Research Projects Agency (DARPA). The X-45C and X-47B are much bigger, to accommodate more fuel and weapons, than the four-ton X-45A. This is because DARPA program manager Michael Francis and other researchers believe that they have identified both an important advantage of the UCAV-its endurance isn´t limited by the pilot-and a mission that it can perform better than any current fighter. Northrop Grumman´s UCAV manager, Scott Winship, calls it “the supergap”: the ability to loiter for hours inside enemy territory and attack moving targets, such as missile launchers. “They can get in close and hit anything, up to 1,000 miles deep,” Winship says. “It´s something we can´t go after today.”

But if the UCAV is going to unleash deadly force, will it do so automatically? That´s an idea that makes people uneasy, especially when civilians are at risk. If it needs to “ask” a human operator for permission to launch a weapon, however, the response may come too late-a fast-moving fighter jet can vanish in seconds. And Jumper has raised concerns that the UCAV might not be able to survive in combat because, as currently conceived, it has no way to detect a fighter attack and won´t be agile or fast enough to evade it. One UCAV proponent inside the industry, who prefers not to be identified, interprets this position as a way for the Air Force to justify more F-22s, as top cover for the vulnerable UCAVs.

UCAV visionaries see these issues not as deal breakers but as challenges for the next few years. One of Francis´s goals is to create software that allows a group of UCAVs to intelligently, collectively attack a target or a threat-but never twice in the same way. In action, the UCAVs would rarely operate alone but as a wolfpack of four or more aircraft, collaborating to locate targets. Only one airplane in the group would use its radar at any time, making their signals very hard to track. The aircraft would defend one another with jamming and weapons. Winship suggests that one of the airplanes would carry a battery of air-to-air missiles and engage any fighter as soon as it got off the ground. (There may well be more than one type of UCAV. Winship sees everything from a 20-ton Naval version, the size of the X-47B, to a RoboBomber as big as a B-2 bomber, capable of flying 100-hour missions. To save money, they´d use common weapons, computers and radar.)

Ultimately, the answer to the UCAV-versus-fighter debate is that we don´t know the answer yet-partly because the promise of the UCAV technology has yet to be realized, and partly because it´s impossible to know how internal Air Force politics will play out. The same Rumsfeld memo that cut back the Raptor program also threw a major glitch into the UCAV: It will be taken from DARPA and given to the Air Force, where many suspect that the ruling elite of fighter pilots will throttle it, or at least suppress it until the Air Force has secured its fleet of F-35s and Raptors. “The fighter mafia that runs the Air Force has made several runs at the program to kill it,” says our unidentified source, who is close to the UCAV project.

Air Force leaders state in public that they support the UCAV, but in a form that doesn´t directly threaten the fighter. Says Jumper: “People ask me all the time, ´Do you guys feel your job is threatened?´ No. Because the things this is going to do are going to be things you can´t do in a conventional airplane.” Jumper and former Air Force Secretary James Roche raised the idea of a “flying Coke machine” UCAV that would orbit high above the battlefield with a variety of bombs and release them on command from ground observers.

Backers of autonomous combat aircraft are, for the time being, willing to position the unmanned aircraft as a long-range, heavy-payload complement to a fighter, rather than an alternative-but privately they don´t expect to hold that position forever. “We don´t want to get in a fight with anybody,” our source says. “But when we get flying, someone will say: ´For crying out loud, this does 90 percent of the mission at half the cost.”