This paper battery is powered by bacteria in your spit

Sometimes a Duracell just won’t do. 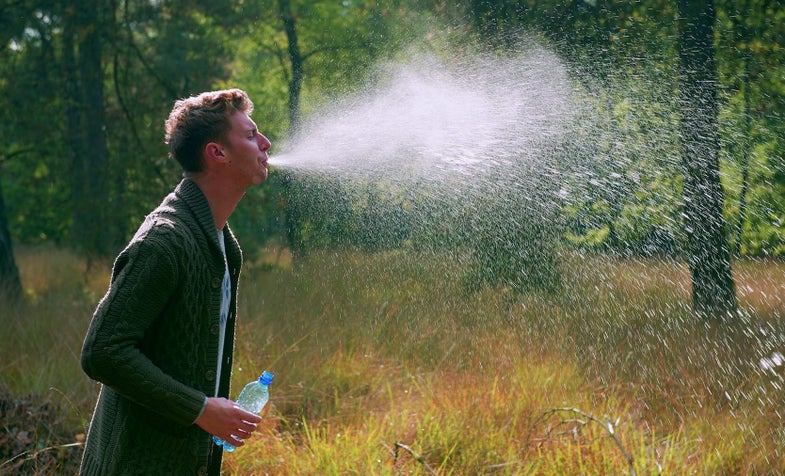 Researchers at Binghamton University have created a paper-based bacteria-powered battery. One drop of saliva can activate the device, which can generate enough electricity to power an LED light for around 20 minutes. The battery is the subject of a new paper published in the journal Advanced Materials Technology.

“The battery includes specialized bacterial cells, called exoelectrogens, which have the ability to harvest electrons externally to the outside electrode,” said Seokheun Choi, a professor for computer science at Binghamton University and coauthor of the study. “For the long-term storage, the bacterial cells are freeze-dried until use. This battery can even be used in challenging environmental conditions like desert areas. All you need is an organic matter to rehydrate and activate the freeze-dried cells.”

Exoelectrogens are microorganisms with the ability to transfer electrons beyond their cell walls to an electrode. All they need is something to eat. In Choi’s battery, saliva serves two functions. It rouses the frozen cells from their slumber, and it provides food for the microorganisms. Within minutes of spitting on the exoelectrogens, the battery will start churning out electricity. Choi said the device is “the first paper-based bio-battery activated by body fluids.”

“This is all about a disposable, easy-to-use, and portable bio-battery that can generate power from bacterial metabolism,” said Choi. “This battery is ready to operate with human body fluids like saliva for on-demand power generation for other disposable low-power applications such as biosensors.”

The device can be used to power pregnancy tests, HIV tests, glucose sensors and other medical devices. This is a huge advantage in developing countries, where people may not be able to afford conventional batteries. Anyone with a mouth can use Choi’s paper battery. In fact, any source of organic material will do the trick. If a user is feeling especially parched, he can pour a few drops of dirty water onto the battery to get it going.

The battery is made of just a few materials, including paper, carbon and printing wax. It can be manufactured cheaply and disposed of easily, compared with conventional batteries, which can leach toxic chemicals into soil and water supplies after they are thrown out. Choi’s battery is kinder to the environment and, it has a long shelf life.

Choi has spent the last five years developing paper batters that fold up into origami shapes. He imagines linking batteries together to deliver more power to larger devices. Said Choi, “The beauty of using paper is that you can easily fold and stack them to connect the batteries in series or in parallel to improve the performance.”