The rice would help those who suffer from mineral deficiencies in developing countries, but the agency hopes U.S. shoppers will bite, too. 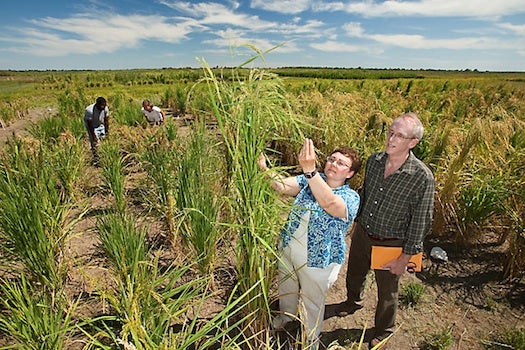 In Malaysia, there grow four types of rice with more molybdenum—a mineral that helps rice plants deal with acidic soil—than any other rice on Earth. In other parts of world, different varieties of rice are naturally richer in calcium, potassium, iron and other minerals people need.

At the U.S. Department of Agriculture, scientists have tested 1,643 types of rice from around the world to find the ones that are the most nutritious. “It’s like, where in the world are the genes we’re looking for?” Shannon Pinson, a USDA geneticist, tells Popular Science.

In the future, the USDA hopes such knowledge will help breeders create rice varieties that may help with mineral deficiencies in developing countries where rice is a staple. Grown-in fortification might find a market among U.S. shoppers, too. For one thing, it would mean white rice could have the same nutrients that now only appear in brown rice, or in white rice that’s enriched after the fact with minerals added to its surface.

Interestingly, the USDA’s plan is to help breeders grow rice with the minerals they want, not to genetically engineer it. Once scientists find the genes that are responsible for mineral levels—the next step in their research—they’ll hand that information over to plant breeders. “I’m right next door to the breeder at the University of Arkansas,” Pinson says. “I’ve got stuff in her fields and she’s got stuff in my fields.”

Breeders create new varieties of rice the old-fashioned way, by reproducing only the plants with the genes they want.

Pinson’s lab’s avoidance of genetically modified rice isn’t about whether GMO foods are good or bad, she says. She simply doesn’t have the facilities to genetically modify rice. “In fact, I don’t think GMOs are a problem,” she says. “My personal opinion is, I would eat them.” But she doesn’t study them.

Instead, Pinson’s line research is at once old and new. Of course, humans have bred and selected for the plants they want for as long as they’ve farmed. Even identifying and targeting specific genes is a well-known technique that researchers have honed since the 1980s. Most of the rice, as well as the corn and wheat, that Americans buy in grocery stores have benefitted from these non-engineering genetic techniques, Pinson says. That nice, dry, fluffy texture American rice has? That came from work done by researchers like Pinson.

Making mineral-enriched grains is more difficult, however, because it involves many genes. It also involves many interacting minerals. You don’t want to increase the calcium in rice, for example, only to decrease magnesium at the same time. So cooked rice texture, which is controlled by one gene, came first. Then resistance to a fungus called blast. Mineral content is a farther frontier; Pinson guesses people won’t see high-calcium or high-iron rice in supermarkets for another 20 or 30 years.

The idea of genetically enriching rice to deal with malnutrition has a notorious predecessor. In 1999, researchers invented the first variety of golden rice, which was genetically engineered to produce vitamin A. It was supposed to help kids in developing countries who don’t get enough of the nutrient. It met with fierce opposition from groups ranging from Greenpeace to local groups where the rice was supposed to go. Research on golden rice is still ongoing, but with its setbacks, it’s progressed much slower than originally promised.

Unlike mineral-enriched rice, golden rice cannot be bred, as no varieties of rice produce vitamin A on their own. It’s got to be engineered in.

Pinson doesn’t have a lot to say about golden rice, besides that she would eat it. She says her research group is sensitive to two major market forces: One, rice appears in many American baby foods and even those who don’t normally buy organic often prefer organic baby food. GMO rice can’t be organic, but bred rice, even if it’s bred using the genetic knowledge Pinson develops, may still be grown organically. Two, roughly half of the rice the U.S. grows is exported, and many countries don’t wish to import GMO foods.