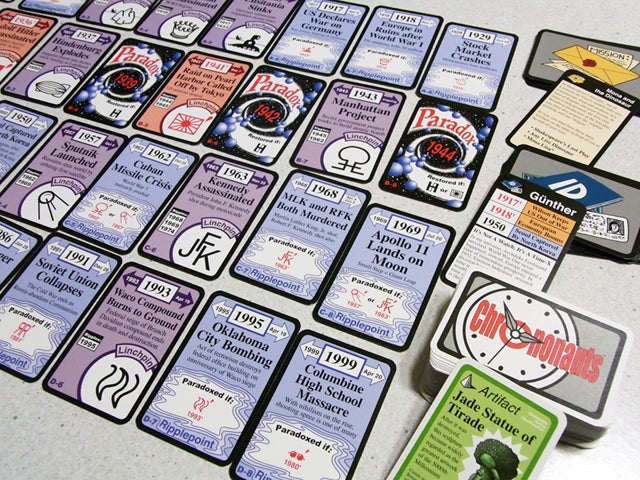 Mess up enough history, and the paradoxes will overwhelm the space-time continuum, ending the world. EUS, via Wikimedia Commons
SHARE

Mention time travel at a nerd party, and other guests will immediately respond with a grim conundrum: What happens if a time traveler goes back in time and kills one of his ancestors? This is the “Grandfather Paradox.” In a simulated environment, a team of mathematicians tested the paradox, and made a remarkable discovery: In time travel simulations, at least, history repeats itself.

The Grandfather Paradox makes a mess of time travel. A murderer kills his ancestor, preventing his own birth, thereby preventing the murder, thereby being born, thereby committing the murder, and so on. To observe it, a team of researchers, led by Martin Ringbauer, created a simulation. Instead of firing up a DeLorean to 88 miles an hour, they sent photons through a “closed timelike curve,” or CTC. The photons are paired up so that one follows the other. It works like this:

After the simulation, they found that the second photon exited the simulation the same as the first. An earlier conjecture held that, even with 50/50 odds that a time traveler kills his grandparent, that’s enough uncertainty to make survival likely. This new simulation adds in observation: because the second particle behaves like the first, the existence of the grandchild is evidence that the grandfather lives.

So don’t worry about time traveling descendents coming back with criminal intent. Odds are it’s safe.