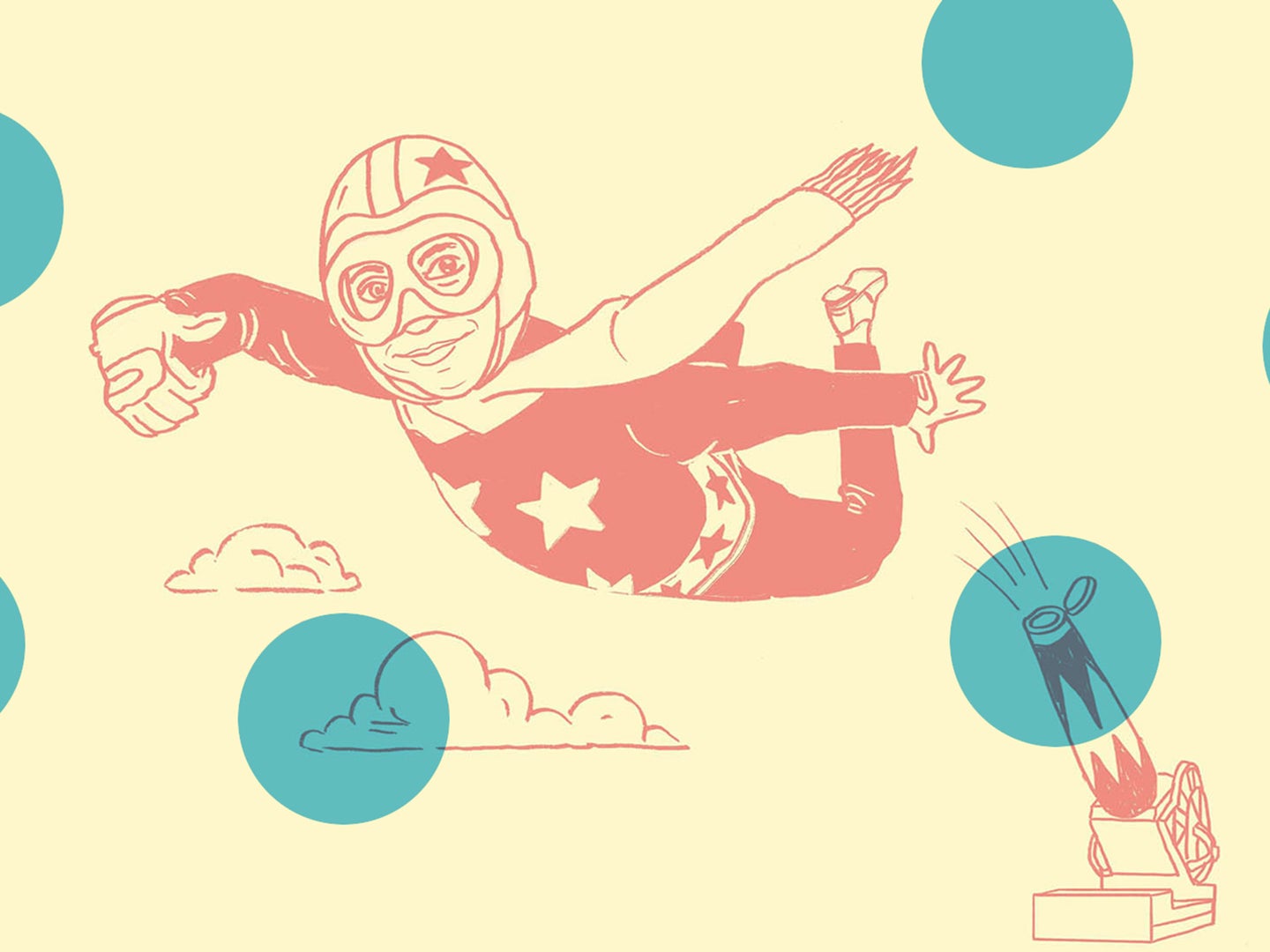 Why do we love watching people defy death?

Explore the psychology behind our fascination with daredevils.

DAN BLOCK has an easy charm and a twinkle in his eye—a natural charisma that would surely serve him in all manner of glamorous professions. That makes it all the more jarring to see him stick a power drill up his nose in front of a cringing crowd of onlookers.

After taking a moment to angle the machine just so, he turns it on, the bit rotating at dizzying speeds inside his head. The terrible whirring sound is enough to make even me—a stalwart masochist and the author of a book about the pleasure of pain—nearly black out from the rushing sensation of dread. But instead of straightforward revulsion or concern, my wooziness transmutes into a celebratory high. If the shocked silence that gives way to applause and relieved laughter is any indication, I am not alone in feeling a surge of something wonderful. The terrible act thrills performer and audience alike. But why?

First, there’s the question of what would compel someone—in this case my friend Dan—to put their body in peril. When he, a sideshow performer based in Austin, Texas, gets ready to use his face drill (or set a mousetrap off with his tongue, or inflate a balloon that’s been snaked through his nostrils, or hang weights from his eyelids, or…) his body senses the impending danger, and his gray matter gets to work. According to Arash Javanbakht, a psychiatrist and director of the Stress, Trauma, and Anxiety Research Clinic (STARC) in Detroit, Michigan, the two almond-shaped areas of the brain that form the amygdala oversee “salience detection and the creation of emotions.” In the most basic terms, he says, “Every time I see something, the amygdala decides if I should run away from it, attack it, eat it, or have sex with it.”

Faced with fear, excitement, and danger, this region calls other areas of the brain into action, gearing the whole noggin to fight-or-flight mode. This means doling out a blast of neurotransmitters like dopamine, increasing focus on the task at hand, and ramping up the sympathetic nervous system. The heart pounds, and blood pressure inside the muscles juices up the limbs in preparation for a chase or a rumble. “Breathing gets faster, mouth dries, we get a little bit sweaty,” Javanbakht explains. “I’m not suggesting that the daredevil doing some stunt is terrified, but there is that excitement.”

And, lucky for us, even bystanders can enjoy a secondhand rush. “We know that if you’re watching someone doing something related to fear or anger or aggression, you will have those same areas of your brain activate,” says Javanbakht. “That’s how empathy happens.”

This mirroring applies to movement as well. Using fMRI imaging, neuroscientists and physiologists have shown that when we watch someone do something, our brains seem to simulate the witnessed action. If we see a person jump into the air, for example, neurons light up in a similar pattern to the ones firing up when we jump ourselves—even if we are perfectly still. In that way, you can think of watching a stunt as a way to microdose the experience. Remember, for example, a time you saw a rock climber dangling off a cliff or a tightrope walker teetering in the sky. As an observer, you were in no real danger, but your body gave you some of the same signals it would set off if you were.

Internalized mimicry is helpful in that humans are very social animals, and we are constantly learning by observing each other. “There are great evolutionary advantages to being able to feel empathy. We don’t all need to have a near-death experience to appreciate that something is dangerous and we shouldn’t be doing it,” explains Brendan Walker, a former aeronautics designer and self-styled “thrill engineer” who tailors rides, installations, and other experiences to make them as evocative as possible.

Seeing another person cheat the reaper can also be instructive. “In nature, nothing happens for no purpose,” adds Javanbakht. When we watch someone defy death, be it by rock climbing or sword swallowing, we are present in the moment with them, participating from afar. “I’m actively in my own head, putting myself in that situation,” he says. “I’m practicing.”

Practicality aside, what’s the fun in activating your fight-or-flight response, or, stranger still, standing in awestruck wonder as someone else tongues the membrane between existence and the abyssal cleft of death? It turns out, there are major overlaps in how fear and excitement look and feel inside the body. What distinguishes the two is the context in which we experience those sensations. After all, Javanbakht notes, even something as pleasurable as falling in love comes with a pounding heart, shortness of breath, and clammy skin.

“What makes a difference in terms of being able to enjoy [the thrill] is the sense of control that we have,” he says. “Let’s say someone with a knife is chasing me on the streets. My feeling is very different than when someone with a fake knife is chasing me in a haunted house.” The important factor here is that one of the situations comes with the logical understanding of safety. Parts of our brain—the amygdala and other areas of the limbic system, or what Javanbakht calls “the animal inside of me”—sense the danger of the chase and get very worked up. But the prefrontal cortex, where we manage our emotions and think logically about how situations are likely to play out, understands theater and Halloween props and knows we are safe. That region helps us create a pleasurable context in which to enjoy the physiological cacophony of what feels like a brush with death.

Understanding why we aren’t necessarily afraid, however, doesn’t quite explain why we enjoy the sensation. Walker posits that the euphoric rush that comes with cheating death is also about “rewarding our persistence of life.” It’s a biochemical celebration of sorts—a way to feel joy and relief at continuing to exist. Evading danger, he says, creates a surge of happy-making transmitters, like adrenaline and dopamine. “I think it’s not even an emotion, it’s actually the movement of emotions,” he clarifies. “It is that movement, that rush of changing emotional space, that is what we term a thrill.”

Those fluctuations come in plenty of flavors, but we do have some sense of how they tend to unfurl over time. For example, when it comes to roller coasters, the high begins the moment you consider getting on, and it builds every time you make the choice to pursue that desire. Driving to the park, buying tickets, craning your neck to see the peaks and loops, waiting in line for your turn, all help psych you up for thrills. In 2007, Walker and a team of researchers from the University of Nottingham’s School of Psychology used wearable monitors and video cameras to measure physiological titillation on a ride consisting of one shocking, 180-foot vertical drop. They found something extraordinary: According to heart rate and sweat data, the most nerve-wracking, exhilarating part wasn’t clearing the precipice; it was the moment when the seat belt bar clicked into place. The actual experience of the drop registered at around 80 percent of the excitement of that moment of inevitability.

Even just anticipating someone enduring chills and spills can trigger a similar rush, thanks to our brains’ tendency to echo the feelings we observe in others. Even seeing an actor in a scary movie is enough to get our bodies worked up—a discovery that has given rise to the field of neurocinematics, or the study of how films affect our brains. “It’s a vicarious thrill,” says Walker. “You can live those emotions.”

We may not be able to do what the performer does, but through observing them, we have a chance to rejoice in death defied before our very eyes. It’s a way to feel fear, yes, but followed by a heady dose of mastery and control and jubilation. “Watching a performer playing at those dangerous edges is a form of entertainment,” said Walker. “[It] allows us to quite safely experience being alive.” Through witnessing the act, we feel the same fears, trials, victories, and, yes, thrills.

The secondhand jolt of another’s improbable persistence certainly has a compulsive draw for many of us. I asked Dan the drill sniffer, known to many as “The Amazing Face,” why he thought people were drawn to his shows of pain and derring-do. “I don’t think there is a singular reason,” he mused. “I think it’s like eating candy. Everyone has a sweet tooth, but we’re all looking for different things.” In his line of work, he sees people who wish they could emulate his acts, people who get a hit of fiendish glee at the thought of how bloody a high-stakes failure could be, and people who watch on with horror at feats that they themselves would never attempt. “Whatever we get out of it individually, everyone is looking to be entertained and to see the unbelievable.” Even knowing how Dan keeps his cranium intact doesn’t curb the terror. If you’re curious: He’s worked over the years to get to know—and subtly widen—the shape of his nasal cavity, and so has learned how to angle the bit to give it enough room to whirr without making contact. The real trick is not sneezing while it’s happening, which would-be blockheads on the Internet say takes lots of practice with less-lethal insertables.

Is it any wonder that we are drawn to witness the impossible made real? We as a species are facing a climate apocalypse, wars, pestilence, and famine. As pain clown poet laureate Steve-O of the Jackass franchise reminds us, escaping death is the ultimate unattainable fantasy: “Human existence is a prank on us because we only have one instinct, which is to survive,” he opined in the midst of a hot-wing-eating gag on YouTube in 2021. “And we only have one guarantee, which is we won’t.” Perhaps we are drawn to gawking at thrills because it allows us to snatch the joy of persistence from the jaws of certain death—even if just for a moment.