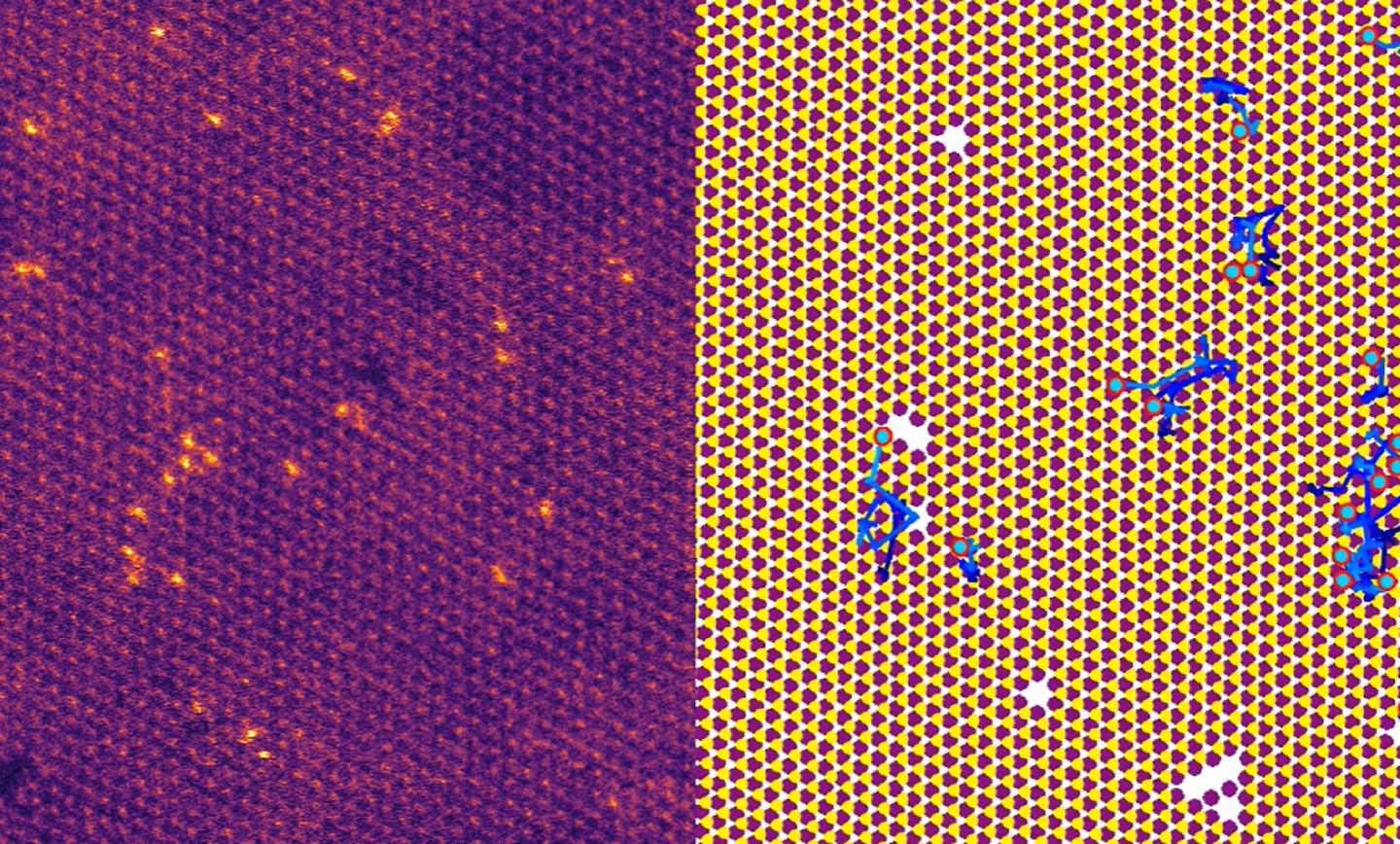 Left to right: Platinum atoms in liquid graphene under a transmission electron microscope in a colorized image; platinum atom trajectories are shown with a color scale from blue (start) to green, yellow, orange, then red. Clark et al (2022)
SHARE

It’s summer, it’s hot, and these atoms are going for a swim.

For the first time ever, materials scientists recorded individual solid atoms moving through a liquid solution. A team of engineers from the National Graphene Institute at the University of Manchester and the University of Cambridge, both in the UK, used a transmission electron microscope to pull off the delicate feat. The technique lets researchers view and take images of miniscule things in extraordinary detail. Typically, however, the subject has to be immobile and held in a high-pressure vacuum system to allow the electrons to scan properly. This limits the microscope’s use at the atomic level.

The engineers got around this by tapping a newer form of the instrument that works on contained liquid and gaseous environments. To set up the experiment, they created a “pool” with  a nanometers-thin, double-layer graphene cell. Their “swimmers” consisted of a sample of platinum atoms covered in a salty solution, or adatoms, because they were sitting on mineral crystals.

Once it was in the liquid graphene, the solid platinum moved quickly. (For context, the looped video below is shown at real speed.) The team tested the same reaction with a vacuum in place of the graphene cell. They saw that the platinum atoms didn’t react as naturally in the traditional setup.

After recreating the motion in liquid more than 70,000 times, the team deemed their methods successful. They published their work in the journal Nature on July 27.

The results could make waves for a few different reasons. One, it “paves the way” for transmission electron microscopes to be used widely to study “chemical processes with single-atom precision,” the scientists wrote in the paper. Two, “given the widespread industrial and scientific importance of such behavior [of solids], it is truly surprising how much we still have to learn about the fundamentals of how atoms behave on surfaces in contact with liquids,” materials scientist and co-author Sarah Haigh said in a press release.

A growing number of technologies depend on the interplay between solid particles and liquid cells. Graphene, which was discovered by researchers at the University of Manchester in the early 2000s, is a key component in battery electrodes, computer circuitry, and a new technique for green hydrogen production. Meanwhile, platinum gets made into LCD screens, cathode ray tubes, sensors, and much more. Seeing how these two materials pair together at the nanometer level opens up a more precise, efficient, and inventive world.