A rare two-headed turtle is alive and thriving, surprising scientists

The bicephalic reptile is thriving. 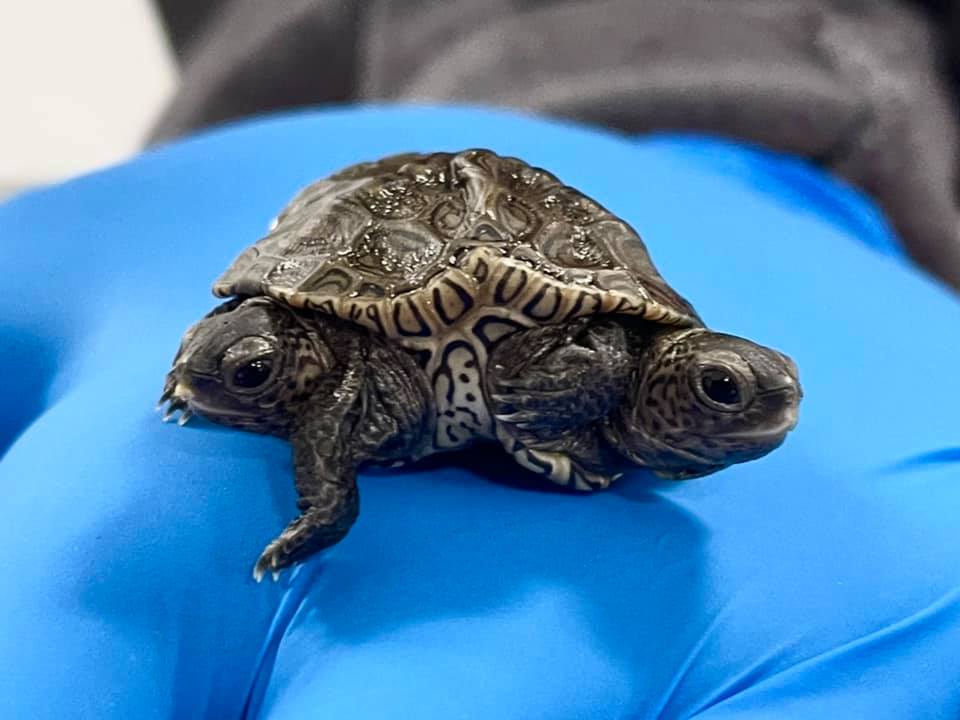 A diamondback terrapin turtle hatched a couple weeks ago with two heads, a condition called bicephaly. The two-skulled, six-legged reptile was brought into a Massachusetts wildlife center, and while it currently seems healthy, veterinarians are continuing to closely monitor its health.

The hatchling looks like a pair of conjoined twins, with two independently moving heads poking out of its green shell. When the turtle splashes around in water, each skull comes up at different times to breathe, and each head controls its own set of three legs. X-rays also show that hidden inside the shell are two distinct gastrointestinal tracts—though they partially share a spine. The Birdsey Cape Wildlife Center in Barnstable, MA, has a terrapin program, so the two-headed reptile was brought in on September 22, shortly after hatching at a protected terrapin nesting site in Barnstable. The Center introduced the little guy in a recent Facebook post.

“When they came in, wow—it knocked us on our butts because we’ve never seen a bicephaly animal or turtle before,” Katrina Bergman, CEO of the New England Wildlife Centers, told The Washington Post.

Staff are checking in often with the terrapin to make sure the terrapin seems happy and not in pain (as bicephalic animals often tend to be). “Animals with this rare condition don’t always survive very long or live a good quality of life,” reads the Center’s Facebook post. Bergman also told The Washington Post that if it seemed the turtles were in pain, “we would humanely euthanize them, but as far as we can tell, they’re happy little guys.”

Over the past couple weeks, the turtle(s) have been experiencing a normal life of eating, swimming, and gaining weight. Once they are a little bigger, the terrapin caretakers plan on getting them into a CT scan to better understand their internal structure. And they need to grow a little more before vets can determine their sex.

Diamondback terrapin turtles are a threatened species in Massachusetts. Adult terrapins can grow up to 10 inches (25 cm), weigh more than 2 pounds (1 kilogram), and can live for decades. Mary-Kate and Ashley may not reach those markers, and probably won’t ever be released into the wild.

“This is a mutation that would not survive in the wild,” terrapin population ecologist at Ohio University, Willem Roosenburg, told The Washington Post.

But right now, the two-headed turtle is thriving, and the only thing to do is to keep monitoring it as it lives and grows. “They’re eating really well,” Bergman told The Post, “they’re cute as all heck.”