This one image illustrates the severity of climate change 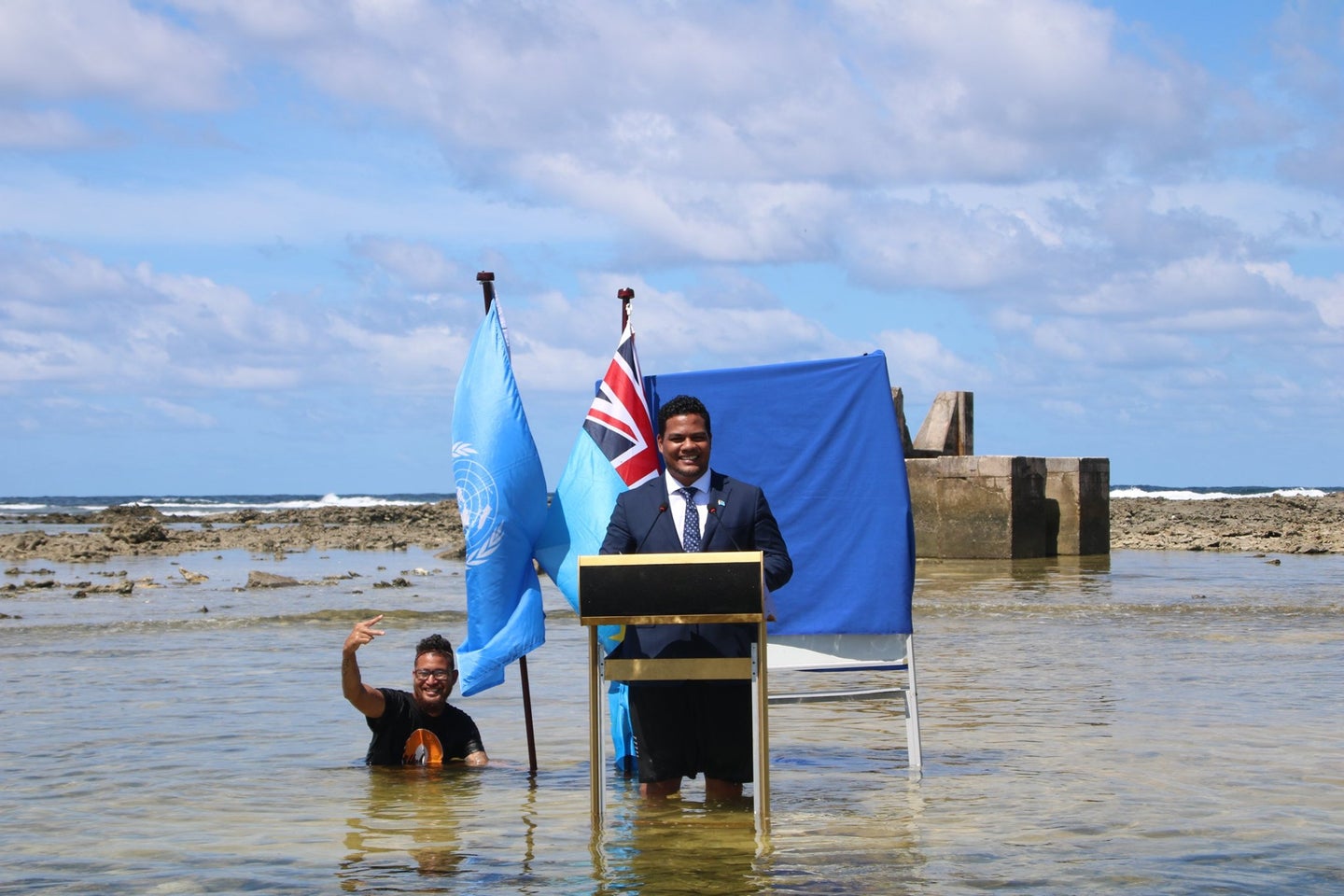 Simon Kofe's spoke on behalf of the island nation of Tuvalu in a pre-recorded video for the United Nations' COP26 climate talks. Ministry of Justice, Communication and Foreign Affairs, Tuvalu Government
SHARE

Tuvalu representative Simon Kofe delivered a speech to delegates at the United Nations climate talks in Glasgow in a memorable way this week by standing in the rising seawater he was warning the world about. In the four-minute-long video, Kofe, the Tuvalu minister of Justice, Communication and Foreign Affairs, explained there is no time left for speeches because coastal areas are flooding, and not just in small island nations like his.

[Related: The people hit worst by climate change get the least air time at COP26]

Tuvalu, which has a population of nearly 12,000 people spread across nine small islands between Hawaii and Australia, is literally sinking as sea levels continue to rise from melting ice due to increased temperatures. The highest elevation across the archipelago is only 15 feet, and although studies show the islands may be adapting to the water levels, flooding and erosion are expected to accelerate. Already, parts of the Pacific Ocean have risen by just about a foot.

Delegates in Glasgow watched Kofe’s recording from the blue waters of the South Pacific more than halfway through the COP26 meetings. He explained that his speech was not just a statement, but a call from his country to other governments to strive for net-zero emissions, increase funding for climate support, and keep global temperatures from increasing more than 1.5 degrees Celsius.

Places like Tuvalu have already begun to prepare for the worst-case scenario; the possibility that they may lose their island nation to the sea is real, Kofe explained, and something that the rest of the world has not yet been forced to consider. In Tuvalu, there’s a push for resilience projects, but efforts are already underway to guarantee the sovereignty of the nation and its maritime boundaries even if it’s completely engulfed by the ocean.

Tuvalu’s plight is an example of the unequal effects of climate change—its residents are facing much harsher consequences of greenhouse gas emissions than others, despite contributing little themselves. Despite their small role, Kofe said his country would continue to promote their value in shared responsibility as caretakers of the planet.