Not just for fictional villains anymore 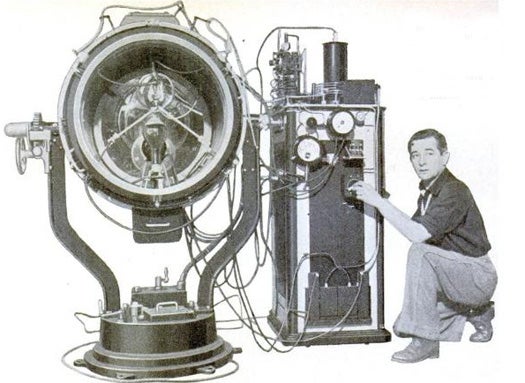 The words “death ray” conjure up a lot of mental images: twirling mustaches, evil laboratories, a dashing man in a suit to foil the plot, etc. But it turns out death rays aren’t just the things of stories. They actually make a few entries in the pages of history as well, especially in the 30s, for some reason.

The results are about what you’d expect–experiments killing mice, detonating mines from a distance, shutting down engines and so on. All to be taken with a healthy serving of skepticism. Of course, it’s not all doom and gloom. Sometimes the rays rained death upon germs, or cancer. And one brave soul realized that the horrible power of a death ray was too much to entrust a human to wield, so he vowed never to reveal its secret, for the good of mankind.

Explore all the high-stakes drama in the archive gallery, and feel gratitude that these things never really caught on.

When British inventor Harry Grindell-Matthews claimed to have invented a death ray, our intrepid reporter was on it. He headed off to London to witness Grindell-Matthews perform the following four feats in his laboratory:

This is German chemist Kurt Schimkus, but don’t let his funny name or the fact that his invention looks kind of like marionette strings lull you into a false sense of security. He successfully used this death ray to explode a land mine from 200 yards away.

This death ray projects a mixture of ultra-short radio waves and infrared radiation. The California inventor successfully used it to kill insects in 30 seconds, and a snake in nine minutes. No one seemed concerned that mammals might be next.

The world’s largest electromagnet, at the University of California, produced a greenish-blue ray of positively charged particles which we proclaimed to be “the most powerful beam of radiation ever produced by man.” It was so dangerous that “a finger placed in this ray for only an instant would be lost.” Sounds like your typical doomsday scenario, or just another day at Doofenshmirtz Evil Inc, but these researchers chose to look at the positive and found through experiments that it could be more effective at attacking cancer cells than both radium and x-rays: “Here, it would seem, is the nearest thing science has ever produced to a ‘death ray’ that can be projected through the air on a mission of destruction. Yet its creators hope, when they have learned to control its terrific power, to turn it into a veritable ray of life.”

Death rays aren’t just for evil geniuses hell bent on world domination. Sometimes, they kill germs. This germicidal lamp uses an electric current run through a slender tube filled with gas to create rays that destroy mold and bacteria. Scientists hoped it would kill the microorganisms responsible for spoiling food, and save millions of dollars worth of perishable goods.

While researching radiation treatment for cancer, Dr. Antonio Longoria allegedly invented a death ray that was able to kill pigeons on the wing from four miles away. Horrified by what his hands had wrought, he “deliberately destroyed the lethal machine for the good of humanity.” The ray worked, he said, “by changing the blood into a useless substance, much as light transforms silver salts in photographic processes.” But he vowed never to reveal any further secrets about it, hoping, presumably, to keep it out of the hands of evildoers.

It should come as no surprise to anyone that the Pentagon was interested in a death ray. What is surprising is that military planners were not intending to use the lasers to kill people at a distance (+1 for humanity), because “current weapons–from rifles to hand grenades–are cheaper, more portable, easier to use” (-1 for humanity). They were more interested in using them to disable incoming missiles, or for radar tracking. When this article was published, the Pentagon was “backing the search for laser weapons as much as it did the development of the atomic bomb in World War II,” and had already “shot down at least one small drone aircraft with a laser beam.”