Chemically stimulating the neurons in mice that respond to stroking could lead to better pain relievers for us. 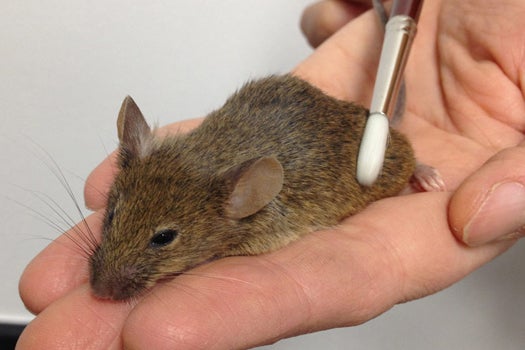 Do animals actually enjoy petting? Mice seem to, according to new research from the California Institute of Technology, where scientists picked out the neurons that fire when a mouse is stroked. There are hopes that identifying similar neurons in humans could help develop new pain or stress-relieving drugs.

In a study published online today in Nature, researchers identified the nerves that respond to pleasant, massaging stroking in mice. The nerves, found under hairy skin, are called C-tactile fibers in humans, and they’re why we enjoy cuddling and massages.

Researchers found the corresponding nerves by injecting mouse embryos with a gene that caused the neurons to light up when active. They found that the C-tactile-like neurons were activated by stroking the mouse’s hindfoot with a paintbrush, but not by pinching it with tweezers.

Once they identified what was activating the sensation, scientists genetically modified other mice so their neurons would respond to a chemical stimulus that mimicked the feeling of stroking or grooming.

To test whether the mice actually liked this feeling, they were put in two different chambers after being exposed to either the chemical massage or to simple saline. Before the test, most of the mice exhibited a preference for one chamber or the other, so the chemical massage was set up in the non-preferred chamber.

After four days of conditioning, the mice increased the time they spent in the chamber that they associated with the massage — the chamber they initially didn’t care for. This suggests that activating these neurons provided a positive or anxiety-relieving experience.

If we could develop a similar chemical stimulant for humans, it could improve the effects of massage for rehabilitation or psychiatric care, Univeristy of Gothenburg neurophysiologist Johan Wessberg told New Scientist.