Two new studies take a step toward a therapy for multiple sclerosis, cerebral palsy and other diseases of the myelin. 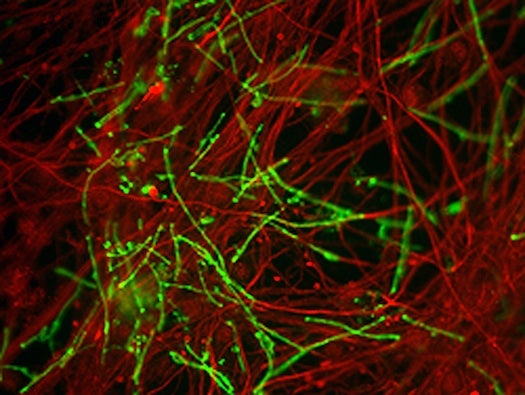 In what one researcher called “cellular alchemy,” two different teams of scientists have reported transforming mouse and rat skin cells into brain cells of the type that’s destroyed during multiple sclerosis, cerebral palsy and certain other disorders.

“We are taking a readily accessible and abundant cell and completely switching its identity to become a highly valuable cell for therapy,” Paul Tesar, a geneticist at Case Western Reserve University in Ohio, said in a press release. “It’s cellular alchemy.”

The type of cell that the researchers made is a young, immature version of an oligodendrocyte. Oligodendrocytes normally wrap the nerve fibers of the brain and spinal cord in a protective coating called myelin. With certain diseases, though, people lose that coating or suffer damage to it, which can lead to severe symptoms, such as losing control of the arms and legs.

One major idea researchers have for curing such diseases is adding myelin back by transplanting young, immature oligodendrocytes into the patient. The cells are then supposed to mature and wrap themselves around exposed nerve fibers they find. (Older, more mature oligodendrocytes don’t seem as prone to finding and sheathing exposed nerve fibers.) The idea has worked in lab animals genetically engineered to not have myelin—wohoo!—but there’s a drawback. Until now, researchers generally made oligodendrocytes from stem cells taken from embryos. That’s fine for mice and rats, but it’s difficult to harvest and grow enough embryonic human stem cells for transplants in people.

These two new studies, both published yesterday in the journal Nature Biotechnology, took a step in the right direction by transforming mouse or rat skin cells into immature oligodendrocytes. Both teams, one from Case Western Reserve and the other from Stanford University in California, fiddled with the genes that are active in the skin cells. Each team found three genes that were key to changing the identity of skin cells, although the teams did not find the exact same three genes: Two of the genes were the same between the two groups, but the groups used a different third gene.