Apparently we like them with the part of our sensorium that evolved to detect spoilage. 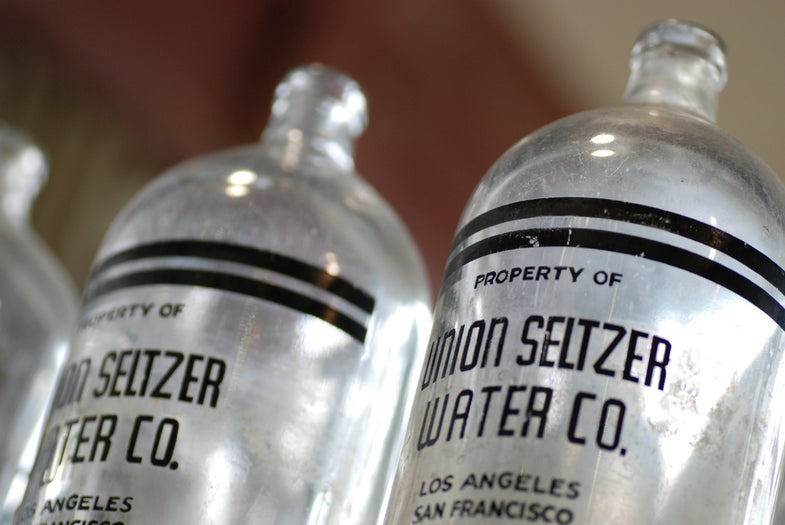 Drinking carbonated water has been in vogue since at least 1767, and it doesn’t seem to be going anywhere. So what gives us our taste for the sparkling stuff?

It’s still not completely clear what characterizes the sensation of carbonation. People assume carbonation is the feeling of bubbles popping on the tongue, but when people drink carbonated beverages in a pressure chamber, where bubbles don’t burst, they describe it the same way. So it’s not purely mechanical.

Chemically, adding CO2 to water creates carbonic acid, which is tasted by sour-sensing taste cells. Research has suggested that a certain enzyme, carbonic anhydrase, sits on those cells and reacts with the acid to cause carbonated water’s familiar popping sensation. (Fun fact: climbers who take altitude-sickness drugs that block the enzyme, then drink champagne, report the bubbly as having a dishwater-y taste.) That enzyme, combined with a reaction occurring in the body’s trigeminal nerve, could be what gives carbonated water its unique sensation. But if you were an alien studying human taste habits (for the coming food-based invasion?), you might expect carbonated water to be downright repellent: the carbon dioxide in the fizzy drinks triggers pain receptors.

We should ostensibly hate that taste of CO2-based goodness.

Another study shows that increased amounts of carbon dioxide in a beverage can lead to a perceived increase in the coldness of the beverage, while actually cooling the water increases irritation. That indicates there’s some kind of relationship between carbonated water’s “bite” and an enjoyable cooling sensation, although the chemical process underlying the effect isn’t totally clear.

If you were an alien race studying human taste, you might expect carbonated water to be downright repellent.”We tried to get mice to drink carbonated water–and they don’t. They don’t like it,” says Nicholas Ryba, a senior investigator at the National Institute of Dental and Craniofacial Research. That, Ryba says, indicates there’s not a chemical process that naturally draws all mammals to carbonated water. Ditto for horses and other animals, says Bruce Bryant, a senior research associate at the Monell Center, a nonprofit research institute for taste and smell. Animals have several CO2-detecting systems, possibly a gift from evolution for detecting not-so-great stuff that emits carbon dioxide, like rotting food.

One theory why Homo sapiens, Bryant says, are the exception to the rule: “There are certain people who enjoy life at the edge.” (Lock up these carbonated-water-drinking thrill-seekers immediately, for their sakes and for the public’s.)

That’s actually not a crazy theory, and Ryba agrees it’s one possibility. The closest analogy is spicy foods: back in 1997, psychologist Paul Rozin released a paper arguing that spicy foods were an example of people “enjoy[ing] situations in which their bodies warn them of danger but they know the are really okay.” Same, the idea goes, for carbonated water and its tingly, mildly irritating effects.

To top things off, Bryant adds: “We’re still trying to figure out when people say something’s ‘refreshing,’ what that is.”

So the science is a little messy. Oh, well. Enjoy your tasty (?) bubble-water.