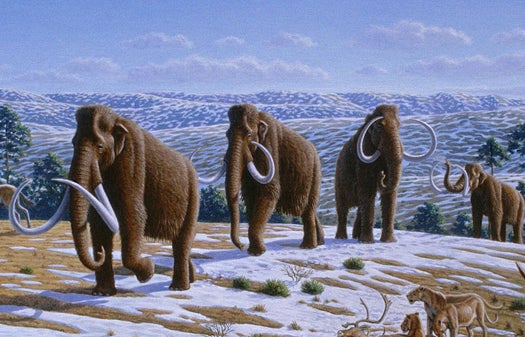 It has become awfully easy to discover woolly mammoth remains in northern Russia as the permafrost thaws–so easy a child could do it. (Thanks, climate change!) Still, we have to give some credit to the 11-year-old who stumbled upon an exquisitely preserved adult mammoth recently.

Yegevny Salinder was walking his dogs alongside the Yenisei river bank, when he smelled the mammoth’s heels. That’s right, smelled ’em. The “unpleasant” odor led him to a 30,000-year-old giant fossil that had a skeleton, ears, a tusk, some facial features and even a 1.5-meter long penis intact.

Mammoth experts from Moscow’s Zoology Institute dug up the mammoth, which is now on his way to Moscow for further study. Alexei Tikhonov, director of the Institute’s Zoological Museum, suggests that geneticists might try to clone him.

[BBC News and The Telegraph]