At a speech at Georgetown University, he laid out the basics for how the country will combat climate change--whether or not Congress helps. 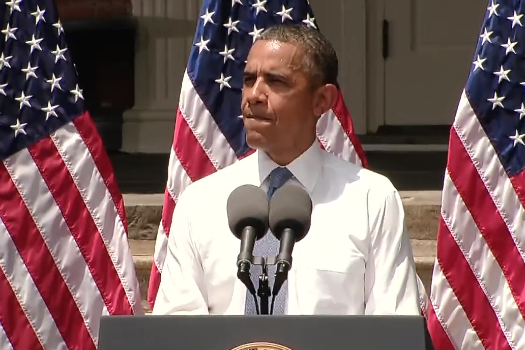 “We don’t have time for a meeting of the Flat Earth Society,” President Obama declared in a speech at Georgetown University today, firing a shot at climate change deniers during his unveiling of a new climate action plan, a broad outline that includes efforts to curb greenhouse gas emissions and invest in clean energy at home and abroad.

The president’s 21-page climate change initiative has been a long time coming for many who felt that Obama’s rhetoric on climate change has been more bark than bite. During his State of the Union in February, he promised to come through with executive actions to reduce pollution, increase protection against the damage caused by climate change, and transition us to cleaner energy sources.

It seems that he’s following through, pledging in his three-pronged plan to cut carbon pollution, prepare communities and infrastructure for the impacts of climate change, and lead the international effort to fight pollution and expand clean energy use.

“Americans across the country are already paying the price of inaction,” he noted in his Georgetown speech. “The question is not whether we need to act. The overwhelming judgment of science–of chemistry and physics–has put all that to rest. The question now is whether we have the courage to act before it’s too late.”

The main tenant of the new plan involves setting federal standards limiting carbon pollution from both new and existing power plants, which generate about a third of our greenhouse gas emissions nationwide. “We have already set limits for arsenic, mercury, and lead, but there is no federal rule to prevent power plants from releasing as much carbon pollution as they want,” the plan states.

A section on “using sound science to manage climate impacts,” promises $2.7 billion of the President’s 2014 budget to researching climate science and developing better risk and catastrophe models, and the launch of a data initiative to provide federal climate data “to stimulate innovation and private-sector entrepreneurship in support of national climate-change preparedness.”

And while Obama called for America to lead by example when it comes to combating climate change, carbon pollution is rapidly rising in developing countries, he noted. “We compete for business with them, but we also share a planet and we have to all shoulder the responsibility of keeping the planet habitable.” That includes an end to U.S. support for public financing of most new coal plants abroad.

At home, the plan calls for greater use of clean energy, and for the U.S. to double its power from wind and solar energy, partially through permitting more renewable energy generation on public lands. Over the next seven years, all government agencies will shift to consume at least 20 percent of their energy from renewable sources like wind and solar.

However, he did not indicate that we would be weaned off fossil fuels anytime soon, and neatly sidestepped the issue of the controversial Keystone XL pipeline. “I do want to be clear: Allowing the Keystone Pipeline to be built requires a finding that doing so will be in our nation’s interest,” he said. “And our national interest will be served only if this project does not significantly exacerbate the problem of carbon pollution.” (Because we typically all agree with what the government thinks is in our nation’s best interest.)

Speaking of disagreements, throughout his remarks, Obama lambasted Republican obstructionism, saying that “this is a challenge that does not pause for partisan gridlock.” As he reminded the crowd, much of the wind power generated in this country comes from Republican districts in places like Iowa and Kansas anyway–Republican opposition to cleaner energy hurts their constituents there.

As The New York Times puts it, Congress “has shown no appetite for dealing with global warming and its attendant energy challenges in a comprehensive way.” Speaker of the House John Boehner’s response to the new plan: “I think this is absolutely crazy!”

As Obama moved into his rabble-rousing finale, he also called out the GOP for stalling his nomination of Gina McCarthy as head of the EPA, saying she has been “forced to jump through hoops no nominee should have to. The Senate should confirm her without any further obstruction or delay.” Will they listen? Doubtful, but nice try.

Regardless, it’s nice to see the president is finally taking our advice.