In his State of the Union Address, Obama promised executive action to reduce pollution and fund alternative fuel research. Got questions? We'll be at the White House later today to get answers for you. UPDATE: The Q&A; is over now. Thanks for your great questions! 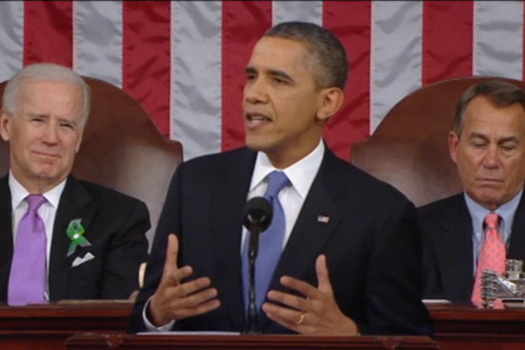 President Obama promised to make “meaningful progress” on the issue of climate change in the State of the Union Address last night.

Since his reelection, Obama has vowed to take charge on the issue of climate change in his second term. “Some may still deny the overwhelming judgment of science, but none can avoid the devastating impact of raging fires, and crippling drought, and more powerful storms,” he said in his inaugural address in January. “The path towards sustainable energy sources will be long and sometimes difficult. But America cannot resist this transition; we must lead it.”

In his address to Congress last night, he expanded on those remarks, both in calls for legislation and in promises of executive action. His goal is to reduce the energy wasted in homes and businesses by half within 20 years. He promised federal support to states that create jobs through the construction of energy-efficient buildings.

Obama also urged Congress to pass a bipartisan, market-based solution to climate change. Of course, that’s a tall order in this volatile political climate, so he followed up with a pledge to wield his executive power to combat climate change. (You can see Speaker of the House John Boehner’s eye-roll response over at the Atlantic Wire.)

“I will direct my Cabinet to come up with executive actions we can take now and in the future to reduce pollution, prepare our communities for the consequences of climate change and speed the transition to more sustainable sources of energy,” Obama said.

We must go “all-in on clean energy,” he continued, generating more wind energy and lowering costs for solar energy. He promised to speed up new oil and gas permits and clear red tape for natural-gas production. And he encouraged Congress to support research and technology to make natural gas more environmentally friendly.

He proposed an “Energy Security Trust” funded by oil and gas royalty revenues that the government collects from oil and gas leases on federal land and offshore drilling. According to The New York Times, that revenue is estimated to reach $150 billion in the next decade, depending on market prices and production. The trust would divert that funding into the research and development of alternative fuel sources to get cars and trucks off oil.

HAVE A QUESTION? SUBMIT IT!

Got questions about how all of this is going to work? Our own senior editor Paul Adams will be at the White House later today conducting a live-streamed Q&A with Heather Zichal, Deputy Assistant to the President for Energy and Climate Policy, and we want your input.

Submit any questions you have on energy and the environment here, on Twitter (@popsci #WHChat or #SOTU), or on Facebook.