In An Era Of Climate Change, Where Will The Fish, And The Money, Go?

How fish adapt to a warming world is top of mind for governments eager to profit off of a robust fishing industry. Will climate change rule in their favor? 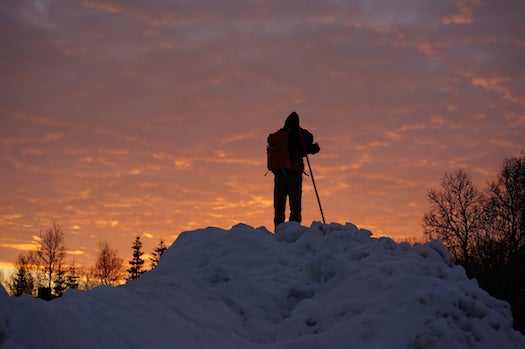 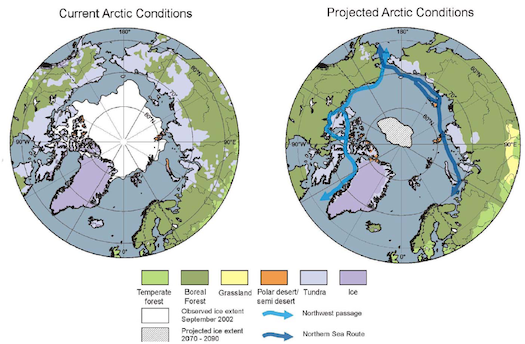 A map of current and projected Arctic conditions

Like the American pika and some other land-based creatures, fish are on the move as they try to adapt to a changing climate. One place this is happening is the seas surrounding the Arctic Ocean. But precisely how fast, in what direction, and to what effect the fish will migrate from their home turf is a big unknown.

DISPATCHES FROM THE ARCTIC

This series explores the science and implications of global warming in the North Atlantic Arctic. Boulder-based writer Susan Moran is filing live reports from the Arctic Frontiers conference in Tromsø, Norway.

Marine biologists and climate-modeling scientists are following their trail seeking answers. That trail emits a scent of money to fisheries operators. Although no commercial fisheries exist yet in the Arctic Ocean and adjacent continental shelf seas, operators know that could change. (Commercial fishing is currently concentrated on the sub-Arctic seas surrounding the Arctic Ocean.) Naturally, they want the potential bounty. So do nations inhabiting or otherwise potentially fishing in the Arctic. In fact, it’s one reason (along with its interest in fossil fuel and mineral extraction) why China is trying to secure observer status on the Arctic Council, a committee of eight Arctic states that together shape policy for the region.

The seas around the Arctic Ocean are estimated to host at least 20 percent of all the fish in the world’s seas. Aside from their economic promise the northern seas could also play a big role in contributing to global food security. “The world’s growing population means we need more access to food resources,” Lisbeth Berg Hansen, Norway’s Minister of Fisheries and Coastal Affairs, told the Arctic Frontiers conference I’m attending this week in the northern Norwegian city of Tromso. Norway exports more seafood than any other nation. Its cod and other commercial fisheries are concentrated in the Lofoten Islands in the Norwegian Sea, which boast the largest cod stock in the world.

Predicting future patterns of fish distribution and migration is difficult in part because the surface water termperatures in the Arctic waters are as warm as they have ever been, leaving no historical comparison points. Further, scientific models used to estimate marine primary productivity–namely the availability of phytoplankton that are the key ingredient in the diet of zooplankton and fish–are still quite crude and lack data. “There are huge discrepancies between them… something like two orders of magnitude,” said Benjamin Planque, a senior scientist at the Institute of Marine Research here in Tromso. (That’s approximately 100-fold.) The Institute conducts research related to fisheries and makes recommendations to the fisheries industry.

What is as clear as the pristine seas north of Norway, Sweden, Iceland, Finland, Denmark (including Greenland), Russia, the United States, Canada is that fish will only travel where they can find enough food. That’s why many marine scientists are trying to better understand current and future primary productivity there. “We are talking about some of the most productive ecosystems found in the waters adjacent to the Arctic Ocean,” said Paul Wassmann, an Arctic biologist at the University of Tromso. These waters are brimming with Greenland halibut, cod, capelin, Kamchatka king crab, along which those higher up in the food web–whales, seals and other marine mammals. He cautioned, however, that it is “an open question” how shifts in primary productivity in various locations will translate into fish stocks.

Here’s a snapshot of how some commercial fish species appear to be shifting:

-Cod are moving relatively slowly northward. Thanks to sound fisheries management practices among Norwegian and Russian operators and other factors, cod stock in the Barents Sea, located north of Norway and Russia, is at an all-time high, according to the Institute of Marine Research. Cod are nothing if not resourceful; they’ll eat each other (younger kin) when the pickings are slim.

-Mackerel have already expanded their distribution area to the north and west over the last few years, stretching well into Faroese and Icelandic waters. In fact, it’s a bone of contention between Iceland and Norway (I’ll leave geopolitics for another day). And they may be heading to Russia, which Dr. Wassmann calls the “climate change winner.”

-Capelin abhor super deep waters, so they are not expected to migrate into the Arctic Ocean itself.

Back to the fish diet. Primary production relies on a slew of elements, including sunlight, water and air temperature, currents, wind patterns, salinity, and sea ice cover and extent. All of these are moving targets in the Arctic under climate change. Average surface air temperatures in the Arctic are expected to increase by 3 to 6 degrees Celsius by the end of the century, according to estimates from the Intergovernmental Panel on Climate Change and the Arctic Council. And over the last 30 years the ice volume in Arctic has shrunk by at least 70 percent.

Climate affects all levels of food, especially those at the bottom of the food chain, phytoplankton. Other creatures that rely on phytoplankton, from zooplankton to fish to sea birds and whales, respond to climate indirectly, as Harald Loeng, research director of the Institute of Marine Research (IMR), noted at the conference.

While the Arctic seas are extremely productive, they are also very stratified, meaning there’s not much vertical mixing of nutrients in the ocean. As warming and thawing continue scientists expect the water column to be more stratified, which will prevent nutrients from percolating up to the surface.

That process means there won’t be enough food in the Arctic Ocean, at least not enough to lure a commercially harvestable amount of them. “It’s unlikely, even if surface water is exposed to winds (which transport nutrients from the bottom toward the top of the water column) [that it] will be enough to erode that stratification,” said Jean-Eric Tremblay, a biologist at Laval University in Quebec.

Susan Moran is a freelance journalist based in Boulder, Colo., covering energy development, climate science, agriculture, environmental health and other issues. She writes for the New York Times, The Economist, Nature and other publications. And she co-hosts a weekly science show on KGNU community radio, called “How On Earth.”