The bacterium found last week was an undiscovered lifeform. No, it was a contaminant. No! Yes! 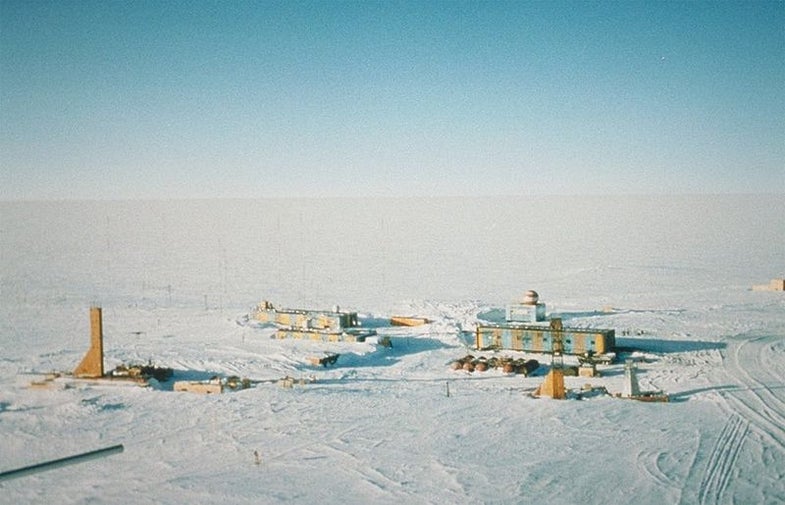 We never expected this particular saga to go smoothly, and so the latest tit-for-tat over Lake Vostok and its possible Brand New Lifeforms is depressingly familiar.

A quick primer: Lake Vostok is a large subglacial lake in the Antarctic. Scientists think that the ecosystem in the lake has been cut off from the outside world for up to 25 million years; that isolation could mean that Lake Vostok harbors forms of life now totally unknown to the modern age, trapped in a dark, frozen time-machine. Russian scientists have been drilling toward Lake Vostok for over a decade. After years of waiting to drill the last few meters into the lake (contamination of the unknown ecosystem was a big fear), the Russians finally reached Lake Vostok in February 2012. About a week ago, Sergey Bulat of the St. Petersburg Institute of Nuclear Physics announced that the Vostok team had found “an unclassified and unidentified” form of bacterial life — one that was only 86% similar to other bacterial taxa — in the samples taken from the lake.

Skeptics were quick to question the results, citing contamination as a more-likely source of the bacteria. As one microbiologist said to Nature, running across “uncultured and unsequenced” bacteria in the wild is totally typical–some 90% of all bacterial species on Earth fall into that category. Just because this putative Vostokian variety doesn’t match well-studied bacteria taxa is no indication that it’s actually new to science. Others were critical of the Russians’ methodology and general contamination of the sample, which was reportedly about 50% kerosene. The sample also had only 167 cells per milliliter of fluid, a very meagre haul. As another researcher (granted, one involved with a rival drilling group) sarcastically quipped to Nature, “They really need to stop playing around with frozen lake water bathed in kerosene and get a clean bulk water sample.”

Kerosene. Wherever the hell the bacteria came from, they were able to survive at subfreezing temperatures bathed in _kerosene_–that kind of blows my mind. (The Russians used kerosene in the borehole to prevent it freezing over during drilling.) Whatever that lifeform turns out to be, I have to give it props for surviving in that environment.

Of equal interest will be any results that come from a U.S.-led expedition to Lake Whillans, another Antarctic subglacial lake. Instead of kerosene, this group used a hot-water jet to make a borehole to the lake. In February, those scientists announced that they, too, had found life in lake water and sediment. But they stopped well-short of claiming “new forms of life.”

Only time and full genomic analysis will answer many of the questions lingering around the bacterial hauls from both lakes. And even then, as scientists have found to their chagrin, that might just be the beginning of the drama.