New Lighting Could Replace Fluorescents, CFLs, and LEDs As The Light Source Of The Future 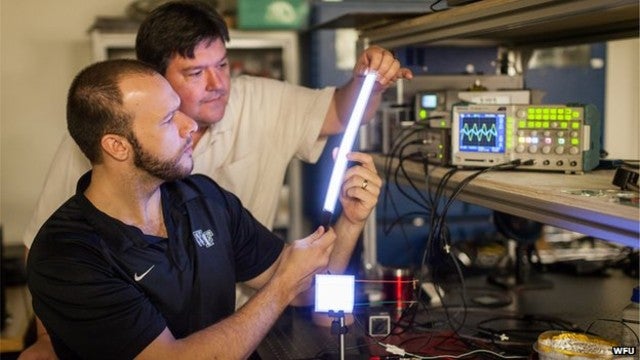 Like the desktop printer and the fax machine, the fluorescent overhead light might soon see a diminished role around the office. Researchers at Wake Forest University have developed a field-induced polymer elecroluminescent (FIPEL) lighting technology that silently gives off a soft, white glow, sans the annoying hum and yellow tint of fluorescent bulbs or the sharp, bluish hue of LED light fixtures.

FIPEL technology is by no means brand new, but turning it into a viable light source has taken some time. The Wake Forest team used a multi-layer white-emitting blend of polymers imbued with a small amount of nanomaterials that glow when stimulated with an electric charge. This nano-engineered polymer matrix is essentially a whole new type of light bulb, different from both the filament-filled Edison bulb and mercury-exciting fluorescent, as well as the LEDs and compact fluorescents (CFLs) that have been slowly replacing some traditional light sources in recent years.

Moreover, it is at least twice as efficient as CFLs (which are filled with hazardous materials that can leak into the environment if the bulb is broken–FIPELs are not) and roughly on par with LEDs, both of which emit light that is not quite suited to the human eye. And the FIPEL technology is tunable–it can be manufactured to give off the soft, white light human eyes prefer or to emit any other color, making it potentially useful for billboard lighting and other displays. Its form factor is even customizable–it can be molded into bulbs with Edison connections to fit existing fixtures, but also into large sheets or panels that could fit into ceiling tiles or wall spaces to provide lighting that is unobtrusively embedded in the spaces around us.

Perhaps best of all, FIPEL technology has been around for quite a while and is already well-understood, meaning two things: Firstly, we know the technology is long-lasting (one of the researchers has had a prototype FIPEL light source that he claims has worked for a decade), and secondly we already know how to produce it. This kind of FIPEL lighting could be on the consumer market as early as next year.