Lives often hang on Palenik's precise identification of a fiber or fleck of metal. In his workday, there's no room for error.

THE CASE OF THE WELDER’S DUST

The Evidence: In 1991, an 11-year-old girl was raped and murdered near Glennallen, Alaska. On her freshly laundered clothes investigators found flakes of glossy paint, tiny metal spheres and flakes, and red and blue polypropylene fibers. Charles Smithart, a local resident, had been spotted near the murder site, and the unusual interest he took in the case aroused suspicions, but investigators lacked evidence that directly linked him to the crime.

The Science: By subjecting the metal particles to the energy-dispersive X-ray spectroscopy detector on a scanning electron microscope, Palenik identified the spheres as iron and the flakes as brass. Iron dust takes globular form in only a few circumstances-such as when it is welded or subjected to grinding. Smithart engaged in welding in a shed behind his house, where he sometimes repaired bikes for neighborhood kids. The metal evidence, combined with strong similarities between the fibers on the girl and ones found on Smithart’s vehicle and clothing, helped convict him at his 1993 trial. He appealed but died of lung cancer in December 2000, before his case was reheard.

THE CASE OF THE FUEHRER’S TUNIC

The Evidence: Some years ago, a collector in San Diego, California, paid top dollar for a Nazi tunic whose label stated that it had belonged to Adolf Hitler. Then, concerned about its authenticity, he asked Palenik to examine it.

The Science: Palenik removed two kinds of fiber from the label. Viewing the first type under the polarized light microscope, he identified it as polyester (bottom left). The other fiber was cotton. When Palenik subjected it to the fluorescence microscope, he observed that it had been treated with an optical brightener, a substance that is applied to fabrics to make them look especially white (bottom right). The hitch: Neither polyester nor optical brighteners were available until after World War II. The collector sued; the case was settled shortly before it was scheduled to go to trial.

THE CASE OF THE DIMAGGIO JERSEYS

The Evidence: In 1997 Jerome Romolt, a sports agent, paid Joe DiMaggio to sign two shipments of baseball jerseys, which Romolt intended to then sell at a profit. The first shipment arrived back from the retired athlete in good shape, but the signatures on the jerseys in the second shipment had bled, making them virtually worthless. When Romolt’s insurance company balked at reimbursing him, he consulted a lawyer, who hired Palenik.

The Science: After closely examining a jersey from each shipment, Palenik determined that the inks and fabrics were identical-but the jerseys had been treated with different softening agents. The substance applied to the first jersey, silicone oil, held the ink (left, top), but the jersey whose signature bled had been treated with a fatty acid ester that just happened to be an ideal ink solvent (left, bottom). In a December 2001 trial in which Palenik testified, Romolt was awarded $1.75 million in damages.

THE CASE OF THE POSSIBLE SECOND SHOOTER

The Evidence: In 1976 the House Select Committee on Assassinations ordered a reinvestigation of the murder of Martin Luther King Jr. Specks of metal visible in King’s scalp in autopsy photos (left, top) suggested to some that brass from a railing in front of him had ended up on his body. Given the angle from which James Earl Ray shot, he could not have hit the railing. Was there a second gunman?

The Science: Examining a surviving microscope slide under a polarizing microscope, Palenik noted that the metal specks bore marks from the slicing instrument used to prepare them for mounting. That implied they were soft-most probably lead, not brass. Palenik cut through the slide cover, removed a sample, and halved it. First, the low-tech approach: He dissolved half the particle in solution, let it dry, then added potassium iodide. The ensuing reaction produced the yellow hexagonal plates typical of lead iodide (left, bottom). Next Palenik microprobed the other half with an X-ray spectroscopy detector, which provides elemental analyses. The result: lead again. The metal in King’s scalp came from a bullet, not the railing, Palenik concluded. There was no second gunman.

THE CASE OF THE SPRAY PAINT SPHERES

The Evidence: About a decade ago, Brooker T. Hillery, a California man serving a life sentence for the murder of a 16-year-old girl in the 1960s, was granted a retrial. Seeking more substantial evidence than the tire- and footprints upon which Hillery had been convicted, investigators reexamined items belonging to both suspect and victim, and discovered on them tiny green football-shaped spheres. The spheres were apparently droplets of spray paint that had fallen from the cotton liner of Hillery’s car (left, top), clung to him, and rubbed off everywhere he went, but a jury would require absolute proof that they shared a common origin.

The Science: Using a polarized light microscope, Palenik and local investigators confirmed that the spheres were each wrapped around a cotton fiber (left, bottom). Next, electron probe microanalysis revealed a composition of titanium, lead, and iron. Infrared microspectrophotometry showed that the paint base was an alkyd enamel, and the infrared spectrum identified the pigment as Prussian blue. Each sphere, whether from victim or suspect, possessed identical characteristics. Hillery lost his appeal and remained in jail.

THE CASE OF THE ATLANTA CHILD MURDERS

The Evidence: Between 1979 and 1981, more than two dozen Atlanta children were murdered. Olive-green carpet fibers were found on most of the bodies. In June 1981 Wayne Williams, 23, was charged with two of the crimes (evidence from 10 others was ultimately introduced at his trial). Comparable fibers had been found in his home and cars he used. But the defense insisted the fibers were run-of-the-mill.

The Science: Viewed in cross section, the fibers had three lobes. Fibers of this type were a well-known DuPont innovation that gave carpeting desirable “soil-hiding properties.” But instead of three equal lobes, these fibers had two fat lobes and a skinny one (left). Research revealed that they were made by Wellman, a small South Carolina polyester producer that had circumvented DuPont’s patent by slightly modifying the fibers’ shape. Wellman officials testified that only a small amount of that carpet had been sold in Georgia. The jury thus deemed the probability of the fibers being coincidentally linked to each victim and to Williams highly unlikely. Williams is serving two life sentences. 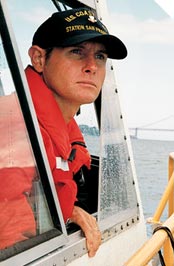 Coxswain Chuck Ashmore keeps an eye out for trouble on San Francisco Bay.