The Future of Research and Regulation for Infertility Treatments 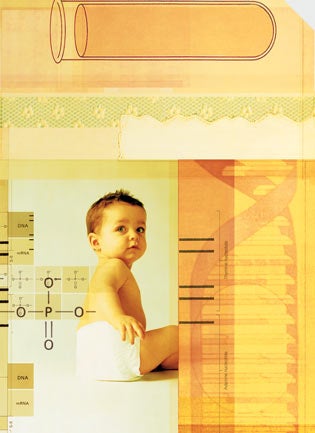 In our March feature story, Sally Has 2 Mommies + 1 Daddy, life sciences associate editor Rebecca Skloot noted that each year, thousands of women expose themselves and their future children to fertility treatments . Yet most of these treatments have not been tested for safety, and are not subject to regulation. These technologies–like in vitro fertilization (IVF) and the method used for injecting sperm into eggs–have now been connected to a risk of serious birth defects. Though the evidence is far from complete, in the last year, at least 12 studies and articles had appeared in peer-reviewed journals suggesting a potential link between assisted reproductive technologies (ART) and problems like heart defects and genetic disorders, childhood cancer, decreased cognition and more. The government has made little movement toward overseeing ART, but Johns Hopkins University recently established the Genetics as part of their Berman Bioethics Institute, with support from the Pew Charitable Trust. This center–the first of its kind in this country–is positioned to become an ART watchdog with hopes of ensuring the safety of fertility treatments and the health of the children they produce. Recently, Pop Sci talked with Kathy Hudson, director of the new institute, about the Center’s goals for the future and the future of ART.

Popular Science: Is it true that ART isn’t regulated?

Kathy Hudson: If ART is a big sphere, there are points on that sphere that the existing regulatory system touches, but that sphere isn’t enveloped by a coherent whole regulatory framework. It’s easy to say, oh, ART is unregulated, it’s the wild wild west out there, and that is (a) not true, and (b) it’s a really bad starting point if you want to have a productive dialogue. I’ve been involved in I-can’t-tell-you-how-many discussions where the first thing out of somebody’s mouth is “You guys are cowboys!” Then you can just see the reproductive practitioners just getting ready to explode as their blood pressure levels rise.

PS: So how is ART regulated?

KH: Well, there are a couple regulatory mechanisms that affect ART. In the beginning, you’ve got an infertile woman and you inject drugs into her to increase ovulation. Those drugs are all regulated by the Food and Drug Administration.

PS: Are those drugs safe?

KH: Scientifically there are some unanswered questions about the long term consequences those drugs might have on women. There are questions about whether they lead to the production of unhealthy eggs, and whether they pose a cancer risk to the mother. That’s an area that we’d the Center hopes to examine.

PS: What about treatments other than drugs–are they regulated?

KH: Adding sperm and eggs together in any way is not regulated. The procedure most commonly used is intercytoplasmic sperm injection (ICSI), which is injecting a single sperm into a single egg. That procedure, to my knowledge, does not fall under any regulatory system. So ICSI’s sort of sitting out there not being regulated.

PS: So is no one overseeing ART?

KH: Not necessarily. If the work is being done at an institution that receives a lot of federal funds, then that research must follow human subject regulations. So, for example, at infertility clinics in major universities like Cornell, experimental ART procedures go through Institutional Review Boards.

PS: But IVF and ICSI and other common practices are standard practice now. Are they considered experimental?

PS: Despite questions about ART’s safety, there seems to be a lot of pressure coming from patients to move forward with research without regulations.

KH: Absolutely. And a number of practitioners and researchers in this field have said, Hey listen, you may say that we need more data, but meanwhile, people are longing for a healthy child. Their biological clocks are going off.

PS: We interviewed a lot of infertile people for this story. None of them knew studies had shown a connection between ART and birth defects. How is that possible? What happened to informed consent?

KH: It’s hard to generate a consent form that adequately represents the risks involved given the huge amount of unknowns surrounding those risks. Some might say there’s a disincentive for highlighting the risks, because it might mean fewer would use ART.

PS: Do you think informing patients of this risk would change their decision?

KH: It’s hard to say. There’s data showing that when people are so single-mindedly focused on a goal — in this case having a child — risk information doesn’t sink in.

PS: What needs to be done to understand the risks ART might have?

KH: There is an enormous and really tragic paucity of data about the outcomes of ART. There needs to be follow up done to see what effects these procedures have, and who’s going to fund this kind of work is a big question. This work is expensive, and for the feds it’s scary and not high on their list of things to support, because it gets dangerously close to research on embryos.

PS: Yet there’s such a huge debate over cloning, which raises similar issues.

KH: Right. There’s an irony here that I just keep finding myself stumped over. Over the last several years, any number of groups have spent a lot of time and attention trying to figure out where they are on cloning, then advocating that position. But even in your wildest dreams, how widespread will reproductive cloning ever be? Is it going to be a real reproductive choice for my nine year-old when he decides that he’s ready to build a family? Meanwhile, back at the ranch, we’ve got ARTs that are here and now. While any number of erudite bodies have sat around meeting tables talking about the necessity for broad public discussion about ART, there really has not been any. So that’s one of our primary objectives.

PS: How does the Center hope to affect research and regulation?

KH: The natural progression of research is to do things in cell culture or animal models to look at safety issues and whether they’re effective. Then, after you have a lot of animal data, you move into humans. Well that hasn’t happened with ART. We’re hoping to determine what research is needed to make the translation from research to clinical practice safely. Aside from this work and policy recommendations, our goal is to create recourses for the public and policy makers. We’ve created a website, www.dnapolicy.org, as an information resource, because until now, information on this issue — including scientific, theological, ethical, and regulatory information — has not been accessible in one place.

PS: What’s the best case scenario for ART’s future? What would you like to see happen next?

KH: It’s too early in our data collection and analysis to be able to say for sure. But I think it is really clear that follow-up studies absolutely must be done to learn what the long-term effects of ART are.