Strategies for a Changing Planet: Farming

Wheat, rice and corn provide 60 percent of the world's calories -- here's how to prepare them for the future 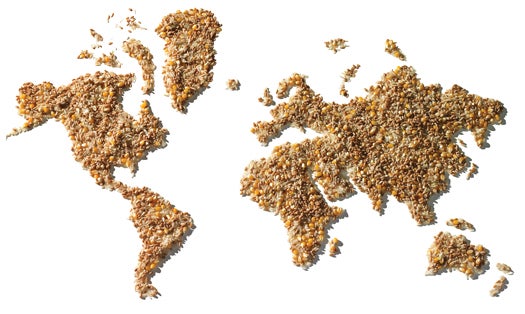 The biggest challenge in preparing crops for climate change is knowing what to prepare them for. Even within agricultural regions, the effects of global warming will vary.

Consider Kansas, the source of a fifth of America’s wheat. Parts of eastern Kansas are now 20 percent wetter than they were in 1900. Rainfall in western Kansas remains largely unchanged, and the region could become much drier over the next century. Meanwhile, short-term fluctuations are becoming more extreme. Last year, despite the long-term increase in rainfall in the area, the state placed every county in southeast Kansas under drought warning or drought emergency.

Stephen Jones, a professor of crop and soil sciences at Washington State University, says it’s possible to stabilize wheat yields against an increasingly capricious climate by developing new wheat strains—each one adapted to a specific hardship—and then planting as many of those varieties as possible. Jones searches for drought-, disease- and flood-tolerant wheat strains that were grown in Washington a century ago (and which fell out of favor because they didn’t consistently produce large yields) and breeds them with modern, high-yield varieties. Farmers sow the resulting seeds and, at the end of the season, collect the seeds from the best-performing plants to use for next year’s crop. In as little as eight years, this process creates new wheat strains. And in a 2010 test in Washington’s Douglas County, one of these new wheat strains outperformed all 59 competitors, including entries from genetic-engineering giants Monsanto and Syngenta.

As carbon dioxide concentrations rise, so will rice yields—but the weeds that grow alongside rice plants, competing with them for water and nutrients, will grow ever faster, threatening the long-term sustainability of rice farming. The good news, says Lewis Ziska, a plant physiologist with the U.S. Department of Agriculture, is that those weeds are so closely related to rice that breeding them together could yield new strains of rice tailored to a carbon-rich atmosphere.

Ziska’s group begins by studying weeds, looking for characteristics that are correlated with their ability to process CO2 so efficiently. Next, they work with researchers at Cornell University to identify the genetic markers associated with those traits. The researchers will then breed weeds that carry those desirable genetic markers with modern, high-yield rice, producing strains of rice that can outcompete weeds as CO2 levels rise.

Ziska can identify the traits he needs and carry out the necessary genetic screening in as little as 18 months, but the full plant-development process—which includes studying real-world variables ranging from the ideal spacing between rows to the insect-sensitivity of these new rice varieties—could take another 5 to 10 years. Eventually, Ziska says, a concerted effort to cross weeds with modern rice could increase yields by 20 to 40 percent.

Large yields and high calorie content have made corn the most popular and most heavily subsidized crop in America. That’s an increasingly urgent problem. In 2010, corn production consumed nine million tons of fertilizer and led to greenhouse-gas emissions equivalent to 42 million tons of CO2—and corn isn’t even something we can easily eat. “The digestibility of unprocessed corn to humans isn’t very high,” says Jerry Hatfield, a plant physiologist with the USDA. “We have to put it through processing of some sort, whether that happens in a factory or an animal.” Set those problems aside, and a deal-breaker remains: modern corn is more sensitive to heat than any other major crop, and attempts to create drought- and heat-resistant corn through genetic modification are still unproven. A recent study found that a 3.6°F increase in global temperatures could make corn prices twice as volatile.

All of which is why many experts advocate replacing corn with a portfolio of hardier, more nutritious and more efficient food sources. Wheat production generates less than half the fossil-fuel emissions of corn and returns 63 percent more protein. Other crops actually give back to the land. Chickpeas and peanuts contain twice as much protein as corn, and they increase the nutrient content of soil.

Maggie Koerth-Baker is the author of Before the Lights Go Out: Conquering the Energy Crisis Before It Conquers Us.