An offering of children and llamas 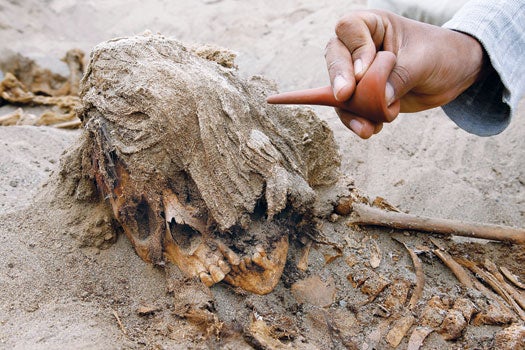 Last August in Huanchaquito, a town on the arid northern coast of Peru, the winter winds uncovered six human skulls. A villager alerted Yale University archaeologist Oscar Gabriel Prieto Burmester to the find, and soon thereafter Burmester and his team had unearthed the ancient remains of 43 children and 76 llamas, and not a single adult—a sacrificial site. Preserved by the area’s dry climate, the 900-year-old mummies date to the age of the pre-Columbian Chimú culture.

The bodies, which lay facing the coast, rested in a single sediment layer, suggesting that they were killed as a group as an offering to an ocean deity, Burmester says, perhaps as an attempt to control the weather. A thick layer of sediment surrounding the mummies indicates that it rained violently right before or during the slaughter. For the sacrifice, the Chimú people offered the best they had. Children represented fertility and renewal, Burmester says, and llamas provided food, clothing and transportation. The now-excavated mummies await further study in a museum in the nearby city of Chan Chan.