The Future of The Body: The Soundtrack

Download five free original songs inspired by this issue, then burn them to a CD and cut out the CD-case cover art below 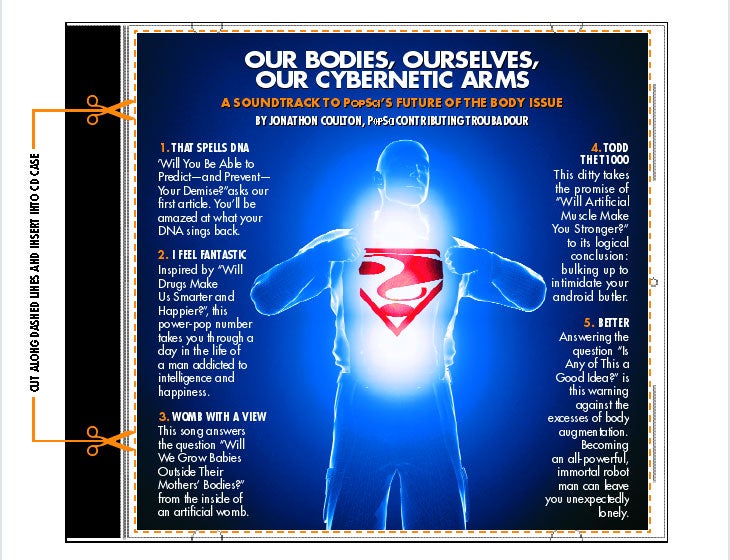 Last February, PopSci added a new name to its list of contributors: Jonathan Coulton, Contributing Troubadour. So who is this guy, and what is he doing to earn that unique title? With Our Bodies, Ourselves, Our Cybernetic Arms, we are pleased to provide the answers to both of those questions, and many more.

It has long been a maxim that science is best explained in song (Nikola Tesla, you will recall, had a great music-hall hit with his “Principles of Alternating Current” and was himself a whiz on the zither). But sadly, the troubadour position lay fallow at these offices until we spied a young, bearded tunesmith named Coulton bringing a conference of futurists to their feet with his heart-wrenching songs about cyborgs.

And so PopSci hatched an ambitious plan, commissioning Coulton to write and record a soundtrack for this
special Future of the Body issue. Each of the five songs he has crafted accompanies a feature article in this issue and, using clever lyrics, catchy hooks and secret harmonic frequencies, unlocks powerful regions of your brain not normally used in the reading of magazines. We trust that you will enjoy these musical digressions, and that someday in the not-so-distant future you will be able to experience them via direct thought transmission to your brainport. But for now, we still need Jonathan Coulton to sing the body futuristic, and so do you.

Our Bodies, Ourselves, Our Cybernetic Arms
A soundtrack to PopSci’s future of the body issue
By Jonathan Coulton, PopSci Contributing Troubadour

1. That Spells DNA
“Will You Be Able to Predict-and Prevent-Your Demise?” asks our first article. You’ll be amazed at what your DNA sings back.

2. I Feel Fantastic
Inspired by “Will Drugs Make Us Smarter and Happier?”, this power-pop number takes you through a day in the life of a man addicted to intelligence and happiness.

3. Womb with a View
This song answers the question “Will We Grow Babies Outside Their Mothers’ Bodies?” from the inside of an artificial womb.

4. Todd the T1000
This ditty takes the promise of “Will Artificial Muscle Make You Stronger?” to its logical conclusion: bulking up to intimidate your android butler.

5. Better
Answering the question “Is Any of This a Good Idea?” is this warning against the excesses of body augmentation. Becoming an all-powerful, immortal robot man can leave you unexpectedly lonely.