Video: How to Build a Dinosaur from a Chicken

How does one build a dinosaur? There’s the much-celebrated Crichton/Spielberg method, in which you extract dino DNA from a preserved... 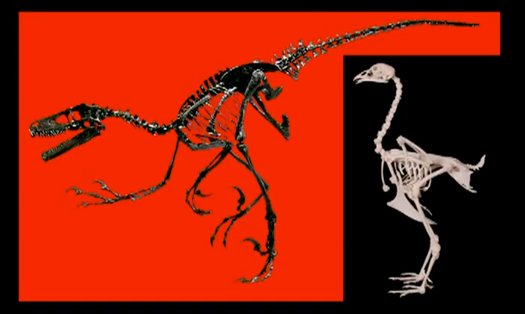 How does one build a dinosaur? There’s the much-celebrated Crichton/Spielberg method, in which you extract dino DNA from a preserved prehistoric mosquito. But there are problems with this approach, says paleontologist Jack Horner in a recent TED Talk, and besides: there are plenty of spare dinosaur parts laying around our modern world from which to build a dinosaur. We just need to find the right ones.

Horner has spent a career digging up some of the best-preserved biological artifacts leftover from the dinosaurs’ tenure on this planet, but in none of them, not even the soft tissues like preserved blood vessels, could he or his team find intact DNA–the kind you need to clone a dinosaur a la Jurassic Park. So he and some colleagues are looking for dino-era DNA in dinosaurs’ descendants: modern birds.

Chickens, Horner says, have the keys to building a dinosaur etched into their genomes. Things like teeth, claws, and tails are still expressed in embryonic chickens, but are all turned off at some point during embryonic development by genes that evolution has made ubiquitous in modern birds. By turning these genes off, we’ve already engineered chickens expressing teeth, and by turning off still more we might resurrect more of the dinosaur’s prehistoric traits, no mosquito mining necessary.

Horner tells the story better than we do, hear him explain it in the video below.