After Years of Herbicide Use, Roundup-Resistant Superweeds Are Evolving to Invade U.S. Fields

U.S. farmers are dealing with a superweed epidemic, and it’s not as groovy as it sounds on first read. Ubiquitous... 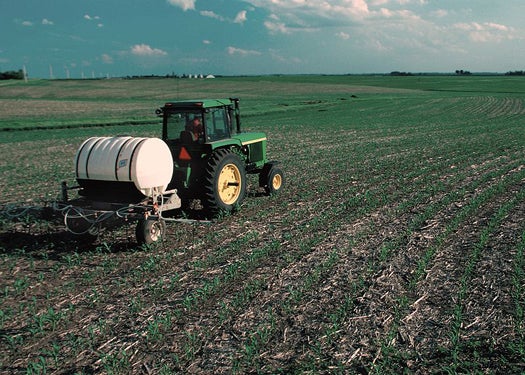 U.S. farmers are dealing with a superweed epidemic, and it’s not as groovy as it sounds on first read. Ubiquitous use of the weed killer Roundup over time has spawned herbicide-resistant superweeds , much as heavy use of antibiotics over past decades has bred drug-resistant germs and bacteria.

Roundup — which was created by Monsanto but is now sold generically under the common name glyphosate — has been a boon for agriculture over the last 20 years. Genetically modified crops are immune to its poison, meaning farmers can spray down their entire fields with the stuff, killing off invasive weeds while leaving their harvests in perfect order. It degrades quickly, and cuts down on erosion, agricultural fuel cost, and carbon emissions because farmers don’t have to plow their fields under each season.

At least, they didn’t have to until now. The first glyphosate-resistant species was identified a decade ago, but that resistance is now shared by at least 10 species in 22 states, affecting between 7 million and 10 million acres of land predominantly hosting soybeans, cotton and corn. Farmers battling with resistant strains of horseweed, pigweed and ragweed are having to turn to stronger herbicides, plowing and pulling weeds by hand, methods that could lead to increased environmental harm, lower yields, and rising prices. Andrew Wargo III, president of the Arkansas Association of Conservation Districts, told the Times, “It is the single largest threat to production agriculture that we have ever seen.”

The situation closely mirrors the overuse of anti-malarial drugs in the middle of the last century; such overuse caused the strongest, drug-resistant strains to proliferate through a sped-up version of natural selection, rendering the drugs ineffective. A similar case is the epidemic of wheat stem rust that researchers around the world are battling to contain now that the genetic safeguards crop engineers embedded in the wheat genome decades ago are failing against a newer, hardier strain of the devastating disease.

Roundup Ready crops account for some 90 percent of soybeans in the U.S., as well as 70 percent of the corn and cotton. Such overwhelming use of a single safeguard creates a ripe situation for evolution to get the upper hand, and that appears to be exactly what’s happening.

In the long run, Roundup resistance could lead to reduced interest in genetically modified crops; if the weed killer no longer kills the weeds, there’s little point in paying a premium for poison-resistant crops. But hopefully we’ll also learn something from it as well: Life on this planet is predisposed toward diversity, and when we institute widespread uniformity on diverse systems we tend to find that nature wins out in the end.