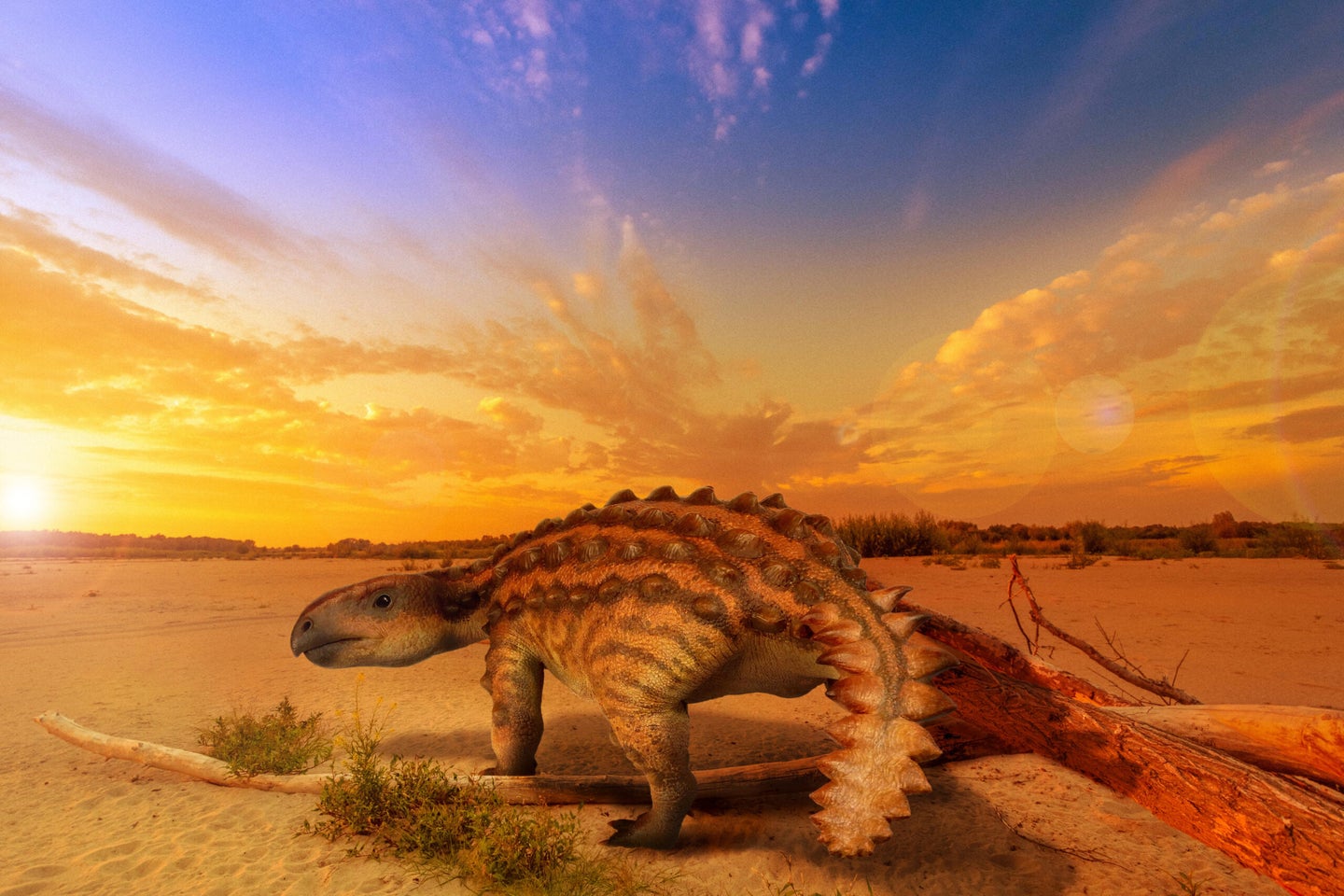 A new species of armored dinosaur from subantarctic Chile boasted a large tail weapon that looked dramatically different from those found on its relatives, and may shed light on a mysterious phase in the group’s evolution.

Scientists found the mostly-complete skeleton in 2018 in the Río de las Chinas Valley of Chilean Patagonia and determined it to be roughly 71.7 to 74.9 million years old, dating it to the late Cretaceous. When they further examined the skeleton, the researchers found a baffling mixture of features typically seen in ankylosaurs and stegosaurs. However, its “bizarre” tail didn’t seem to match with the tails seen in either of these famous groups; rather than the traditional spikes or clubs, the newly-named Stegouros elengassen had seven pairs of bony deposits encasing half the tail in a flattened frond-like structure, the researchers reported on December 1 in Nature.

Still, an analysis of the armored dinosaur family tree revealed that the fossil belonged to an ankylosaur, suggesting that different branches of the group flourished in the northern and southern hemispheres after the supercontinent Pangaea broke up.

“This is the first time scientists get a good look at what a South American ankylosaur is like,” says Alexander Vargas, a paleontologist at the University of Chile in Santiago and coauthor of the study. Stegouros’s tail weapon, he adds, is “absolutely unlike anything we have seen before.”

A number of present-day mammals and reptiles, including porcupines and alligators, use their tails as whips or lashes to defend themselves from predators or rivals. But southern African girdled lizards go a step farther: Their tails are equipped with bony spines. More elaborate versions of these tail armaments were once wielded by extinct relatives of turtles and armadillos.

“But the champions of them all are the armored dinosaurs,” Vargas says. In addition to the bony plates and spines along their backs, some members of this group developed specialized tail weapons. These included the tail spikes seen in stegosaurs such as Stegosaurus and rounded tail clubs belonging to ankylosaurs such as Ankylosaurus.

The ankylosaurs generally had broad backs and thick limbs. While ankylosaur fossils are plentiful in North America and Asia, Vargas says, until now only fragmented bones and teeth have been found of their more southern cousins.

“These scraps and pieces were often interpreted as a sign that ankylosaurs, which in North America were very abundant and diverse, somehow managed to cross into South America, to migrate,” he says.

The specimen that he and his colleagues discovered in 2018 at the southern tip of South America changes this picture, Vargas says. When the team began to excavate the fossil, they first noticed its slender limbs and speculated that the specimen might have been a bipedal herbivore. Next came the tail with its “astonishing weapon,” Vargas says, which indicated that the skeleton actually represented some kind of armored dinosaur.

“We thought we might have a stegosaur when we uncovered the hips,” he says. “They were identical to a stegosaur.” The fossil’s upper arm and right hand also resembled those of stegosaurs. Yet when the team reached the skull, they found that the upper jaw and palate looked distinctly ankylosaurian.

[Related: An overlooked fossil turned out to be a new herbivorous dinosaur with an oddly shaped nose]

To find out which group the puzzling species belonged to, the researchers analyzed hundreds of different traits from dozens of dinosaur species and ultimately identified ​​Stegouros as an ankylosaur. What’s more, its ancestors split off from the rest of the ankylosaurs some 167 million years ago in the mid-Jurassic.

“It’s an evolutionary link between the ankylosaurs…and other armored dinosaurs like the stegosaurs,” Vargas says.

This could explain why Stegouros bears so little resemblance to most ankylosaurs, with its agile limbs, narrow feet, light armor, and a hawk-like beak. The petite ankylosaur was only about 2 meters (6.6 feet) long and had a shorter tail than other armored dinosaurs. The weapon’s flattened shape might have made it easier for Stegouros to avoid dragging its tail and “being able to wield it for defense,” Vargas says. He and his colleagues named the structure after an Aztec war club, or macuahuitl, which resembles a wooden sword with obsidian blades protruding from either side.

The researchers determined that Stegouros is closely related to two other ankylosaurs from Australia and Antarctica. The latter, which is known as Antarctopelta, features “enigmatic” bony plates that have perplexed scientists but which might be part of the same kind of macuahuitl used by Stegouros, Vargas says.

The findings suggest that Stegouros “is not an invader from the north,” he says. “It is actually a lineage that has roots so deep in time it’s [from] when all continents were together.”

As Pangaea finished separating into Laurasia (present-day North America and Eurasia) and Gondwana (which would become South America and the remaining continents) in the late Jurassic, the more familiar ankylosaurs would come to dominate the northern continent while Stegouros and its relatives laid claim to the south.

For their analysis, Vargas and his team only described a single Stegouros specimen. They plan to search for more complete skulls in the future that can be compared with those of the ankylosaurs from Antarctica and Australia. The findings also emphasize how little is still known about the evolutionary history of armored dinosaurs in the southern hemisphere, the researchers concluded.

“You can expect more surprises from the south,” Vargas says.