Robotic Jellyfish On The Move 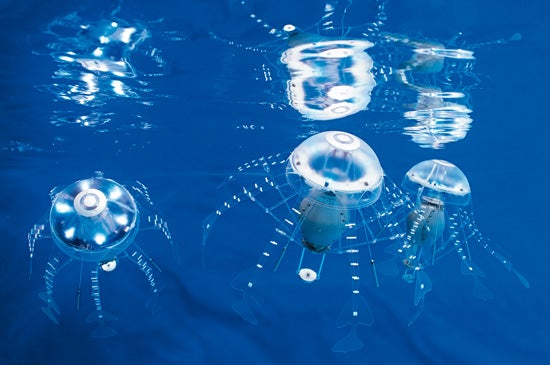 At a conference in Germany, engineers unveiled a robotic jellyfish designed to swim–but not sting–like the real thing.

The AquaJelly runs on rechargeable lithium-ion batteries, has a roughly spherical body and uses eight tentacles to get around in the water. The tentacles undulate like the tail of a real fish, and small fins at the ends give the machine a little extra push on the water. To steer, the robot shifts its weight, and it drives around its tank autonomously.

Pressure sensors tell the AquaJelly how deep it is in the water within a few millimeters, and light sensors give it an idea of the location of potential obstacles, including other robo-jellies.

Now if we could just outfit them with lasers and get them to fry the jellies that plague so many beaches in the summer, that would be something.