Building Artificial Islands That Rise With the Sea

With an average elevation of just five feet above sea level, the Maldives—a nation comprising 1,192 islands in the Indian... 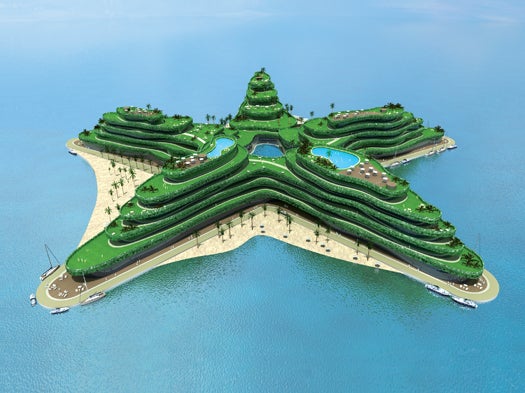 With an average elevation of just five feet above sea level, the Maldives—a nation comprising 1,192 islands in the Indian Ocean—is the lowest country in the world. Sea level, meanwhile, has risen by about seven inches since 1900, and scientists predict that it will rise as much as two more feet by 2100, pushing much of the population (about 390,000 and growing) out of their homes. In the past, engineers have used sand and rubble to create islands elsewhere, but these structures can disturb the sea and seafloor ecosystems.

The Maldivian government has started a joint venture with the architectural firm Dutch Docklands International to build the world’s largest artificial floating-island project, which will stay above water no matter how many glaciers melt. In the Netherlands, the company has already built floating islands for prisons and housing from slabs of concrete and polystyrene foam. For the Maldives, it will anchor similar structures to the seabed using cables or telescopic mooring piles, making landforms that are stable even in storms. The design disturbs only a small patch of the seafloor while preserving natural currents. And many smaller islands are more ecologically sound than one large one because they cast smaller shadows on the water, minimizing the impact on sea life. Although the company is starting to build an island for 200 luxury residences and another for a floating golf course this year, it is working on plans to construct islands for more affordable housing next.