Welcome to the 'megadrought' 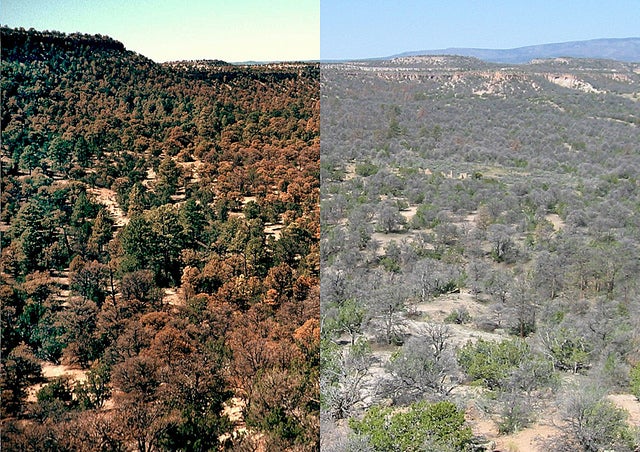 An analysis of past climate data published yesterday in the journal Nature Geoscience paints a less-than-rosy picture for the U.S., Mexico, and Canada in the 21st century. The 2000-2004 dry spell was the worst drought in the region in 800 years, the researchers claim, and before the century is over we’ll look back on those days as the wetter end of a much larger hydroclimate shift. Dry conditions will become the “new normal.” They invoked the word “megadrought.”

The research, presented by ten researchers from several North American universities and supported by the likes of NASA, the National Science Foundation, the Department of Energy, and other institutions, doesn’t make a call on whether the ongoing drought in the Midwest is tied to the same forces that fueled the 2000-2004 drought. But it does state that the climate extremes we experienced at the beginning of the last decade were exacerbated by global warming, and they have set the stage for further extremes in the future.

This is because the 2000-2004 drought was extreme enough to cause a lasting impact on crops, forests, and water tables across the American west. The aggregate result of all this is a reduction in the ecosystem’s ability to sequester carbon. In fact, as vegetation withers away, more carbon is released into the atmosphere even as the region’s natural ability to act as a carbon sink diminishes (by an average of 51 percent across the Western U.S., Canada, and Mexico). In other words, it’s a vicious cycle of warming, withering, and further warming.

According to tree ring data, the last two droughts of this magnitude in the North American West occurred in the 10th and 12th centuries, and the impact won’t soon be forgotten. According to climate models, the situation is likely to worsen, with 80 of the 95 years from 2006 to 2100 experiencing precipitation levels equal to or lower than than the 2000-2004 drought levels.