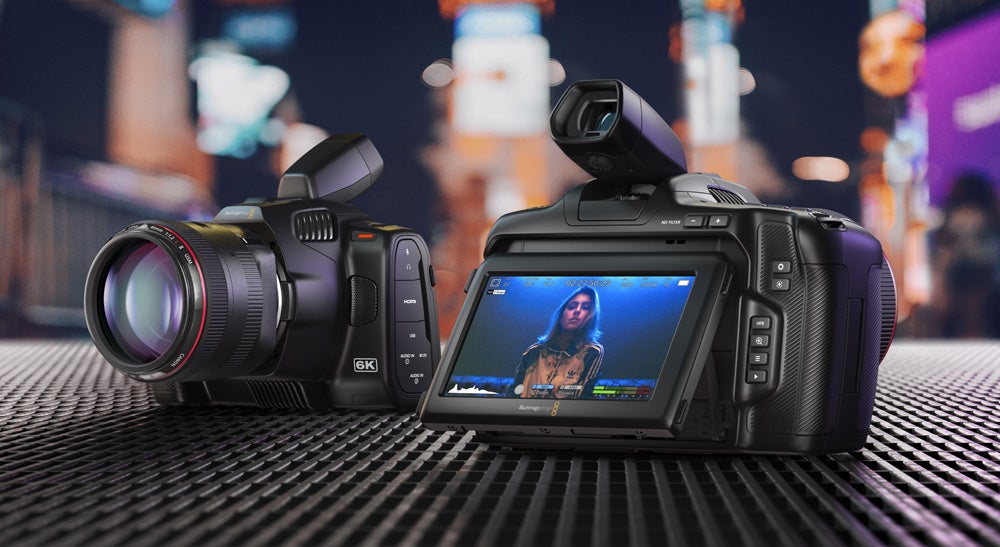 The angled viewfinder is an available add-on to make the camera feel more like a DSLR-style mirrorless camera. Blackmagic Design
SHARE

By now, you’ve seen cameras—even those attached to smartphones—with specs boasting the ability to shoot 8K footage. It’s an impressive number and it looks great on marketing material, and it does comes in handy for some specific purposes. But for many pro and high-end shooters, it’s still overkill.

This week, Blackmagic Design introduced a new model in its Pocket Cinema Camera, the 6K Pro. Like the rest of its siblings, the 6K Pro utilizes Black Magic’s slightly odd-looking body design with a Super 35mm sensor inside and a Canon EF mount (its autofocus DSLR lenses) on the front.

The back of the camera, however, is where you’ll find the biggest upgrade, at least from a usability standpoint. The new 6K Pro now has a five-inch tilting HDR touchscreen display with a 1920 x 1080 resolution. It also puts out 1,500 nits of brightness, which is enough illumination that it should be easy to see even in bright surroundings. For reference, the iPhone 12 Pro maxes out around 1,200 nits on its brightest HDR setting.

Inside, Blackmagic has equipped the 6K Pro with the same color processing tech found in its IMAX-worthy (and 2020 Best of What’s New award-winning) URSA Mini Pro 12K. The extra resolution allows for oversampled 4K footage, which pulls in more details than native 4K. That can come in handy later for editing and color grading.

In addition to the sensor itself, the 6K Pro includes motorized neutral density filters that can block two, four, or six stops of light coming into the camera. If you’re a still shooter, this may not sound very handy, but it’s extremely useful for video. Shooting with shutter speeds that are too short can make video look jittery, which can be cool for John Wick-style action sequences, but doesn’t really work in many other instances. By reducing the amount of light hitting the sensor, neutral density filters allow shooters to shoot at slower shutter speeds and wider apertures, even in bright settings.

For power, the 6K Pro draws on Sony’s NP-F570 batteries, which are extremely common and portable between different devices in the cinema world. Adding the optional grip ups the capacity to two batteries for extra-long recording sessions. The previous models utilized the common Canon EP-L6 cells, which aren’t as versatile and don’t provide the same kind of battery life.

While the 6K Pro’s body is built to fit easily into a cinema rig, Blackmagic also sells a removable electronic viewfinder that sits on top of the camera to give it a more DSLR-like form factor. It comes with four interchangeable eye-pieces depending on what the shooter feels most comfortable with. The finder tilts upward, which makes it look and feel similar to the modular EVF found on the original Fujifilm GFX medium format camera.

For all that firepower, Blackmagic is asking $2,495 for the camera body, plus $495 if you want the additional viewfinder. The grip will cost $145.