There are always new ways to keep a smarter home. 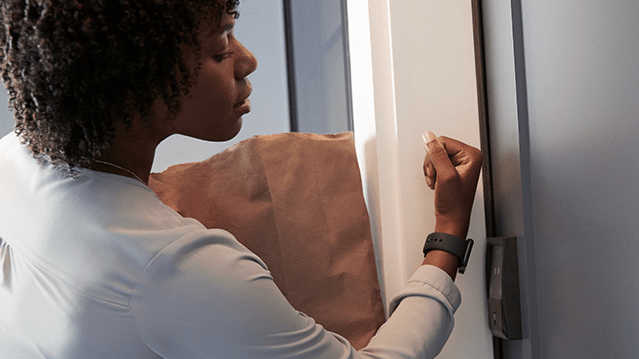 Every facet of every thing that you do is getting “smarter.” Every year, the Consumer Electronics Show is full of smart home gadgets designed to make the basics tenets of everyday life at home a little more convenient through technology. Some of these concepts are well-known, like smart light bulbs and doorbells. Others, like “robot butlers,” are a little more forward thinking. Here’s our short list of all the cool smart home gadgets and upgrades we’ve noticed coming out of CES 2022.

Smart locks and smart doorbells are a known commodity in 2022, so now Masonite is simply making the whole smart door. The Masonite M-Pwr integrates a Yale smart lock, a Ring video doorbell, and a variety of sensors into the powered fiberglass door. For now, the M-Pwr is only available for contractors building new homes, so it isn’t something you can just buy, but it is an interesting step in the move towards integrating smart home tech into houses, rather than bolting it in on after the fact.

Meanwhile, there are also interesting things happening in more well-established worlds of discrete smart locks and doorbells. Schlage’s new Encode Plus lock will be the first to support Apple’s Home Key feature in iOS 15, which lets iPhones and Apple Watches open door locks. (Hyatt already uses the feature to let you open hotel rooms.) The Encode Plus can open the door automatically when it’s in range, but you can add Face ID, Touch ID, or a password to provide additional protection.

On the smart doorbell front, the Eufy Security Video Doorbell Dual takes aim at package theft with a two-camera system. It features a 2K forward-facing camera that replaces your doorbell, and a second 1080p camera pointed down towards the ground in front of the door to keep an eye on your packages. At $259.99, it’s more expensive than Eufy’s other doorbells. Then again, it also comes with two cameras.

Singing in the shower is a time-honored tradition and I didn’t realize we needed to disrupt it, but this is CES so here we are. The Icon.AI Sound Mirror is effectively an “acoustic mirror,” A.K.A. a large round or oval mirror with an Alexa-based smart speaker in it. With an IPX6 water-resistance rating, I think of it as a bathroom mirror, but it can really go anywhere. When connected to Wi-Fi, you can ask it to play music, read the news, and do all the things that Alexa does. It also can connect to your phone directly via Bluetooth so you can get your audio from any app.

Sometimes the most interesting smart home gear is the least flashy. Kohler’s H2Wise, for example, is a water sensor you attach to your plumbing to monitor it for leaks. It can also let you know when the pressure is dangerously high, like when they’re about to freeze. In addition to the $400 self-installed version, there’s a H2Wise+ model that can shut off your water main when it detects a problem. Kohler recommends getting a professional to install that one since it’s a little more involved.

Smart light bulb company Sengled has a new smart light bulb that can detect your heart rate, body temperature, and, using AI, monitor your sleep just like a fitness tracker. According to Gizmodo, the Smart Health Monitoring Bulbs use a form of radar called Frequency-Modulated Continuous Wave to track your biometrics. With multiple bulbs installed, you can also use them to gather data about movement around the home. The BlueTooth/Wi-Fi bulbs are relatively universal, by smart home standards, syncing up with Alexa, Google, and Apple HomeKit smart home standards.

After Amazon announced the Astro last year, I finally accepted that the robots were coming to invade our homes. At CES 2022, I am comforted to know that there’s at least one robot that’s more focused on helping than being a flashy tech boondoggle. The Labrador Retriever is literally an AI-enabled, self-driving shelf on wheels that drives around your home in preset intervals. The Retriever, the more expensive of two Labrador robots, can also pick up a tray from a specialized base, allowing it to pick up and carry things from one room to another. While there’s utility for everyone in that, Labrador clearly sees its robots as an aid for people with mobility issues who may need help carrying things around the home.

Labrador’s two robots, Caddie and Retriever, are currently in an early testing phase. According to The Verge, the company hopes to enter production in 2023. You can reserve one now, but it’s a very pricey proposition so I’d recommend waiting until we see more.