Whether you’re creating or consuming content, the Beyerdynamic PRO X headphones let you balance your mix as you up your level(s). 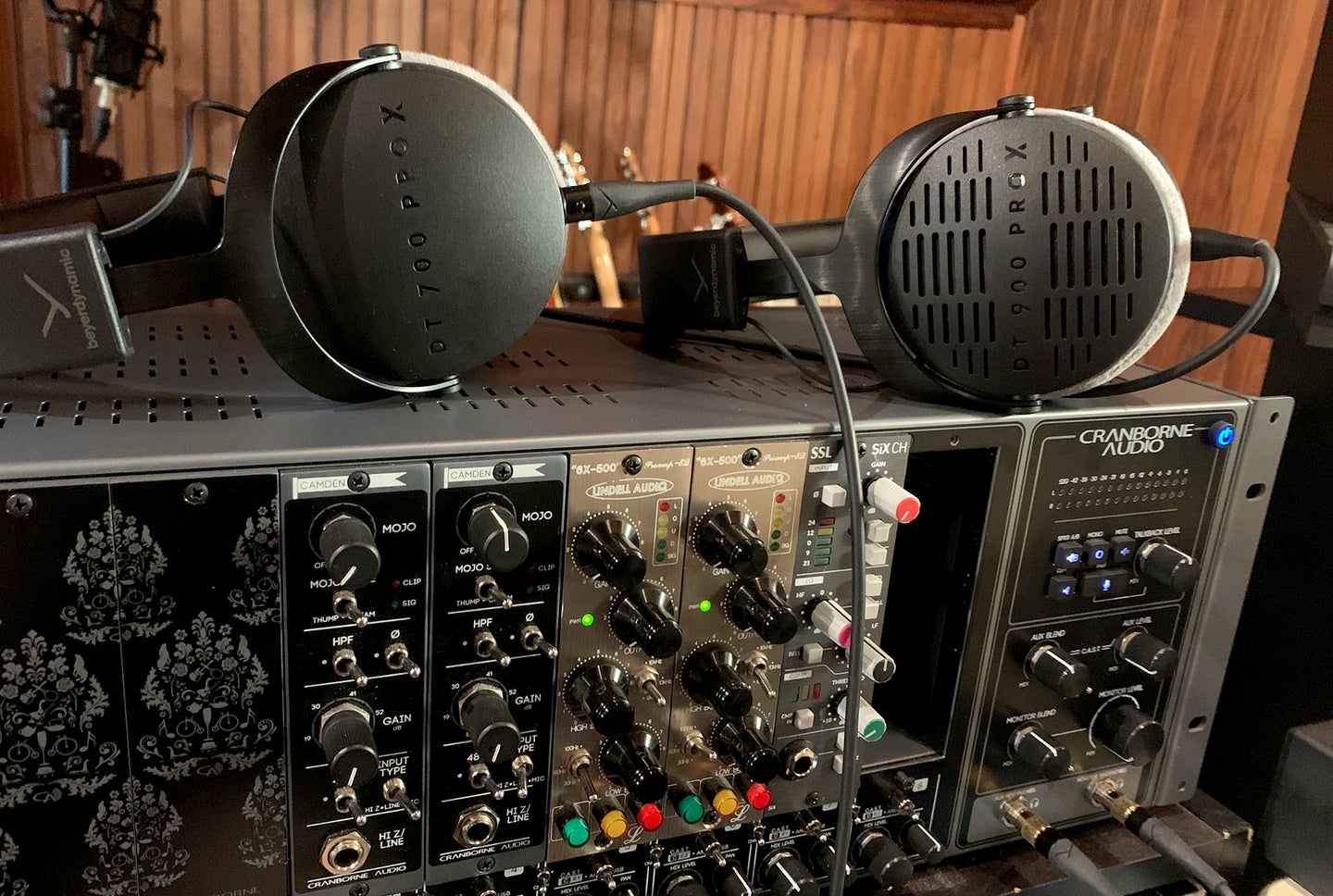 The German manufacturer Beyerdynamic has a long reputation for making some of the best studio headphones. While the Heilbronn-based company has been around since 1924, Beyerdynamic headphones really became embedded in studios starting in the mid-1980s with the DT 770 PRO and DT 990 PRO models. In 2016, the DT 1770 PRO and DT 1990 PRO introduced even more exacting, more expensive models in the line, using the company’s 45mm Tesla drivers and positioning them as top-tier monitoring headphones. In 2021, Beyerdynamic released another iteration in their headphones’ lineage with the DT 700 PRO X and DT 900 PRO X. According to the company, they designed the Beyerdynamic PRO X line for the contemporary music maker, who might use them in the studio or to take engineer-level clarity on the go.

(In addition to the PRO X headphones, the company also released a pair of content creator/project studio-focused microphones: the M90 PRO X, a large-diaphragm condenser we enjoyed putting through its paces, and the M70 PRO X, a dynamic we found equally recommendable.)

What are the Beyerdynamic PRO X headphones?

The closed-back DT 700 PRO X and open-back DT 900 PRO X, both wired over-ear headphones, are not meant to replace the existing circumaural PRO models but rather to provide additional choices with different capabilities. They are made-in-Germany, solidly built but user-serviceable headphones that aim to lower impedance while raising playback quality. In layman’s terms, the headphones should demand less power while delivering higher audio levels. So, can the Beyerdynamic PRO X headphones enter the conversation on best mixing headphones? Does X mark the spot? Let’s have a look at what these two models offer.

When you open the box, you’ll find the headphones themselves, two cables, a 1/4-inch adapter, and a nice-looking black cloth carry bag. And, at first glance, the design language of Beyerdynamic headphones is undeniable. Beyerdynamic made a subtle but obvious change to the hole pattern on the semi-open DT 900 PRO X earcups compared to the DT 1990 PRO, but they are clearly siblings with their black, model-embossed exteriors—though the DT 1990 PRO’s matte metal cups exude long-term durability more than the plastic ones of the DT 900 PRO X. And you’d expect that, considering the DT 1990 PRO costs twice as much as the DT 900 PRO X. Conversely, the DT 990, which costs half of what the DT 900 PRO X does, ends up looking less like the others by a wide margin, with its earcup cutouts exposing far more of the internal components and the product name emblazoned on overlaying plastic strips. The PRO X design provides a more modern silhouette.

The most significant factor distinguishing the PRO X headphones from the company’s other professional counterparts, however, is the speakers, developed in-house like those in all of the company’s headphones. Beyerdynamic equipped the PRO X headphones with a new dynamic driver design: the Stellar.45, featuring a neodymium magnet, a three-layer diaphragm with integrated damping, a copper-covered voice coil, and an impedance of 48 ohms.

That impedance spec is significantly lower than most of the models in the PRO series (which are typically 250 ohms outside of a few variants) and allows the PRO X headphones to function well with low-power headphone amps like those in mobile devices and computers, as well as higher power studio amps. That additional flexibility fits with Beyerdynamic’s mission statement for the PRO X line.

Also helping in that regard are the cables for the PRO X headphones, which are detachable, unlike those in the DT 770/990 PRO. The cables connect to the left cup of the headphones with a mini-XLR connector. On the other end is a 3.5mm (1/8-inch) jack with a screw-on 6.3mm (1/4-inch) connector. Having a detachable cable offers several significant advantages. First, you can swap out a bad cable easily. Or, if you need a cable with a different connector going to the sound source, you have that flexibility. Beyerdynamic includes two different length cables with each pair of PRO X headphones: 9.8 foot and 5.9 foot, as well as a screw-on 3.5mm to 6.3mm.

All that said, the Beyerdynamic PRO X headphones are not the most portable on the market. They don’t fold. The earcups don’t swivel far. While they could accompany you on the subway, that’s not the environment the best Beyerdynamic headphones are meant for.

The PRO X headphones not only have a new proprietary driver, but they’re functionally and cosmetically different from the PRO series models. For example, Beyerdynamic changed the headband design rather significantly. Instead of a cushion covering the entire headband, the PRO X models feature a replaceable cushion made of faux leather with memory foam inside.

The headband has a flexible steel core, which you can see when you take off the headband cushion. The purpose of the design is to even out the clamping action—the amount of pressure on your ears—no matter the size of your head.

You can adjust the length of the earcups by pulling and pushing them. Each side has a series of small indentations on the interior of the sleekly curled yoke that Beyerdynamic refers to as “retaining dots,” which the headband mechanism clicks into when you adjust its size. You can see how many dots are visible on each side if you want to confirm that you’ve changed the length evenly.

The ear cushions appear on the outside to be the same as those on most of the PRO series models. They have a velour-like covering with memory foam inside and are impressively soft and comfortable. According to Beyerdynamic, however, they breathe a little bit, keeping heat from building up on the inside. Beyerdynamic cleverly added a little extra space between the cushion and the driver to fit your earlobes more comfortably and keep them from getting folded inside the earcup.

The ear cushions are also replaceable. They snap in and out easily, making cleaning or swapping them out a breeze (they have a new mounting system, however, so can’t be swapped with the pads of other models). The ability to replace the cables, ear cushions, and headband means that you can keep your PRO X series headphones in top shape for many years.

Both the DT 700 PRO X and the DT 900 PRO X have a frequency response of 5Hz to 40,000Hz. That’s a bit wider than the DT 770/990 PRO series, which went from 5Hz to 35,000Hz (and the same as the more luxe DT 1770/1990 PRO models). That extra 5,000Hz does matter, even though it’s way beyond the range of human hearing. The additional frequency headroom allows the headphones to reproduce more accurately within the scope of our hearing.

The company didn’t publish sensitivity specs for these headphones, but the nominal SPL (sound pressure level) for both seems somewhat higher than that of the DT 770 PRO and DT 990 PRO (it’s a little hard to tell for sure because those specs are presented differently for the two series), so the PRO X models likely are able to handle more signal without distortion.

As important as comfort, convenience, and looks are, the most crucial attribute of any pair of headphones for music production is their sound. Fortunately, both the DT 700 PRO X and DT 900 PRO X sound excellent—accurate without being overly analytical.

Let’s start with the former. Closed-back models are the best headphones for recording vocals and other sources. Because of their closed nature, they keep outside sounds from coming in and block the music you’re hearing through them from leaking out. That’s particularly important if you’re recording with a microphone, as you don’t want your monitor mix or click track leaking into the recording.

Through the powerful headphone amp in my Cranborne Audio 500R8 audio interface—which delivers output wattage (1kHz) of 250mW x 2 @ 600 ohms, 650mW x 2 @ 220 ohms, 1.21W x 2 @ 100 ohms, and 500mW x 2 @ 32 ohms—the DT 700 PRO X sounded quite good. Its overall frequency response seemed balanced and put out plenty of bass, although not too much. Bass buildup often muddies other frequency ranges with closed-back headphones, but it seemed under control in the DT 700 PRO X even when listening to hard-hitting lows such as on “Hey Baby (Original Mix) by Meleefresh and Deadmau5. The external noise attenuation and intelligible, open voicing are great whether you want to punch in or block out sounds.

I used the DT 900 PRO X during several sessions in my studio, plugged through the same 500R8 headphone amp, and was impressed. Compared to a closed headphone, the DT 900 PRO X could be said to be cooler both physically and sonically, with the bass tight but not hyped. Midrange separation was impressive and high-end transients were bright but not brittle. While treble emphasis is audible in the 4-8 kHz range, the effect is nowhere near the infamously fatiguing “Mt. Beyer” peak of some older models. It’s resolving rather than razor-sharp and just adds a snappiness to complement the cleanliness of the mids and unbiased impact of those linear lows.

The crispy snare in the Dr. John song “Dis Dat or D’Udda,” the realism of the acoustic kick drum in the Jerry Douglas song “Route Irish,” and the richness of synth bass and reproduction of the kick in the Bassnectar song “All Colors” benefited equally from the uncompressed, unimposing nature of the tuning. Texture and control take precedent over raw power.

I also used both pairs of headphones connected to the headphone jack of my 2019 16-inch MacBook Pro. I didn’t notice any difference in the performance of the DT 700 PRO X and DT 900 PRO X between the laptop and how they sounded through the higher-powered amp of my audio interface. And compared side-by-side with the Beyerdynamic DT 1990 PRO while listening to high-resolution FLACs off of an ASUS ROG Phone 5 Ultimate, the DT 900 PRO X’s efficiency was on full display; even with an ESS Sabre ES9280AC Pro Quad DAC and adaptive Class G amp, the phone struggled to afford the 250-ohm 1990 PRO its full expression. Not so with the DT 900 PRO X, which was fully articulate with a pleasingly speedy but cohesive presence. In an adequately amped vacuum, the DT 1990 PRO is still the last word in surgical precision. But for the producer on the go, the DT 900 PRO X is certainly a cut above. The Stellar.45 drivers lived up to their name.

So, who should buy these Beyerdynamic PRO X headphones?

If you’re looking for an all-around pair of studio headphones, the Beyerdynamic DT 700 PRO X would be an excellent choice. It’s great for tracking and certainly would be useful for mixing, too. If your focus is mixing and mastering, however, the open-back Beyerdynamic DT 900 PRO X would be an even better choice. If mixing is your focus, but you also do tracking, you might consider getting both. Or, if that’s too pricey, go with the slightly more composed DT 900 PRO X and a less-expensive pair for your tracking.

In addition to their excellent sound quality, both of the Beyerdynamic PRO X headphones are expertly designed and—with their many replaceable parts (even the Stellar.45 drivers could be self-serviced, if needed)—should last a long time. If you want to make sure all the elements in your tracks are present but never overpowering, either of these quality studio headphones is an investment in solid performance for years to come.

is a writer and editor specializing in music technology. He’s the Technical Editor-Studio for Mix and the former editor of Electronic Musician. Levine is also a composer and producer who has written music for numerous national commercials and TV networks like CNN, the History Channel, and A&E. A guitarist and multi-instrumentalist, he’s played sessions, concerts, and on Broadway. Visit his music site at michaelwilliamlevine.com and check out more of his writing at mikelevine.journoportfolio.com.