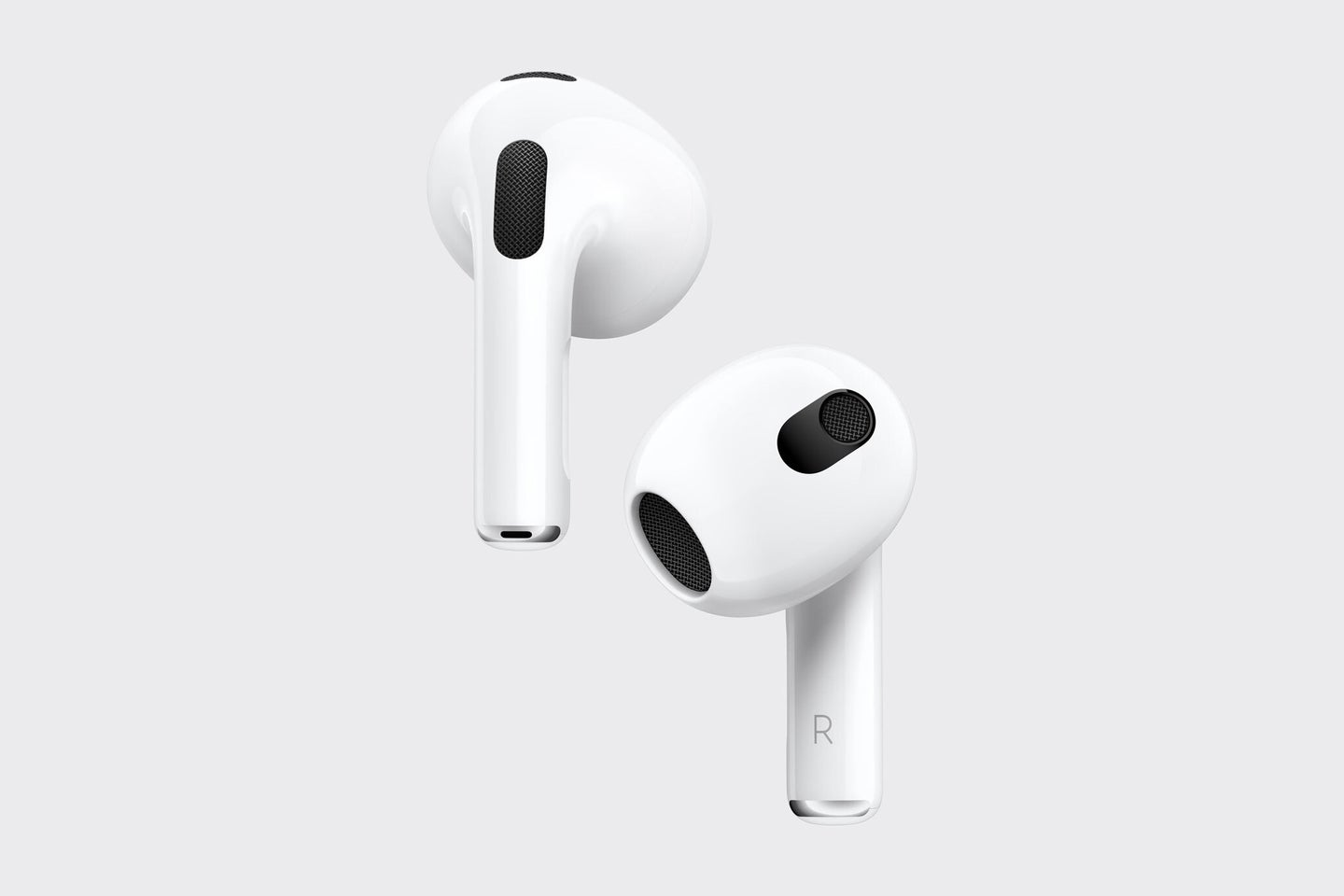 Apple announced that the next generation of AirPods is coming next week, just one of several products revealed as part of its Oct. 18 “Unleashed” event. The AirPods 3, or “third-generation AirPods,” as Apple described them, adds many of the features from the AirPods Pro into the standard AirPods design, including Dolby Atmos spatial audio and a few other upgrades. They’re also a little pricier, narrowing the gap between standard AirPods and the AirPods Pro even further.

The AirPods 3 are getting some substantial audio quality upgrades, most of which come from hand-me-down features introduced in the AirPods Pro. First and foremost, they’ll support Dolby Atmos spatial audio with head tracking, which creates simulated surround sound that can replicate sounds coming from above, below, and all around you. The added gyroscope, a new hardware component added to AirPods 3, follows the movement of your head and ensures that the positions of those virtual speakers move when you turn your head. (That way the speaker on your right always sounds like it’s coming from the right, etc.) AirPods 2 feature spatial audio through Apple Music, but the AirPods 3 expands that functionality to a wider range of content, including Netflix and group FaceTime calls, similar to what you get from the AirPods Pro and AirPods Max.

Also from the AirPods Pro, computational “Adaptive EQ” automatically adjusts the AirPods 3’s audio settings to replicate the sound you’re playing as accurately as possible for your specific ear physiology.

Bigger, better battery life for the ‘Pods and the case

Some of the best improvements to the AirPods 3 are actually related to the case. First and foremost, the AirPods 3 will get up to six hours of battery life on a single charge, up from 5 in its predecessor. They can also get a quick charging burst: A five-minute charge can give you an hour of battery life.

The charging case, at full battery, can recharge the AirPods 3 up to four times before needing to be plugged in, bringing total battery life for the full package up to a respectable 30 hours. The new case also supports MagSafe now, so the charging cable will stick to the case. For a lighter device that can be accidentally knocked around, this will probably be more helpful than you’d expect at a glance.

The AirPods 3 feature a new “contour” design, created to make the standard, tipless earbud more comfortable for all ears. As expected, the ‘buds have shorter stalks, so they look a little less dangly. At the same time, Apple somehow managed to also add the AirPods Pro’s onboard controls. There’s a force sensor on the stalk, allowing you to pause, play, skip songs, and answer-end calls with a press.

The ‘buds also have “an enhanced skin-detect sensor,” so the AirPods only play when they’re in someone’s ear. They’ll also automatically pause if you put the ‘buds on a table.

The AirPods 3 also feature the easier pairing process introduced with the AirPods Pro. Simply placing the 2021 AirPods near an Apple device automatically pairs them.

Lastly, the AirPods 3 are also rated IPX4 sweat and water-resistant, so you can worry a little less about running with them in the rain.

So when can I get them?

Preorders for the Apple AirPods 3 are on sale now and will be in stores beginning Tuesday, Oct. 26. They cost $179, a small step up from the $129 AirPods 2, which are still available. Given the narrow difference in features between the AirPods 3 and AirPods Pro, you can probably expect that there will be an AirPods Pro redesign in the next year or so and that the new model will be more expensive than the current design.